I have a 89 bronco II Eddie Bauer. I am trying to installing a new head unit in it and I want to use the factory harness. From digging around on the internet I believe it has a factory amp some where, but I can't figure out where, or how to turn it on.

could someone tell me where to find the thing?

thats a good question. i would look and see how many plugs there are in the back of the old HU, if you have your simple red yellow black, and speaker wires i would think not. if you have extra, or another plug maybe, your really looking for a remote wire. start a trace with your speaker wires, if they all stay together. and go some were they might be going to the amp. if they all split up and look like there going to the speakers id say no amp.

how to turn it on, ummm look for a remote wire on the new pigtale, if one is lableled remote turn on and there is a matching wire on the oem side thats prolly it

I found it. Ford hide the thing really well. It's located on the driver side above the rear wheel well. I had to take the body panel off to get to it.

theres a factory amp in a bronco ii? wonder if my b2 has one its an upper model xlt thats news to me

Yeah, The Eddie Bauer edition had a premium sound system that included an amp

I'd be careful if it's a 4x4. Not sure on the B2, but the Explorer has the module for the electric shift transfer case mounted in that area. I tried to salvage one out of an Explorer in the junk yard and found some had ran a wire to it probably thinking it was the amp.

I can't find a pic I took at the moment.....but it's about an inch thick, maybe around 7-8 inches long, black rectangle with some aluminum cooling fins on it.

Whoa!! Funny I ran across this thread... I'm in the middle of installing a new headunit into my 1990 Eddie Bauer Bronco II. I tore the old headunit out and was disappointed at how small the wires were that were "going to the speakers." Then I realized that there was a wire to turn on an external amp, and it actually went somewhere on the truck. So I began thinking hmmm... Surely there's not really an amp in this truck??

But then I started pulling the speakers out to replace them with the Sony xPlod ones I got. And lo and behold, the wires are bigger at the speakers! So this thing did have an amp!! And now by chance I read this thread tonight and it confirms my theory!

I never really figured that my little standard ol' Bronco II had an Amp. Figured Ford would be too cheap to do something like that!

So can anyone give a more detailed description of where the amp is hidden? And also, is there any advice out there with regards to wiring a new headunit into this amp? What kinda output does this thing provide? Truthfully, I always thought the standard sound system was pretty good sounding, especially when I took into consideration its almost 20 years old.

I also pulled the factory speakers out, and they're in perfect shape, in fact they're 2 way speakers from the factory! In a 1990 BII! I was amazed. Of course their condition might be due to the fact that my Grandfather owned it from 1991-June 2009, and only listened to history cassette tapes on the Civil war with the thing... It probably never went above 25% volume in the entire 17 years he had it. But hey, what can I say...Ford quality at work right there! lol
Last edited: Dec 12, 2009

I know this is an old thread and I am really new but I found this and it is indeed the 4X4 controller. It clicks every time the 4X4 or low range is pushed. Here are location pics. 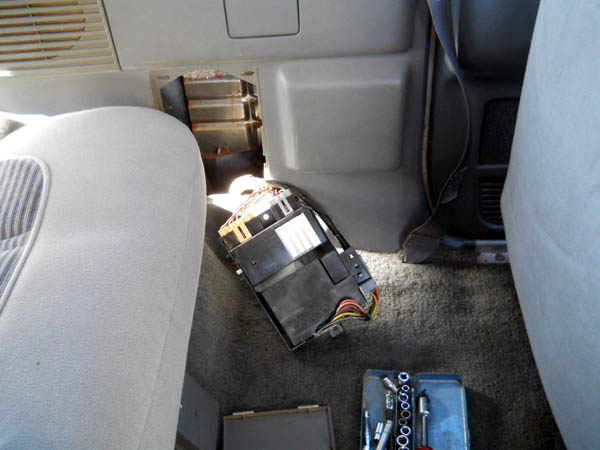 On my 89' that's where the ABS ECM is located....according to the Haynes manual that is.

Well , on this 89 it clicks when the 4X4 button or Low range button are pushed. Maybe it also works the ABS ??
Mike
D

It would seem to me (so far) that there can be many quirks , in the B2's
W

The amp is in the dash towards the passenger side under a little metal cover....

alaskan155 said:
theres a factory amp in a bronco ii? wonder if my b2 has one its an upper model xlt thats news to me
Click to expand...

Only if it has the premium audio system, otherwise no it won't have an amp, and its not much of an amp in the first place.
W

That's the 4x4 module, the only place the amp was ever located was up in the dash just to the left of the passenger speaker under a metal cover with 2 screws in it.


Photoshop services:
Low prices and high quality workmanship!!!
Working with layers/masks
Change background/composition
Correction of flaws in the photo (figure / face, extra / missing elements / alignment / deformation)
Creation of realistic collages, work with lighting/color/filters.
Site layouts, headers for VK groups, instagram avatars and so on...
Everything about photoshop is for me!
You can view the portfolio on the website https://vk.com/kabanova_ps
Contact Dizaynmaks telegram
You must log in or register to reply here.
Share:
Facebook Twitter Reddit Pinterest Tumblr WhatsApp Email Link