Hello! I apologize for my English =)
My name is Alex, im 23, im from Russia)
I would like to show my bronco 2 and say that there are several live cars in Russia =)
I bought my Ford for (near 4200$) in very poor condition, it was killed on offroad, the gearbox had dirt inside, body was beated and rusty, engine was poor and its died in a month
I repaired the body, painted it, installed the engine 4 liters from the Ford Explorer(because 2.9 was very bad), the suspension also from the explorer (35 dana + 8.8 LSD)
then decided to find a chrome bumpers,
I'll tell you that this is not a simple task, some parts we need to purchase from Rockauto, and thats a Pity: cost of part, for examle 10$ and 20-40$ we need pay for delivery(
I installed Fenders from Russian military SUV (UAZ)
The salon was also repaired) Now its like new (maybe better
it was really hard to find visor (above the windshield)
I also remade the exhaust system, put the straight-through silencer sideways
My bronco is really rare car for my country and city (I live in Moscow) and it always "get some likes" on the road)
Now i bought tires BFGoodrich 33/12,5/15 and its looks very nice)

Now i cant find horses from left and right sides car (i hardly find "bronco2" emblem. it was on the other side of country
Last edited: Dec 13, 2018

My credo
Hold my beer and watch this!

She looks great. It's cool to see that the Bronco II made it around the world. Good job on the build and keep it up.

Great looking Bronco 2, great job on the repairs/restore. I'm replacing the engine in my 88 Bronco 2 here soon but it'll be getting the 2.9L replacement which gives me a 3 year, 36,000 mile warranty otherwise I'd be stuck with nothing as they have to have the VIN when you order an engine to match it to the vehicle...weird, how the heck to people get crate engines for a vehicle that the engine doesn't go to then...

Finding the emblems is definitely a huge issue, I finally found the spare tire cover for my Bronco 2 and paid dearly for it, but at least I have it and it is correct not just a random full size Bronco one.

Did you import the vehicle to Russia or was it already there? Didn't know they sold them there which is why I'm curious as to how it ended up there, someone paid a lot of money to have it brought over there at some point I assume.

Did you do anything to the suspension so it would sit higher and make room for the bigger tires, or did you get the room for the tires by cutting the fenders?

You aid "The salon was also repaired". What is the salon?

Can you show us some more photos? Maybe the inside, engine, and more photos of the outside?
M

The car was brought to Russia in 1997. Before me, it already had 9 owners in our country

Firstly i want to show how i repair the inside space (google says its called "saloon" but im not sure)
Floor was rusty, so i used welding. There are many many holes in the floor of car
Then I put mastic on the floor and laid the carpet
I have seats from Explorer. There were in bad condition. I ordered seats cover for my model with emblems)
then i repaired the ceiling. It was in terrible condition, like a puzzle. I repaired it with carbon material and special glue
The front side of the ceiling I wrapped velor in color very similar to what it should be 30 years ago (maybe a little brighter)
All plastic was removed, pasted with foam rubber (so that there were no unnecessary sounds) and painted with red paint

I can't attached more photo in 1 post, so i'll do it later, and tell you more about what was done with this car)

answering the question about large wheels
Fenders were cut (about 2 inches)
also about 2 inches of suspension lift (so 33' tires fit in with no problems)
Last edited: Dec 13, 2018

You did start with a peace of S#$T. Nice Job. It looks great

You have done some great work on that Bronco 2. Great job.

Wow, I love those seats.

How did you raise the suspension 2 inches?
W

Good job on restoring it! The fenders look aggressive.
M

Hello everyone! I haven't written for a long time.
Managed to do a lot with Bronco. 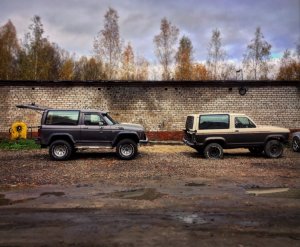 With the big help from my friend Alex we Served the suspension, installed new details in the rear axle, installed a new LSD lock.
I changed the brake pipes, leaf springs. Water pump and fuel pump and etc etc etc. 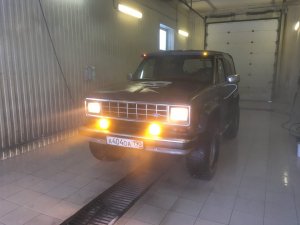 But the main news that i Bought Big Bronco =) 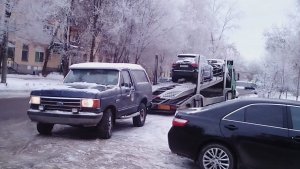 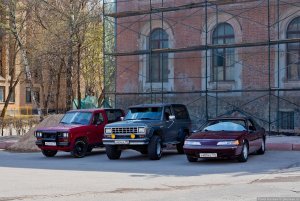 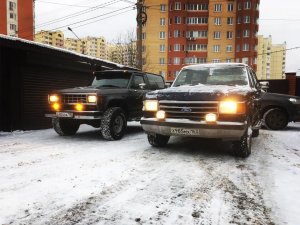 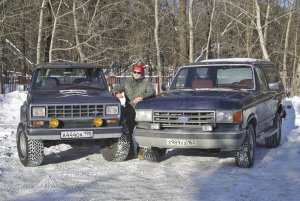 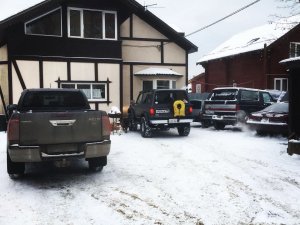 there is a lot of work on the new bronco, new springs are needed, the engine needs to be repaired (knocks and extraneous noise, poor oil pressure)
but I am very glad that I was able to purchase this car. I hope that in a few years it will turn into a brutal and beautiful SUV, which will not be ashamed to ride on the roads with AC/DC sounding from the windows