The 2.8 carbureted V6, used in 1983-1985 Rangers, and 1984-1985 Bronco II’s, had a computer controlled feedback carb and a distributor that had its timing completely controlled by the computer. There is no mechanical advance in the distributor. Ford called this ignition system TFI (Thick Film Integrated). When functioning properly, this system delivers good performance and fuel economy. But when you factor in 20+ year old wiring and bad or missing components, poor mileage and power result. To rid yourself of this computer that constantly tries to adjust the timing and mixture, and often adjusts it wrong, you can convert to the standard electronic ignition and carb that was used on the 70’s 2.8L-powered Mustang II, Pinto, Bobcat, and Capri vehicles. This lets you set the tune of the engine, and it stays in that tune, instead of constantly varying as with the TFI system.

For 1985 vehicles, there are some extra wires that need to be spliced together.

For 1985 vehicles with the A4LD Automatic overdrive transmission:

Get a GM switch (14014519) and connect it to the solenoid that goes to the lock up. In the line, also install a switch on the brake pedal that will break the circuit when the brake is applied. All you have to do is to drive normal and everything will operate as it did with the computer. I would not use a toggle switch. It seems like it would be a hassle trying to remember to cut it off and on while going down the road.

Now lets go back a little. The hot wire that I ran to the one side of the solenoid comes from a fuse that I installed form inside. It goes from the fuse to a second on/off switch that I mounded on the break pedal. So when I put on the brake, it opens the circuit.

Ford in England did the cars with the A4LD this way. The cars did not have the computer but used a vacuum switch that was made for Ford. These switches are very very hard to find. These cars were the England Granada’s , Merkur and a few others. They had the 2.8 with the A4LD. So you are not doing anything different than what Ford designed for those cars. Since I could not find a Ford vacuum switch, I used the GM switch. In fact, GM controlled their transmission lock up converters with this switch and a dual brake switch that open the circuit.

This is NOT considered smog legal. You may be able to remain smog legal by hooking up your EGR, air injection, and ECT, according to the way they were on a 70’s 2.8L. I make no guarantees to you that you will pass smog, or any other warranty or guarantee of your mechanical competence. If you mess up your rig, you’re on your own.

Canister style coil for a Duraspark vehicle or an Accell or MSD style canister coil.

While you’re looking for the harness, grab the coil mounting bracket too. However, if you don’t, an aftermarket universal coil bracket will work.

If you can’t find one, don’t worry. You can just make your own by using wire to connect to same color wires together on the distributor and module, and then run “Key-On” 12V power to the (+) side of the coil, and the green module wire to the (-) side of the coil.

Carburetor: The 78 Pinto carb works well on stock engines. If your 2.8 is more performance oriented, or has headers and upgraded exhaust, you may want to use the 350CFM Holley 2V carb. This carb comes jetted for a V8 with ~#61 jets. A good jet size to start tuning a 2.8 with is #54 jets.

What about the stock feedback carb? Well, I ran it with everything unplugged for a while, but it ran too rich. Also, many have warped castings. I’ve run into several.

Ignition module: Either get a module from the junkyard, or get a new one for a 78 Pinto. Either way, you want to make sure the plastic grommet where the wires come out of the module is the “blue” colored one. New is about $20.

First, most people remove the computer and its associated wiring along with the solenoid bank on the passenger fender well.

The easiest way to start is to locate the temperature sender for the gauge or light, the oil pressure sensor wire, and the three alternator wires. Separate them from the computer harness, and remove the rest. 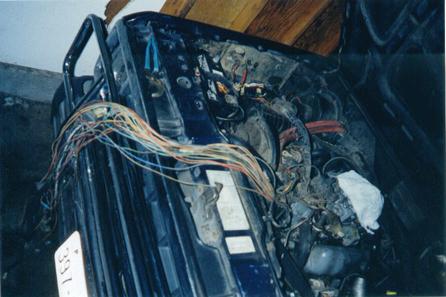 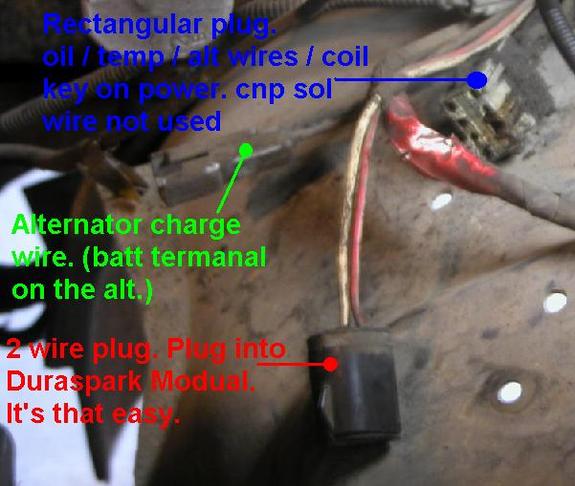 Use the wire from the rectangular plug that ran to the (+) (power) side of the stock coil to power the (+) side of your new canister Duraspark style coil. If you went and got the distributor/coil harness from a Duraspark-equipped vehicle in the junkyard, this is a plug in. If not, hook that wire to the (+) side of the coil, and the green wire from the module to the (-) side of the coil. I mounted my coil to the bottom wiper motor bolt using a ford coil bracket. Aftermarket brackets work after some bending.

Plug the module’s distributor plug into the harness and plug that into the distributor. Plug your alternator wires and temperature/oil sensor wires back in and wrap them with some electrical tape. Reuse some of the old harness conduit, or use some new, smaller diameter conduit.

For the electric choke, run a wire from the stator terminal on the alternator to the electric choke. This is the way Ford did it on factory Duraspark rigs. This way, the choke only gets power when the engine is running, and it doesn’t open too quickly.

Set the base timing (I set mine to 12 deg), set the carb mixture, and enjoy your new better running ride. 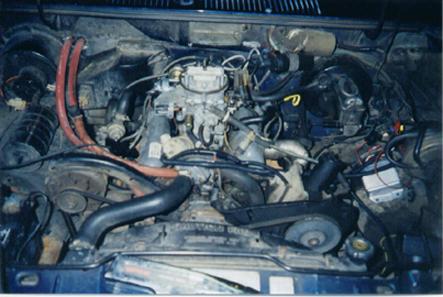 Some hook the distributor’s vacuum advance up. I didn’t, and I’ve found that others who have done this have better power without the vacuum advance hooked up. 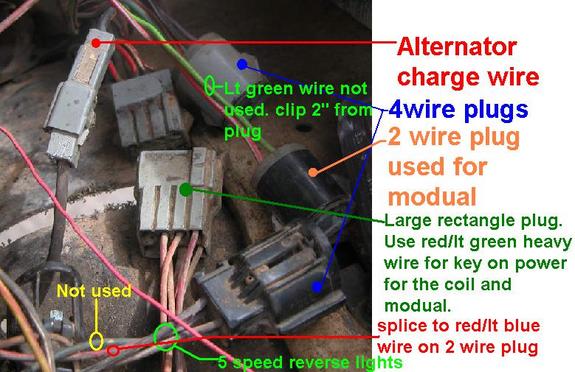