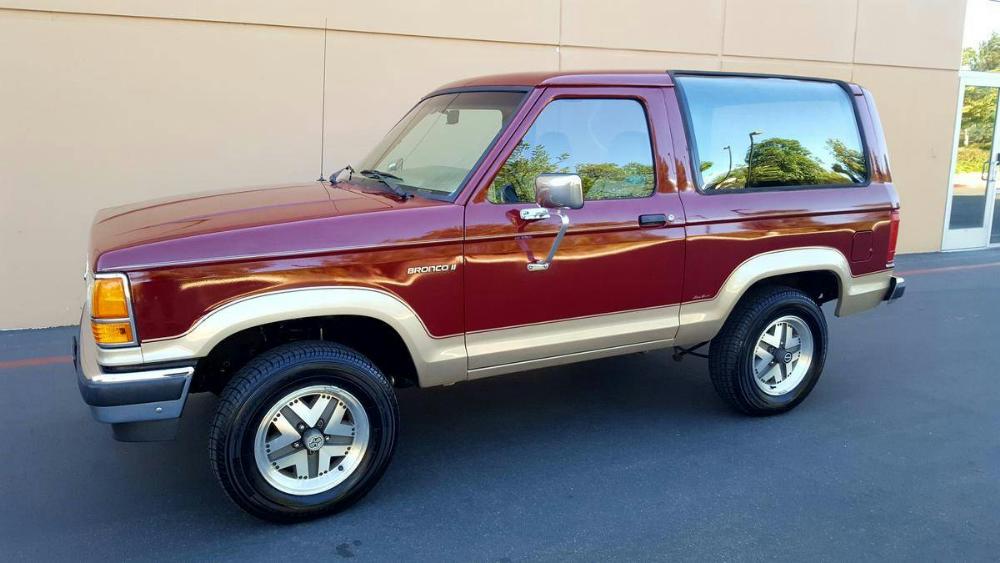 The Ford Bronco II was built from 1984-1990. Although it only had a 6-year run, there are still a lot of them left out there for sale. From time to time you can even find them in pretty great condition like the one shown above. Since you’ve came to this site to read this article, I am going to assume that you’re an off-road or adventure travel enthusiast, and will focus this article on that. 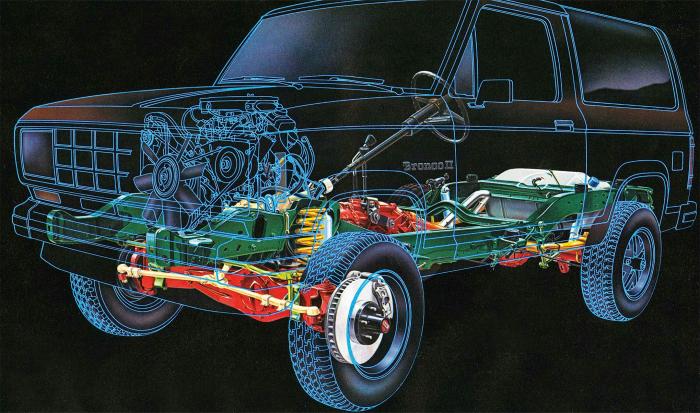 2.8L Engine: The 1984-1985 Ford Bronco II came with a 2.8L 115 Horsepower V6 Engine. This is a pretty simple engine that uses a carburetor, but the TFI module has been known to cause people problems. The purpose of a TFI module is to control the spark output of the ignition system. A signal is sent from the TFI to the ECU, where the ECU processes the received signal and correspondingly outputs the correct spark control for engine timing (advance/retard). Many people have eliminated the TFI by doing to a Duraspark Ignition Conversion. A unique feature about the 2.8L is that it uses a timing gear, instead of a timing chain that can stretch or break.

2.9 L Engine: The 1986-1990 Ford Bronco II came with a 2.9L 140 horsepower V6 engine. Unlike the earlier 2.8L, the 2.9L is fuel injected. The only real issue with these engines is that the cylinder heads were known to crack on the 1986-1988 models. The cylinder heads underwent a redesign for the 1989 model year, receiving additional material in problem areas, largely eliminating this specific failure. These head casts are commonly printed with the “89TM” designation. If you’re buying a 1986-1988 Ford Bronco II, you’ll want to check the engine oil for signs of engine coolant.

A4LD Automatic Transmission: The A4LD transmission used in the Ford Bronco II were known to fail. Often. Be aware that if you use this transmission off-road, it will not last very long.

C5 Automatic Transmission: The 1984 Bronco II came with a C5 automatic transmission. The C5 was a medium-duty, three-speed transmissions. The main difference between a C4 (not offered in the Bronco II) and a C5 was that the C5 had a lock-up clutch to improve gas mileage on the highway. The C4 was a case fill transmission with the dipstick in the case; the C5 employed a pan fill with the dipstick in the pan. This transmission is less prone to failure than the A4LD that replaced it. Some people have used the tailhousings and output shafts from the 4×4 version of this transmission in a C4 so they could do a V8 swap.

Manual Transmissions: The 4 & 5-speed transmissions used in these vehicles do not have any real problems, and will out last the automatics.

BW1350 & BW1354 Transfer Cases: The 1350 has a splined front receiver where the front driveshaft slides in. The 1354 has a yoke on the front that accepts a u-joint and holds it in place with straps. The BW1354 was only used in the Bronco II during the 1990 model year. The 1350 and 1354 are produced as a mechanical shift and electronic shift. These are both good transfer cases. Between the two, the BW1354 is the more desirable unit since it uses a front yoke and not the splined receiver. I have actually seen the front driveshaft slide out of a BW1350 after the front suspension dropped down to far while off-road, and pulled it out of the transfer case.

Ford 4.0L V6 Swap: The Ford 4.0L OHV out of a Ford Ranger or Ford Explorer has been a popular swap in Ford Bronco II’s. This engine produces 160 horsepower and ft-lbs of torque. If you swap in the engine, transmission, and harness from a 1995-1997 For Ranger, you will benefit from the stronger 4R55E automatic transmission.

Ford Rangers used the 60-wire EEC-IV computer thru 1994 (OBD-I). 1995 and up used the 104-wire EEC-V computers (OBD-II). The EEC-V computers (1995+) need a rear O2 sensor after the catalytic converter. So the added wiring is the reason you would look for a donor that uses EEC-IV (1990-1994) wiring and harness. It’s a simpler swap wiring-wise. The EEC-V is certainly doable, but only to 1997. After that you have PATS (passive anti-theft) to deal with, and speedometer issues.

PATS started in 1998 in Ford Explorers and 1999 in V6 Rangers. All lost speedometer cable hook up by 1998, even on transfer cases.

For more information on 4.0L swap, vist the Tech Library.

When using an automatic transmission and 4WD, you’ll need to get a new tailhousing and output shaft to adapt a Ford C4 or AOD to accept the Bronco II’s BW1350 transfer case, or get a C4 automatic from an early Ford Bronco 4×4 with a Dana 20 transfer case. 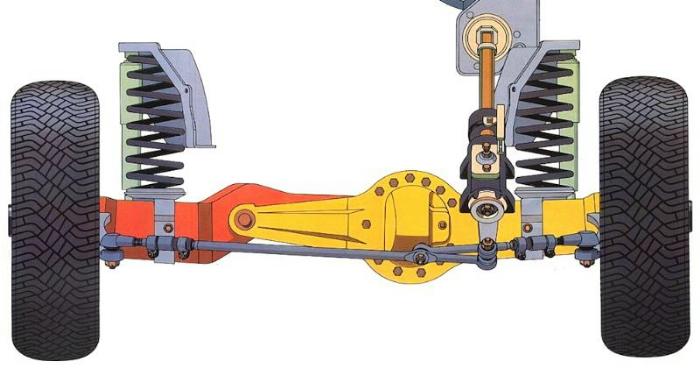 Twin Traction Beam (TTB) Front Suspension: The TTB is an independent front suspension in the sense that each side of the front vehicle has its own axle beam, coil spring, and radius arm. The TTB came as either a Dana 28 (1984-1989) or Dana 35 (1990). Both were reverse rotation differentials.

The photo below shows the 4WD Ranger front suspension, and the driver and passenger TTB axle beam. The end of the beam has a bushing in it, and bolts in to a suspension bracket on the trucks frame. This allows the axle beams to pivot independent of each other. 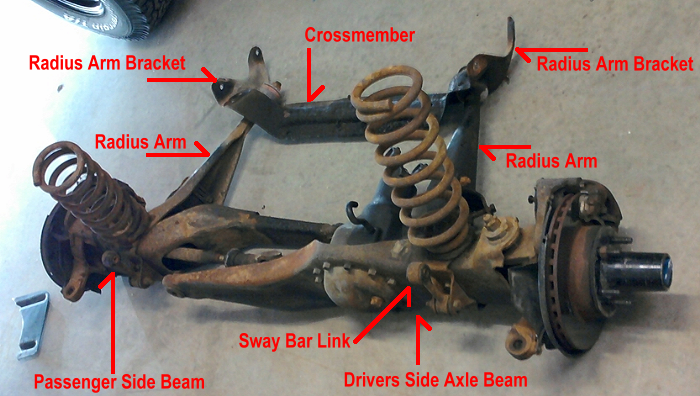 Dana 28 Axle: The Dana 28 had a small 6.625-inch diameter ring gear, and small 1.00-inch and 23-spline axle shafts. It also used small 456x u-joints. This axle was offered from 1984-1989. There are no longer any after parts available for this axle. Click HERE for more information on these axles.

Dana 35 Front Axle: If you don’t have a 1990 Ford Bronco II with the Dana 35, then you should seriously consider upgrading your stock Dana 28 to this axle. The Dana 28 can really only handle a 31-inch tire, and the axle no longer has aftermarket support if you’re looking to re-gear it or add a locker. This axle is pretty strong, and shares the same u-joints as the Dana 44. The weak link is the flange style locking hubs, and I would strongly suggest that you upgrade to the Dana 35  Warn 37780 “Jeep” hub. These are a direct replacement for the Dana 35 Warn 29071 hubs. The Dana 35 is good for up to a 35-inch tire.

Dana 44 Front Axle: If you plan on going with a 36-inch or taller tire, you’ll need to switch to a larger axle. Many people have switched to an early Ford Bronco Dana 44. I’ve never been a big advocate of these swaps because these early Dana 44’s had small 260x u-joints.  James Duff makes swapping one of these axles in to your Bronco II easier, but you may want to consider a stronger Dana 44 from a full size Ford truck.

Suspension Lifts: A suspension lift will not only make room for larger tires, but it also moves the frame and drivetrain higher up from the ground. This will provide more ground clearance off-road. BUT, only tire size will affect how much room is between the axles and the ground.

Body Lift: A body lift is a 2-inch or 3-inch spacer (3-inch is most common) that is bolted between the frame, and the body mounts. This will lift the body and make room for larger tires. It’s much cheaper than a suspension lift, and doesn’t increase your center of gravity as much as a suspension lift would, since the frame and drivetrain have not been raised.

Cut Fenders / Fender Flares: Another method of increasing tire size is by cutting the fenders and increasing the size of the wheel openings. Some people bolt on fender flares designed to cover the cut out openings (and cover the wider tires you’ll be adding), and some use a trim material along the edges of the cut to clean up the look, and protect from the sharp edges. Some cut the fenders and don’t use a flare at all.

Some people use a combination of suspension lift, body lift, AND cut fenders.

There are only (2) manufacturers that I would recommend when it comes to lifting your Ford Bronco II: 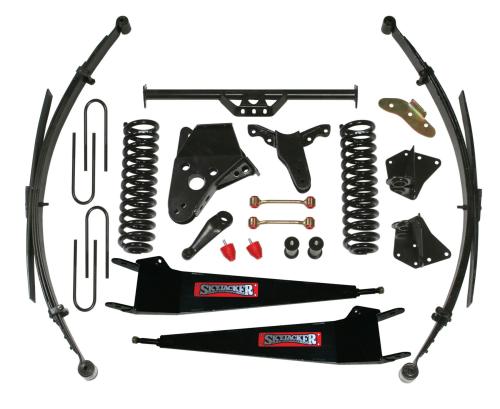 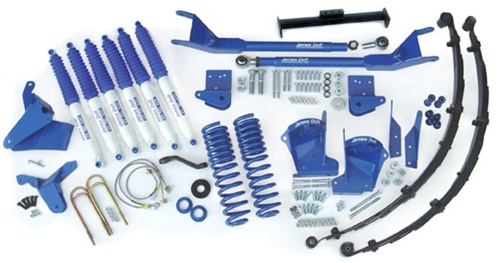 This is one of those topics that I think is overlooked and needs mentioning. People will buy a cheap lift kit to save money, or piece together their own lift with used parts. I strongly suggest you stay away from lift kits or suspension brackets that use a drop plate for the passenger beam pivot bracket. 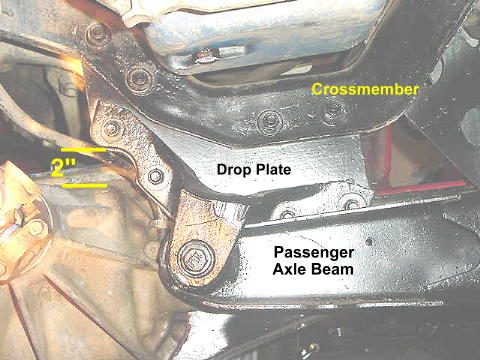 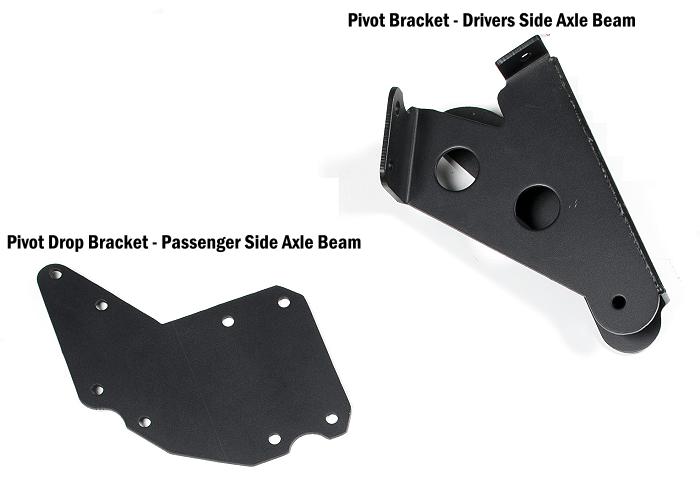 The photo above shows lift kit brackets that use the drop plate method. The photo below shows heavy duty brackets that includes a complete replacement passenger beam pivot bracket. 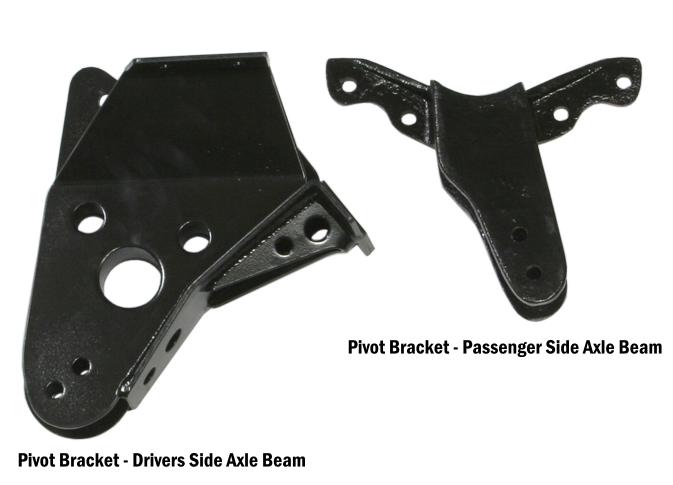 It’s because of these brackets, that I only recommend the Skyjacker or James Duff kits for your Ford Bronco II.

Some other pages you may find helpful are:

Here are some photos to inspire you – Click the images to enlarge – Click the arrows to load more. 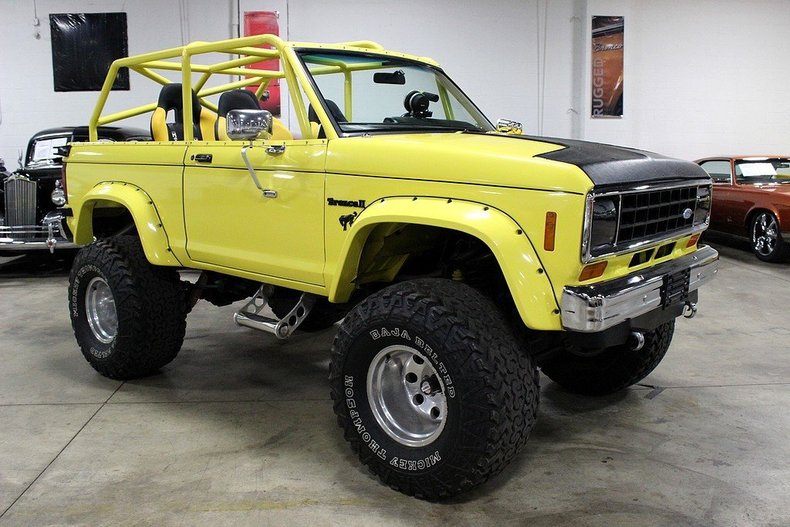 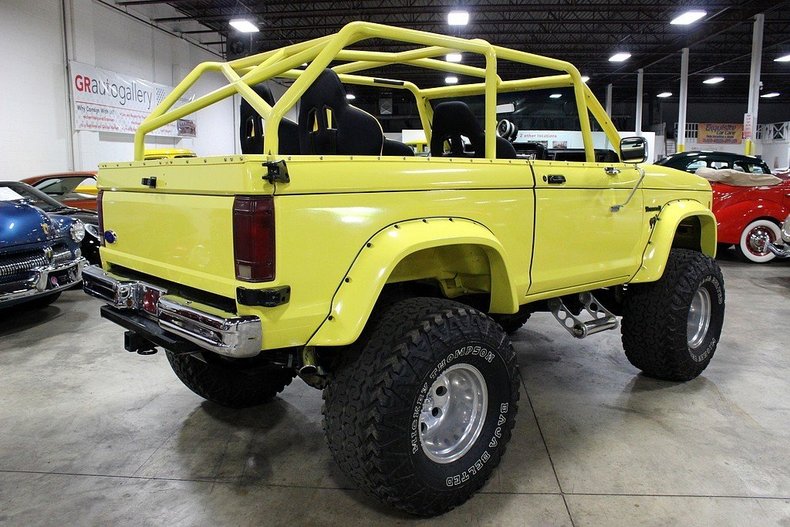 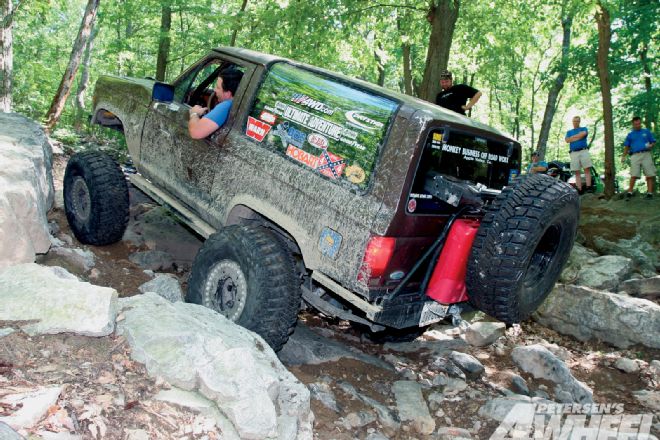 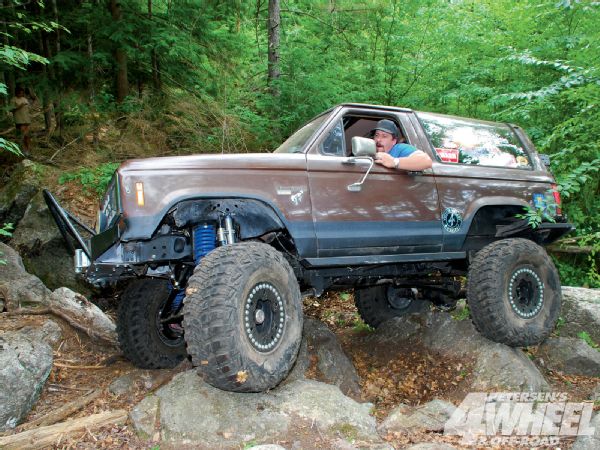 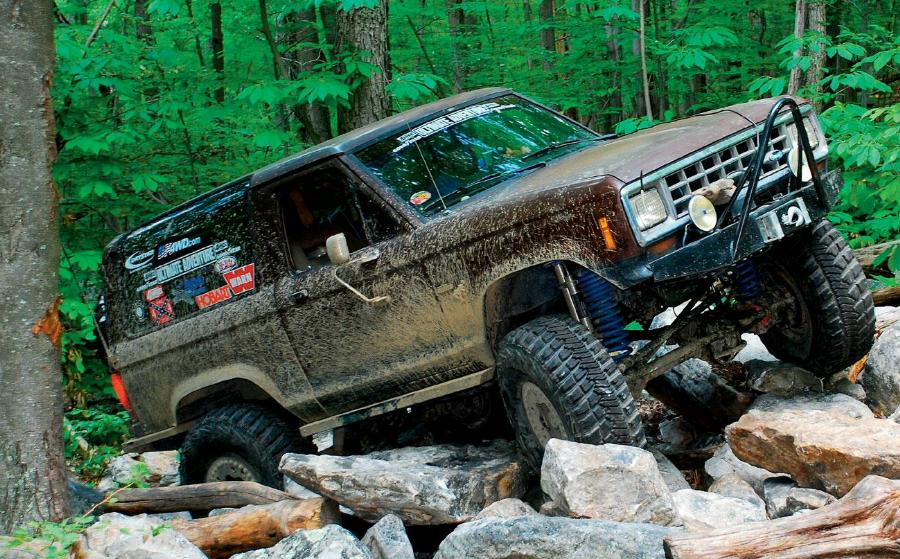 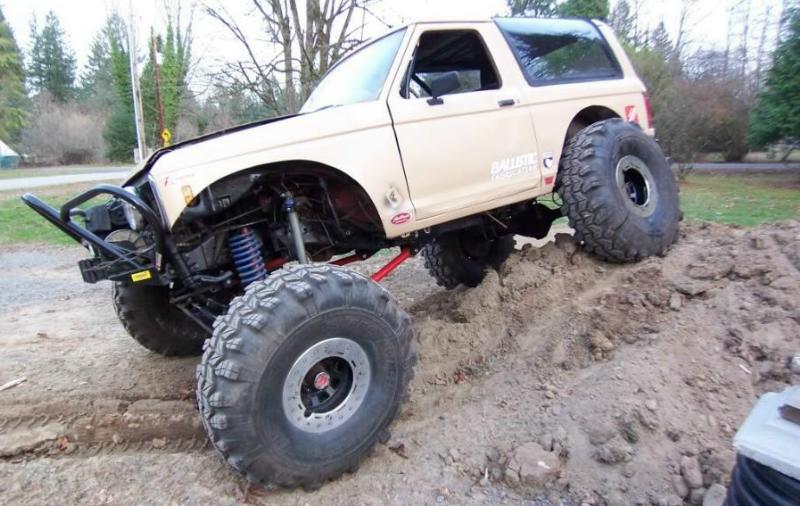 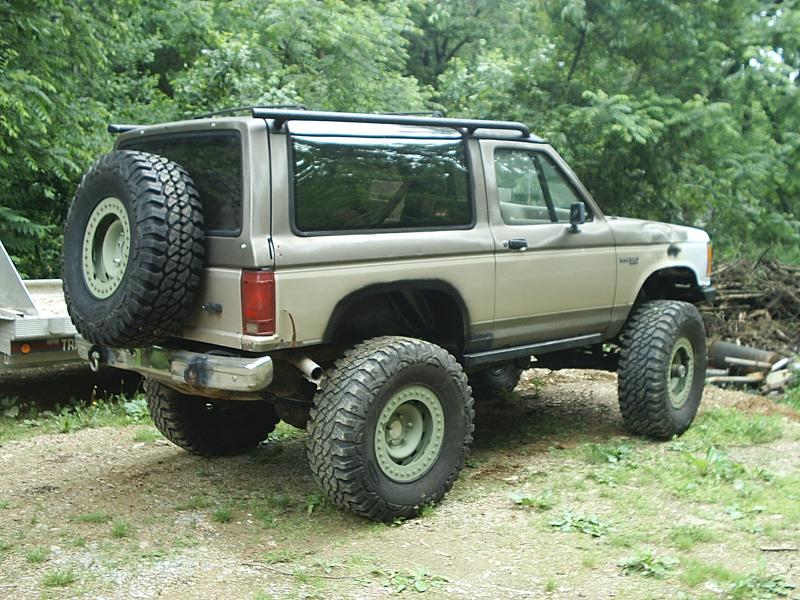 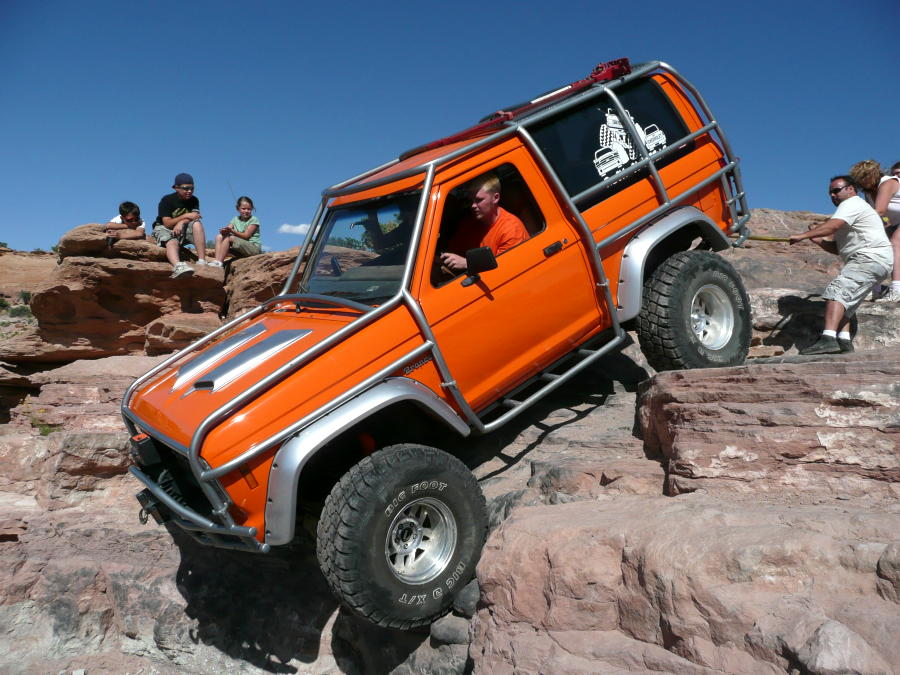 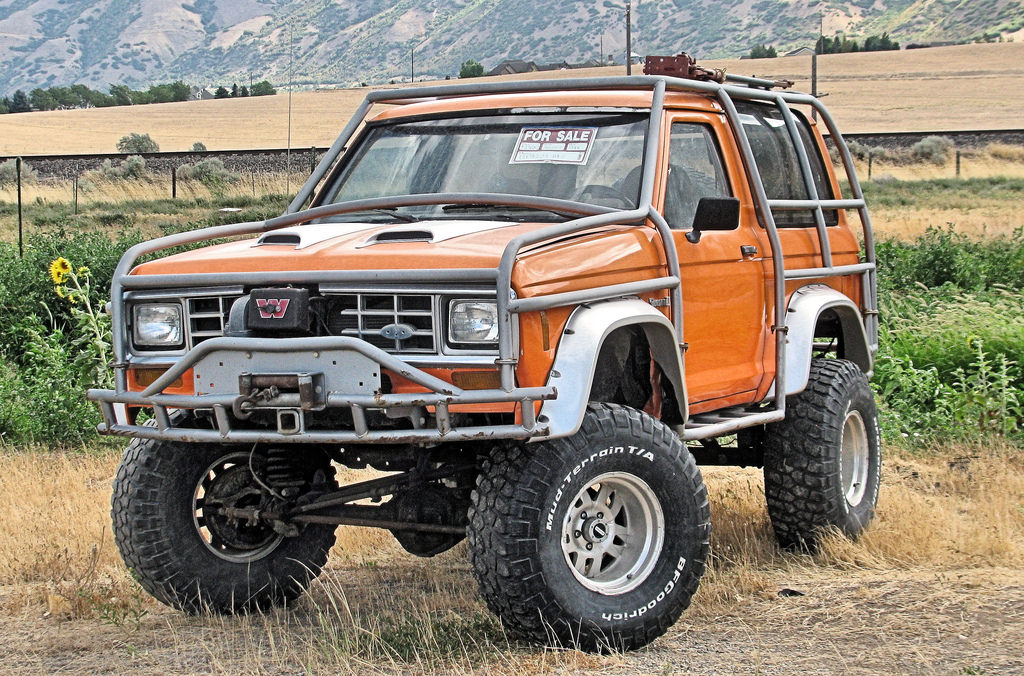 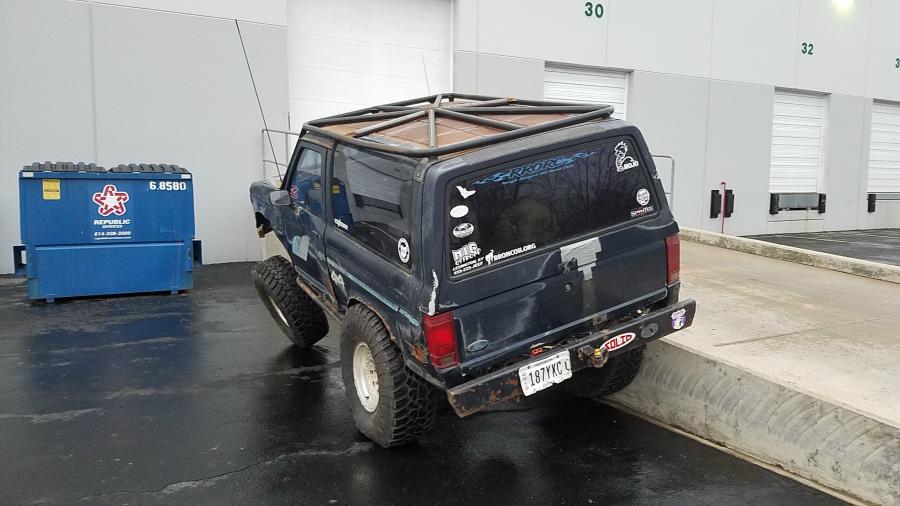 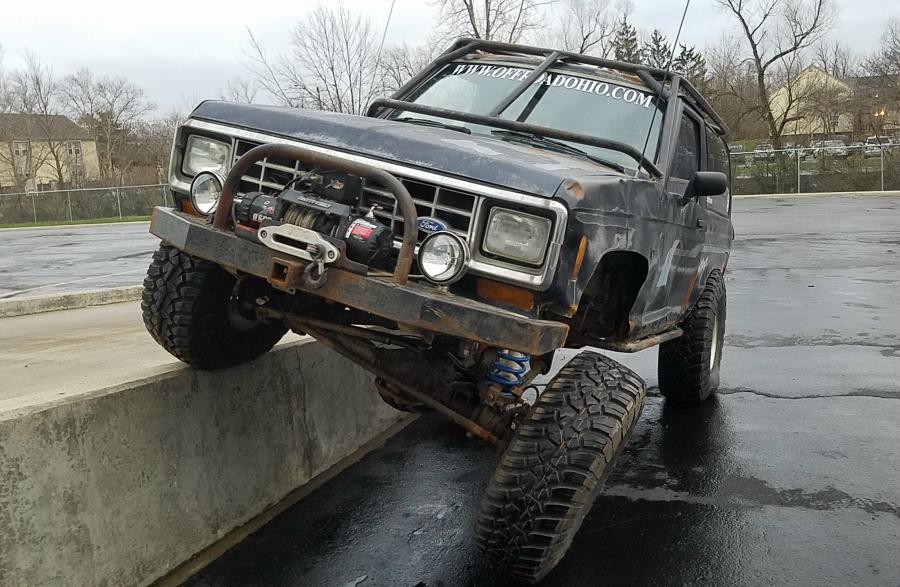 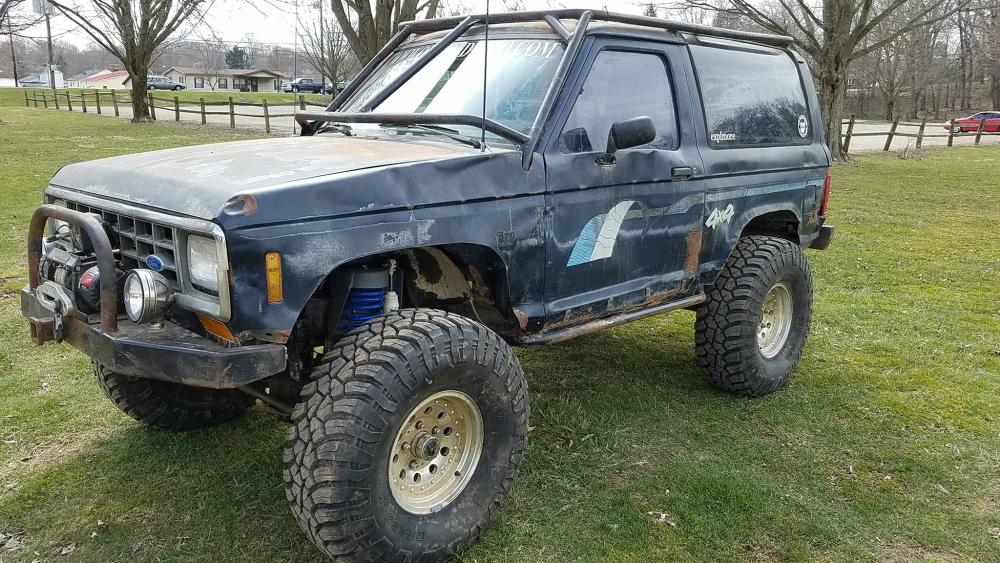