Here’s how you can get rid of that terrible TFI Ignition and replace it with a Duraspark Ignition. 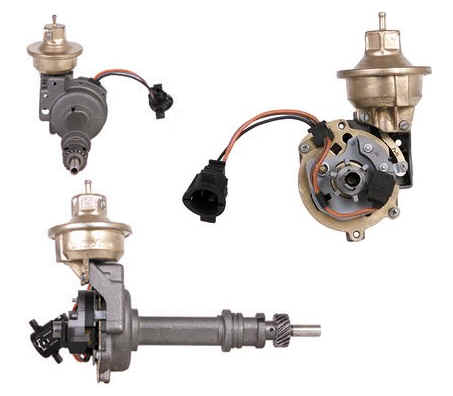 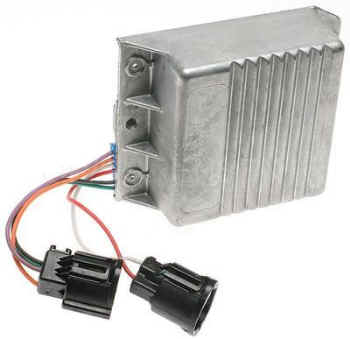 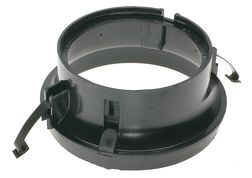 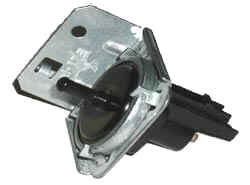 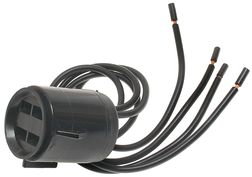 The 2.8L V6, as found in Rangers and Bronco II’s from 1983 to 1985, are saddled with a rather bizarre fusion of EFI and carburetion in the form of the EEC-IV controlled Motorcraft carburetor and TFI ignition. Some people choose to replace this ignition with an earlier Duraspark ignition. The stock “feedback carburetor” should also be replaced with an earlier non emission controlled 2 BBL carburetor to make this conversion function properly. You can get a 2 BBL carburetor from a Ford 2.8L that had a Duraspark ignition or upgrade to a Holley 350 CFM 2 BBL carburetor P/N 0-7448. This will eliminate the need for, and make the stock EEC nonfunctional. This is not a complicated swap. Not as complicated as people make it sound.
Quick Overview:
You’re going to be replacing the factory ignition with a Duraspark distributor, coil and ignition module. To wire the new ignition on a 1983 – 1984 Ranger you simply plug it in to an existing plug and then wire the coils (+) ‘BAT’ to the Red/Light Green wire that’s hot when the key is on.
There’s more splicing involved when wiring the ignition on a 1985 Ranger. Basically you’ll be powering the Modules Red wire in the plug with the Rangers Red/Light Green wire and the Modules White wire with the Rangers Red/Light Blue wire. The coils (+) ‘BAT’ is powered by the Rangers Red/Light Green wire.
Now for the more in-depth details………………

Remove the entire wiring harness from the engine except for the Electric Choke, Engine Temp and Oil Pressure sending units wiring. Leave the wiring to the alternator as well. If you have air conditioning you will have a couple wires going to that as well. . This should remove about 95% of the wiring out of the way. Just lay it over the passenger fender for now. You may have to cut some of the wires such as the Red with Light Green wire that supplies power to the TFI module as well as the ECM. There is usually a big splice where it is routed to the necessary locations. Remove all the vacuum lines lines to the EGR and carburetor. If you have not already removed the smog pump now would be the perfect time to do so.  Just plug the lines that go back to the exhaust manifolds and cat converter. Remove the EGR valve and make a metal block off plate out of thin sheet metal to block off the EGR port on the carburetor spacer. Reinstall the EGR valve just to plug the hole. Install a vacuum cap on top of the EGR valve’s vacuum port.

If you have a 1983 or 1984 Ranger/Bronco II you’re in luck.  There is a factory round Duraspark style plug with Red and White wires at the drivers fender well. It will plug in to the plug with White and Red wires on the Duraspark Ignition Module. Don’t be alarmed when you notice that a Red wire plugs into a White one and vice versa. This is correct.

The (+) ‘BAT’ side of the Coil is the only place you have to splice into a wire. On the driver’s fender well, there is another connector, square in shape and gray in color that has either a Brown wire with Pink markings or a Red wire with Light Green.  These wires should be hot when the key is on. This wire needs to go to the (+) ‘BAT’ terminal on the ignition coil.

Many found, that after installing the module, distributor, harness, and coil, that the plug with the Red wire and the Light Green wire on the 1985 Ranger that connects to the Red and White wires on the Duraspark Ignition Module does not supply power to the module like it should. It was also found that without some cutting and splicing, that the engine would also not even turn over. This isn’t that difficult to overcome.

Both of the wires (Red & White) in the plug on the Duraspark Ignition Module are both used for power input to the module:

Red wire (Modules 2-wire plug) – This wire needs power when the Key is ON.

White wire (Modules 2-wire plug) – This wire needs power from the key in the START position.

Plugs to look for:

There are two round Duraspark style plugs at the drivers fender well:

Plug #2)  4-Wire Duraspark type female round plug. The 4-wires are:

2)  Run a wire from the Red/Light Green wire to the (+) ‘BAT’ side of the Ignition Coil to supply power when the key is ON.

Your distributor has an Orange/Yellow, Purple/Light Blue & Black/Light Green wire coming off of it.

Your Duraspark Ignition Module has an Orange/Yellow, Purple/Light Blue, Black/Light Green, and Dark Green/Yellow wire coming off of it.

You can go to a salvage yard and pick up a wire harness from a late 70’s or very early ’80 Ford car/truck with the Duraspark ignition to run between the Distributor and the Ignition Module.  Your other option is to simply make your own harness with 12ga wire and female connectors and match the plugs up color to color.

Using The A4LD Transmission With This Conversion:

The A4LD automatic overdrive transmission is a Ford C3 automatic transmission modified with the addition of overdrive. The first version of this transmission has a single electronic control solenoid located in the valve body that moves a valve allowing transmission fluid to flow into the TCC (torque converter clutch) circuit of the transmission. When fluid flows through this circuit it causes the engagement of the TCC. This process is known as “converter lockup”. The timing of this lockup is controlled by the ECA (Electronic Control Assembly). The purpose of the clutch is to create a direct positive connection between the engine and transmission. This reduces slippage, thereby limiting the workload on the engine which improves power transmission to the driveline, and fuel economy. Normally the clutch should only engage at a steady highway speed (approximately 45+ MPH) with the transmission shifted into overdrive.

The later models incorporated electronically controlled overdrive as well. This was achieved with the addition of one or more control solenoids for this process.

Ford only offered the first version of this transmission for 2.8L powered Rangers and Bronco II’s in 1984, and 1985. In 1986 the OD position on the shift selector was removed, and replaced with an electronic OD shift button. Vehicles equipped with the early version of this transmission require additional steps to complete the Duraspark conversion.

It could be possible to control the converter lock up with a toggle switch. The only drawback is you have to judge the correct time to engage it and disengage it yourself. The control solenoid is similar to a relay switch. It is controlled by two wires, positive and negative. The positive wire receives a constant 12V. The negative wire is a controlled ground. This means that with a functional ECA, the computer uses a switching circuit to connect and disconnect the ground. This completes, or breaks the circuit. If you’d like to try the “Toggle Switch Method” this method this is how to do it.

Unplug it and using a test light find the 12V power lead. Now you know the other wire is the ground.

Using a length of 16AWG wire long enough to reach into the vehicles passenger compartment butt connect this wire to the ground wire using a 16AWG butt connector. Plug the connector back in.

Route the wire up into the passenger compartment near a suitable switch mounting location. Connect the wire to one terminal of a SPST (Single Pole Single Throw) 12V toggle switch. Using a short piece of 16AWG wire connect one end to the other switch terminal and the remaining end to a good ground. Mount the switch and test it out.

The second method we have for you utilizes a pressure switch. This is an automatic engagement solution. The pressure switch is installed in the governor portion of the transmission body. When the fluid pressure reaches the switch tolerance the switch closes completing the circuit and energizing the solenoid. This should occur at highway speeds (45+ MPH) when shifted into overdrive

Use the same instructions in the above procedure to determine which wire is the controlled ground.

1)  On the passenger side of the transmission toward the back at the bottom near the tail extension locate a protrusion with a hole in the center which resembles a bolt boss. This is the governor area of the transmission. Using a 3/16″ drill bit coated with grease to collect shavings carefully drill in the center of this hole until it punches through into the internal chamber

2)  Start the engine and let it run for about a few seconds which will force out any remaining shavings (transmission fluid will stream out forcing the remaining debris out).

3)  Using an 1/8″ pipe thread tap, tap threads into the boss about 1/2″ deep. It may be necessary to open up the hole a little prior to tapping. Use the size drill bit recommended on the tap. Run the engine again to force out remaining debris.

5)  Run a hot wire to one side of the transmission plug and the other wire to the controlled ground pressure switch. Drive the vehicle and once you reach highway speed (45+MPH) shift into overdrive and pay close attention to the feel of the shift. If it feels firm and you don’t experience erratic “in and out” OD shifting then you were successful. If it does shift “in and out” erratically you may need to experiment with different tolerance pressure switches until you find what works best for you 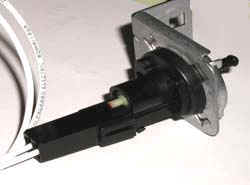 The last way to control the solenoid is with a Vacuum Switch.  The control solenoid is similar to a relay switch. It is controlled by two wires, positive and negative. The positive wire receives a constant 12V. The negative wire is a controlled ground. This means that with a functional ECA, the computer uses a switching circuit to connect and disconnect the ground. This completes, or breaks the circuit.

Locate the solenoid connector on the transmission toward the drivers side front on the top of the pan lip.

Unplug it and using a test light find the 12V power lead. Now you know the other wire is the ground.

Butt connect a new wire to the end of the ground wire you stripped coming from the solenoid connector and run the wire in to the drivers compartment.

You need to install a switch where the stop light switch is at the brake pedal.  This new switch should normally be open so power runs through it until it’s pressed. We haven’t found any Ford part numbers but we know that the GM brake switch P/N 25524848 has two connections; one for the brake lights that’s closed and opens to send current to the brake lights when you press it.  The other is open for the cruise control and interrupts (breaks the connection) when you press it disengaging the cruise control.  We don’t know for sure if this can be mounted on the Ranger.

From the brake switch, the wire needs to go to a Vacuum Switch (GM P/N 14014519).  From the vacuum switch the wire goes to ground.

>Once you complete this, the torque converter will go in to lock-up except for when the vacuum is low (under throttle) or when the brakes are applied.

Parts stores supposedly carry this part but we don’t have the part numbers for them yet. Give them the GM P/N and see if they can look it up.

For their contributions to this page over time.