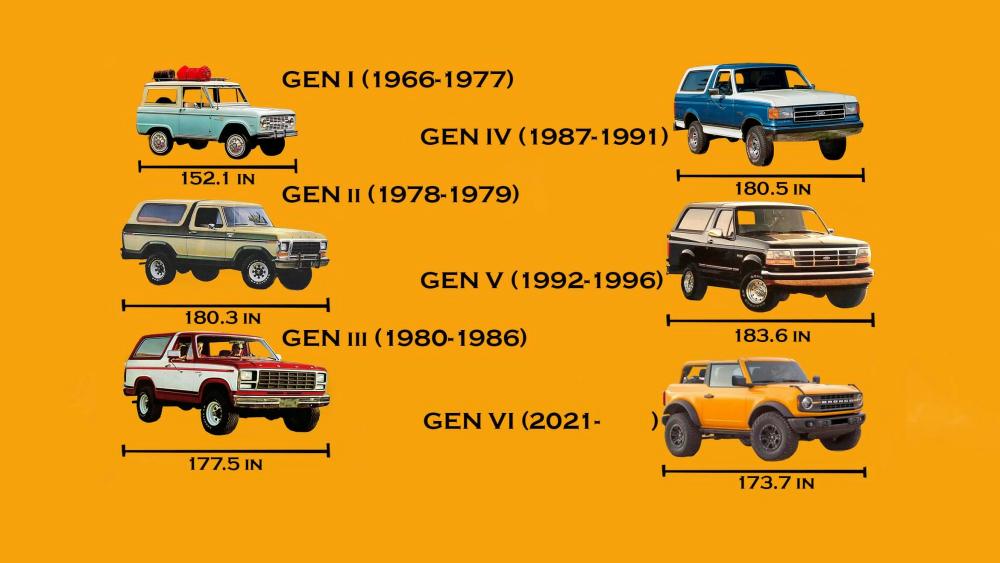 Just how big is the 2021 Ford Bronco compared to previous generations? Odds are you haven’t seen a first-gen model in a while, unless you have one in your garage, and you probably haven’t seen the 2021 model in real life either, because it was unveiled practically yesterday. And not even in public.

So how does the 2021 model compare to others, especially given the fact that the Bronco varied in size quite a bit in its first five generations?

For starters, let’s first acknowledge the fact that the first-gen model, which debuted in 1966, would be called a subcompact SUV today. With a length of 152.1 inches, it would be considered tiny even by the standards of the hatchbacks of today. For example, the last-gen Ford Focus hatchback had a length of 171.6 inches.

The first-gen Bronco was replaced by a full-size model for 1978 based on the F-Series trucks, after the Chevy Blazer and other competition went full-size in the early 1970s. Ford was arguably late to supersize its second-gen Bronco, which arrived as a placeholder of sorts for 1978 and 1979, just before Ford redesigned the third-gen model to be based on the next F-Series trucks. This short-lived second-gen Bronco grew in length to 180.3 inches, and would shrink just a bit for the 1980 redesign, which measured 177.5 inches from to back.

The Bronco grew back to 180.5 inches for the 1987 model year, as large SUVs came back into vogue along with larger engines, leaving the early 1980s period of Malaise behind. The Bronco grew yet again to its maximum size with the arrival of the fifth-gen model in 1992, growing in overall length to 183.6 inches.

The Bronco of the 1990s was effectively the apotheosis of the first five generations, both when it came to overall length and width, which was 79 inches. The 1992 Bronco also had a 104.7 inch wheelbase. 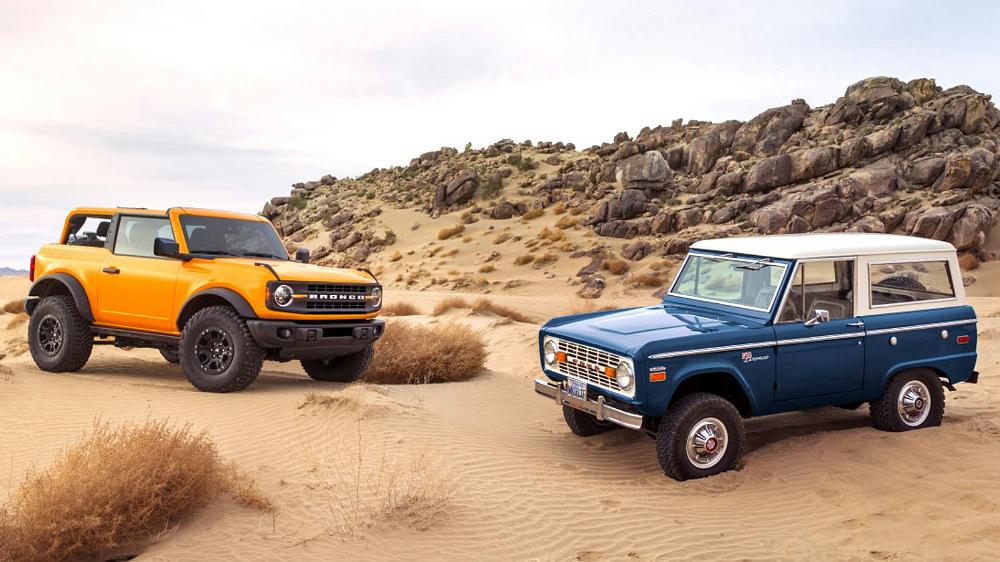 By comparison, the two-door 2021 Bronco has an overall length of 173.7 inches and a 100.4-inch wheelbase. This makes the new two-door Bronco shorter than almost all the others… except for the first-gen model, which measured 152.1 inches end to end. The first-gen model was also incredibly narrow by today’s standards, measuring 68.8 inches in width. It would be narrow even by the standards of the Ford Focus hatch, which had a width of 71.8 inches.

What about the new four-door Bronco?

That one is actually longer than any other Bronco with an overall length of 189.4 inches. The new four-door is also pretty wide, even though one has to pay attention to its six trims when comparing such things. The widest version of the new 2021 Bronco — the Wildtrack — is wider than the 1992 model, which was 79.1 inches wide.

The takeaways? In two-door form the new Bronco can seem pretty modest in overall length compared to the full-size models of the 1980s and the 1990s. It’s larger than the first-gen model… but then a lot of vehicles are, but you really have to look at the four-door to end up something that’s just about the size of the biggest Bronco of the past, which was the 1992 model. Just be thankful it will have much better fuel economy than the 1992 model.