Back In The Saddle – Ford Bronco R 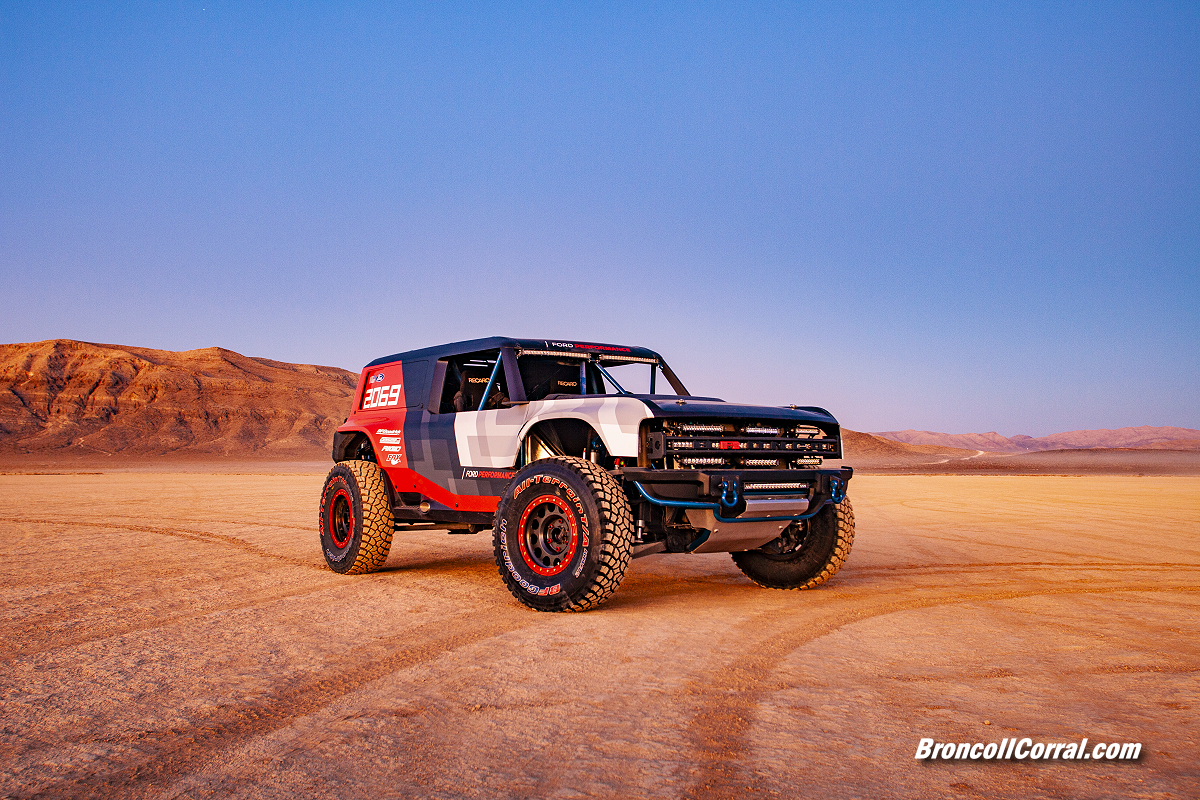 It was built for this, its engine roaring through the heat of the Mojave and its racing tires spraying desert sand. As the last grain settled, the vehicle that is all at once a tribute and a test and a tease, came in to focus. It was no mirage. Bronco – in the form of a race-inspired Bronco R prototype – is back.

As a tribute, it was appropriately parked alongside the Bronco that Rod Hall and Larry Minor famously drove to an overall win 50 years ago at the 1969 Baja 1000 – a victory that no other 4×4 has replicated. Featuring a race livery inspired by Hall’s winning vehicle, Bronco R passes the torch to off-road racer Shelby Hall, Rod’s granddaughter, who will drive it for portions of this year’s prestigious race in honor of her late grandfather.

As a test, the Bronco R will head back to the Baja Peninsula later this month to take on the near 1,000-mile grueling off-road course and challenge the production Bronco’s powertrain and architecture.

And as a tease, the Bronco R – developed by Ford Performance in collaboration with builder Geiser Bros Design and Development and Baja 1000 Trophy Truck champion Cameron Steele – drops heritage-inspired design and proportion hints of what enthusiasts can expect to see when the future Bronco makes its world premiere next spring.

“Bronco’s win at Baja in 1969 was epic, something that even after 50 years has not been repeated,” said Hau Thai-Tang, Ford chief product development and purchasing officer. “Rugged endurance racing is such a big part of Bronco heritage. The Baja 1000 gives us not only the perfect setting to honor Rod Hall’s win, it also provides an authentic test bed to demonstrate our upcoming Bronco’s desert racing capability and durability.”

Hidden behind an innocuous security door in a Ford studio basement, a small team led by Paul Wraith, Bronco chief designer, worked since July to make the race prototype unmistakably Bronco at first sight. The team worked in secret to create a one-off build that hints at the all-new Bronco to come, while paying homage to the first-generation Bronco’s styling and proportions that made the nameplate an instant off-road icon a half-century ago.

The team focused on creating a race-ready look with an overall heritage-inspired design language. With its compressed body height and long-travel suspension, Bronco R features an ultra-wide stance, while a variety of aero components reinforce its performance intent. The prototype’s lightweight composite body includes a clamshell hood and roof, as well as clean body panels that harken back to the first-generation Bronco models (1966 – 1977). A cut-roof design allows rear seat passengers to use a second-row hatch for access.

The exterior incorporates 15 LED lightbars from Rigid, including a grille sequence framing the new BRONCO brand lettering boldly. To underscore that this is a one-of-a-kind racing prototype, the “R” is given a sharp graphic treatment. Washers inscribed with the Bronco name are visible at various points around the exterior and secure the composite skin to the roll cage beneath it.

A unique race-focused interior features lightweight off-road racing shells from Recaro for all three seating positions. Simple surfaces of the instrument panel nod to the first-generation Bronco, and the integration of a MoTeC data acquisition system enables real-time monitoring and measurement of the prototype’s performance attributes.

With its exterior inspired by the winning 1969 Baja 1000 Bronco livery, the Ford Performance Bronco R race prototype pays tribute with its red, white and black colors accented by its blue space frame. No. “2069” stretches across its rear quarter-panel and wing – “20” to signal the class in which it will race and “69” in honor of the year in which Hall and Minor roared to an overall victory in the Mexican 1000 (now SCORE-International Baja 1000).

“My grandfather was so proud of the 1969 Baja race and of his Bronco,” said Shelby Hall. “More than just the memory of winning Baja, he loved that Bronco. I have no doubt he would be blown away by the Bronco R race prototype.”

“This wasn’t our usual development process, but it was the right process for this project,” said Wraith. “We found, created or adapted the right tool for the task at hand – a cool and exciting blend of old and new creative techniques. We stretched ourselves, but it was worth it – and great fun.”

More than a celebration of Hall’s 1969 win, the Bronco R race prototype is designed with the production model’s body-on-frame architecture to test its capability and durability, while also energizing off-road enthusiasts who eagerly await the return of America’s original sport utility vehicle.

The race prototype is built on a modified Ford T6 architecture that will provide the base for the production model. Beefed up for Baja, Bronco R features an independent front suspension with 14 inches of travel and a production-based five-link rear chassis design with up to 18 inches of travel, plus custom Fox shocks, 17-inch beadlock-capable aluminum wheels and 37-inch BFGoodrich tires.

“Like the original Bronco, we kept Bronco R’s design authentic and simple, with a roll cage on a production-style frame, and a five-piece lightweight body on top,” said Brian Novak, Ford Performance off-road racing supervisor. “For the endurance needs of Baja’s 1,000 grueling miles, we built in a limited number of race-focused parts. But even the twin turbos of the EcoBoost® engine are representative of what the production Bronco will offer.” 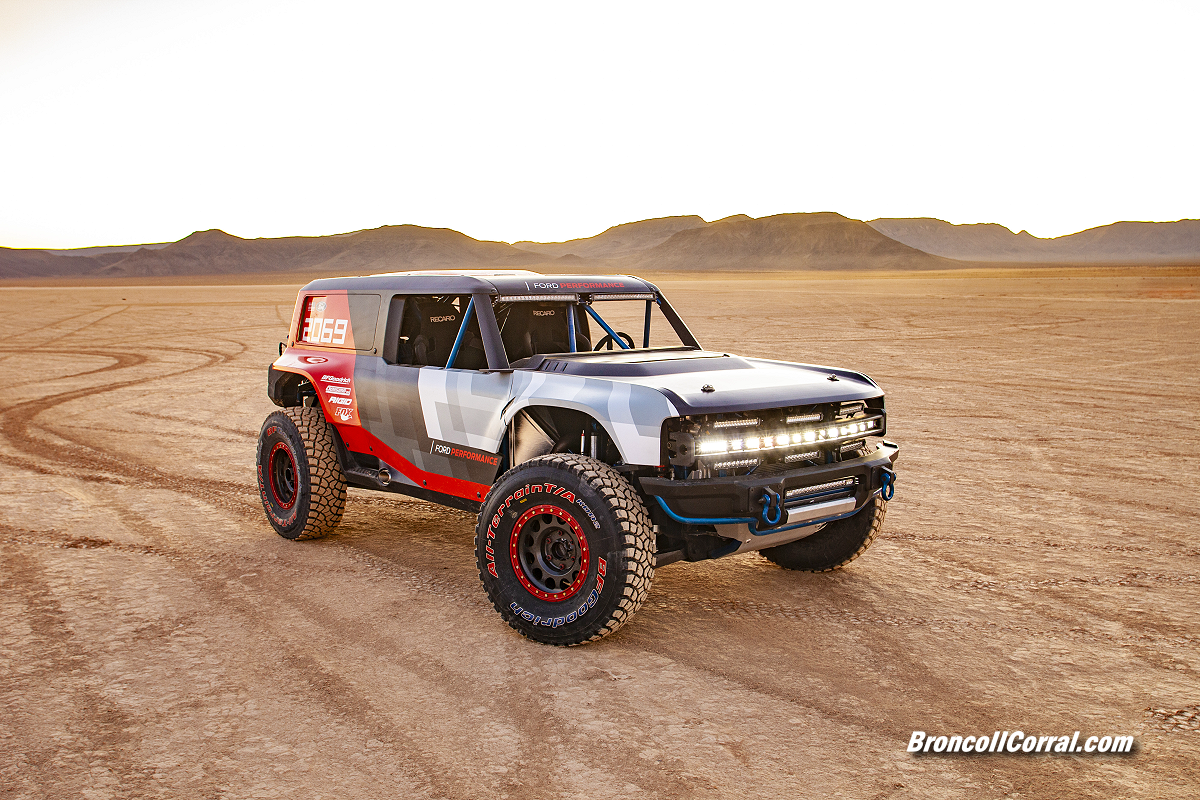 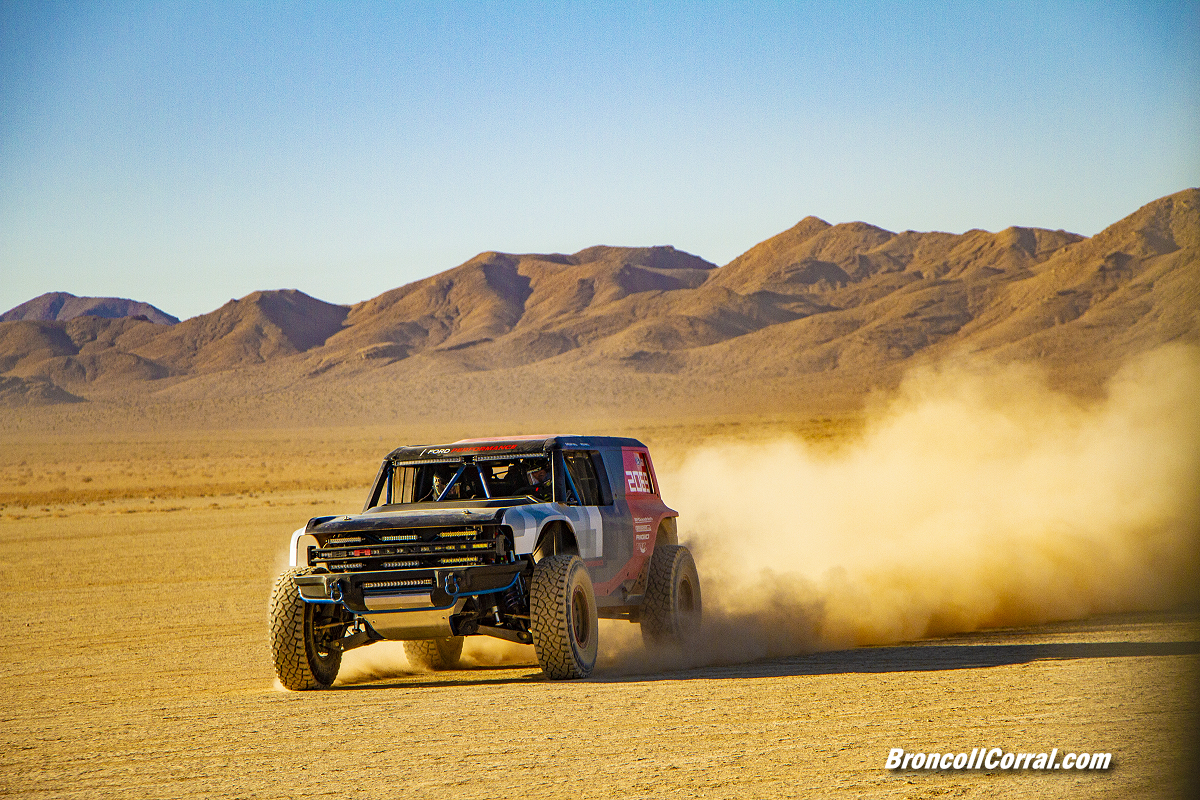 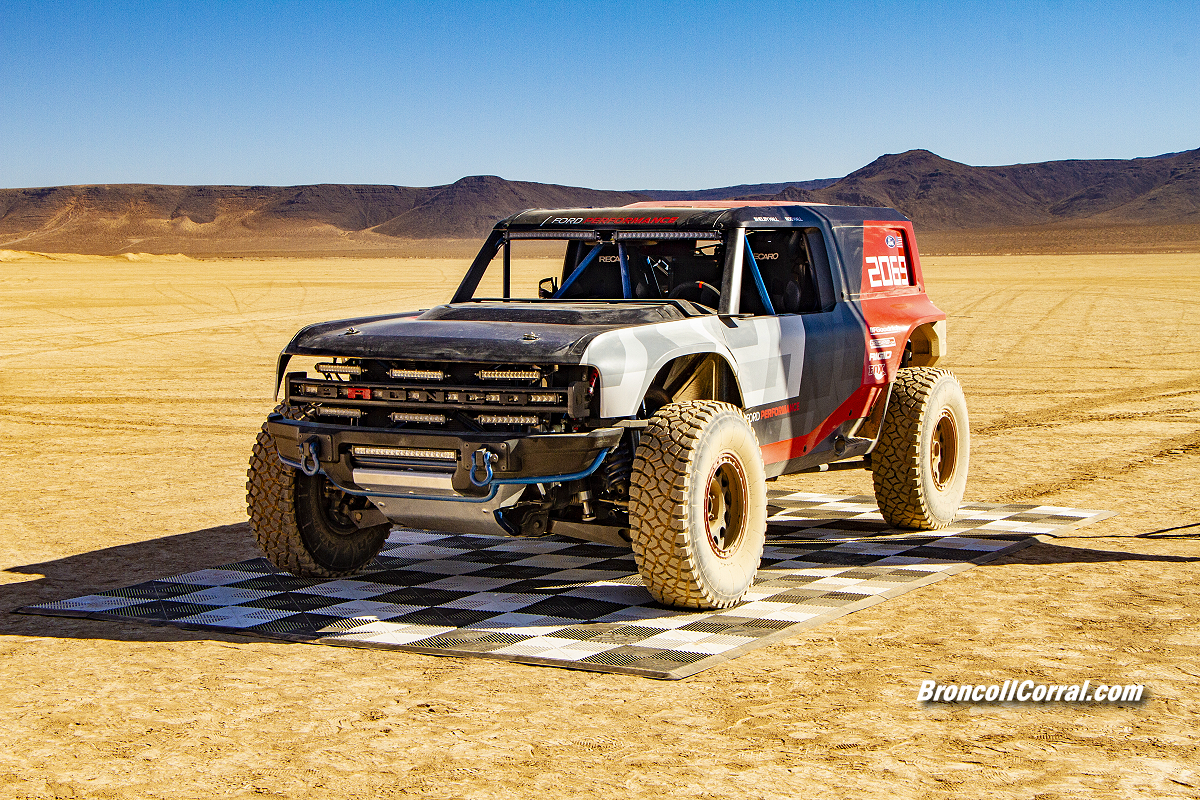 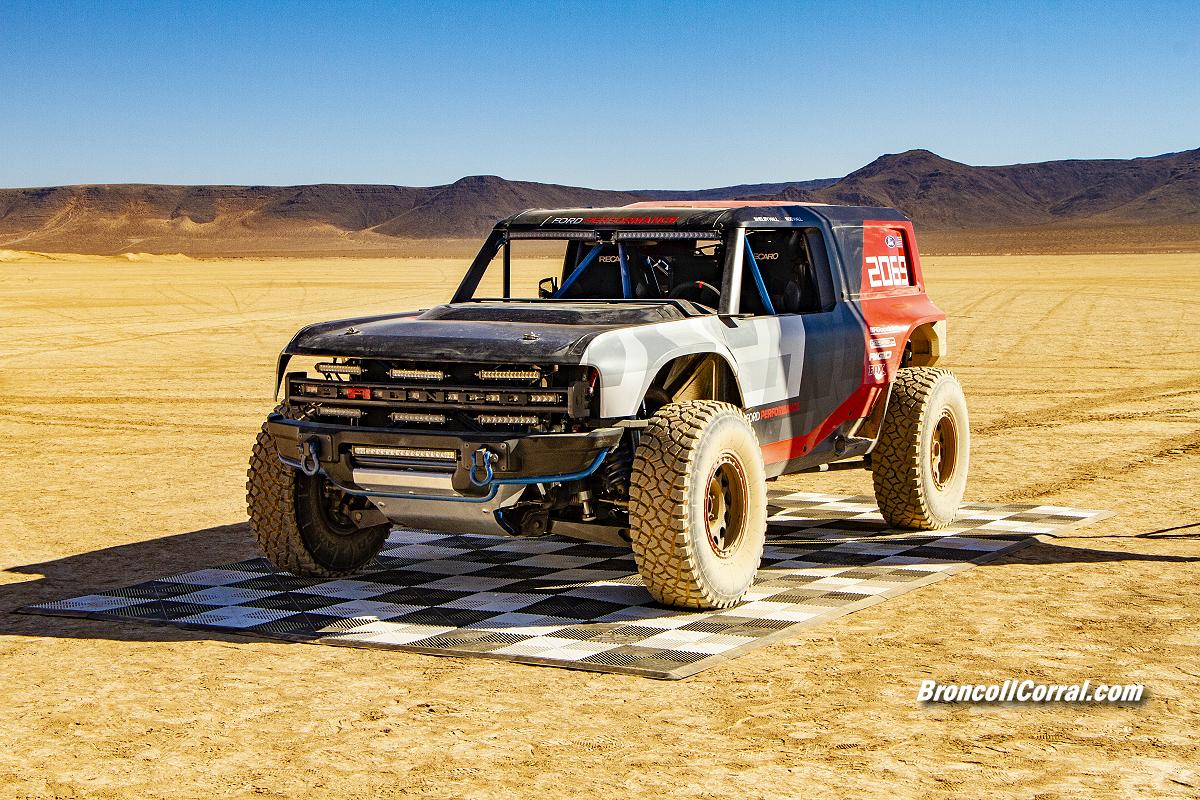 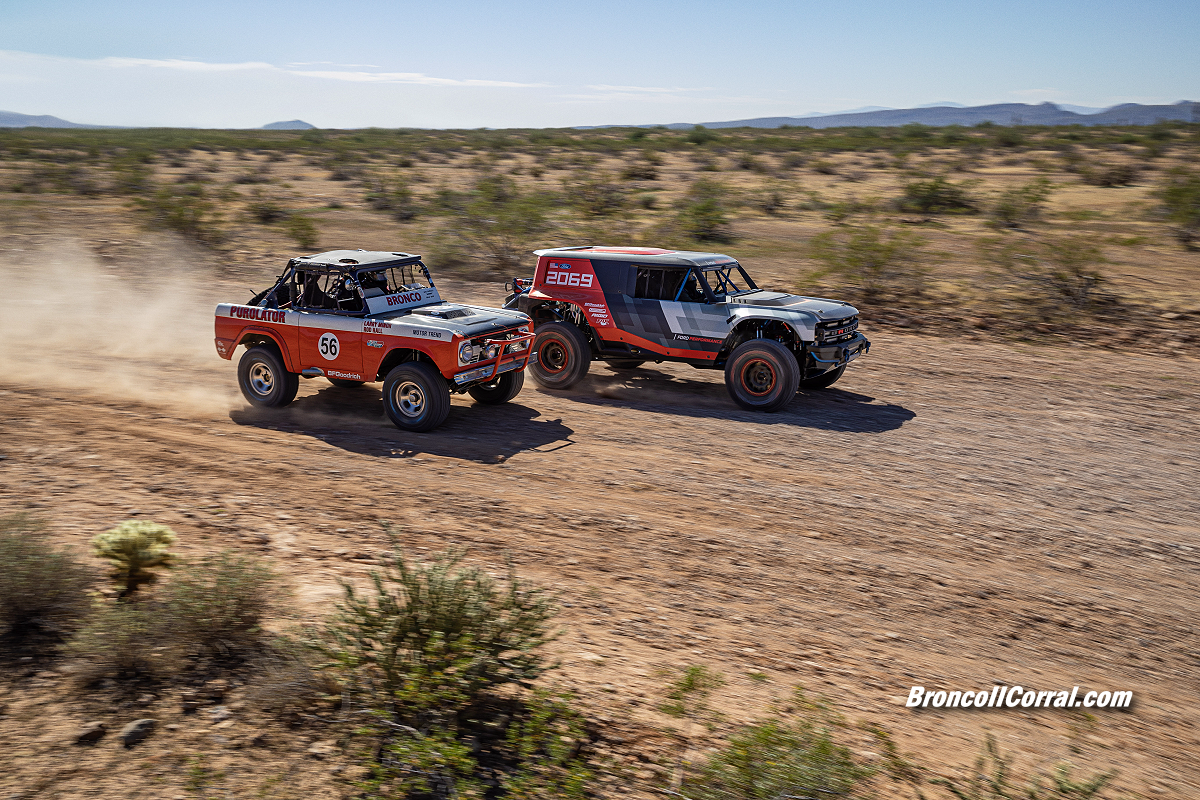 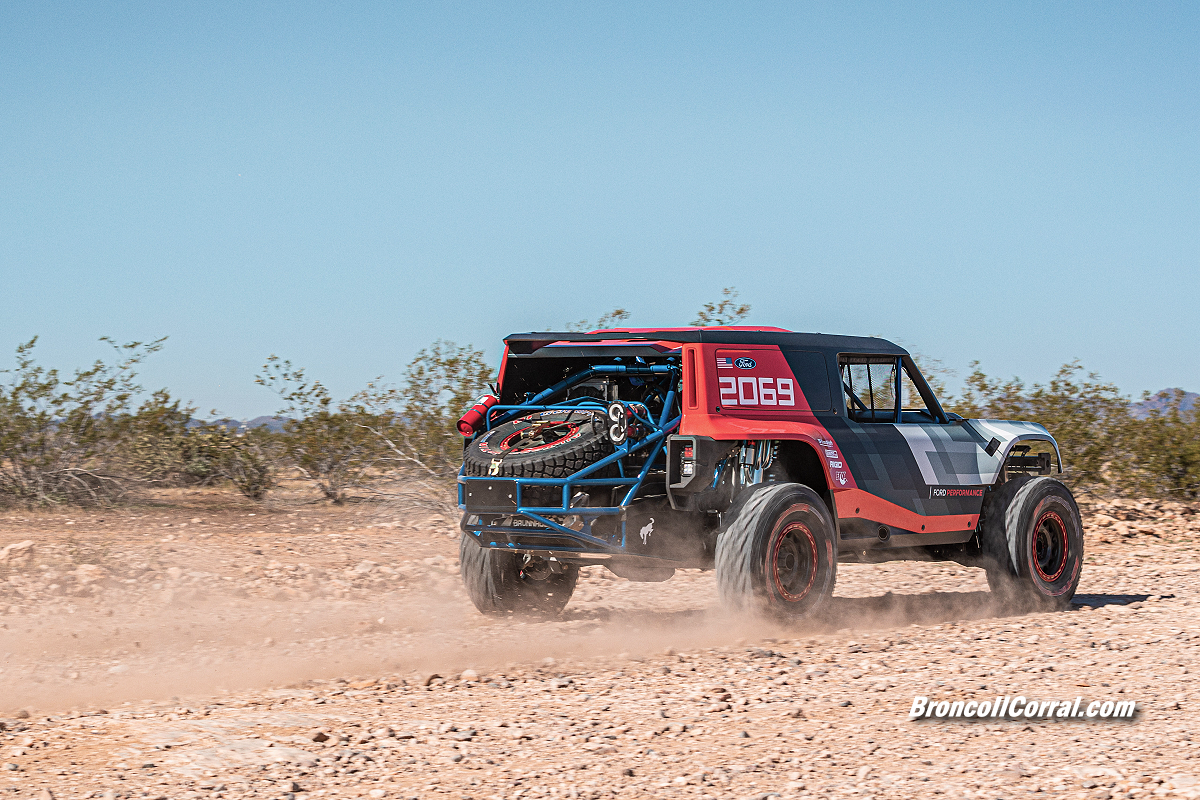 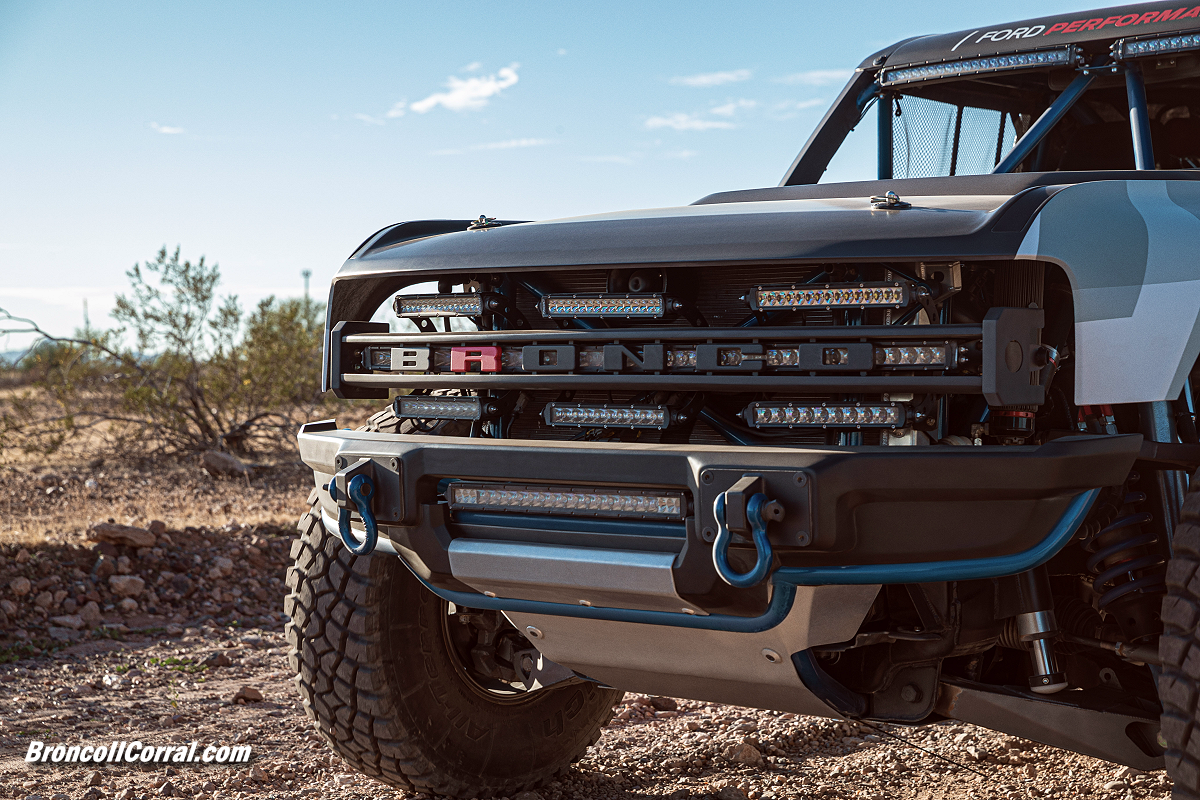 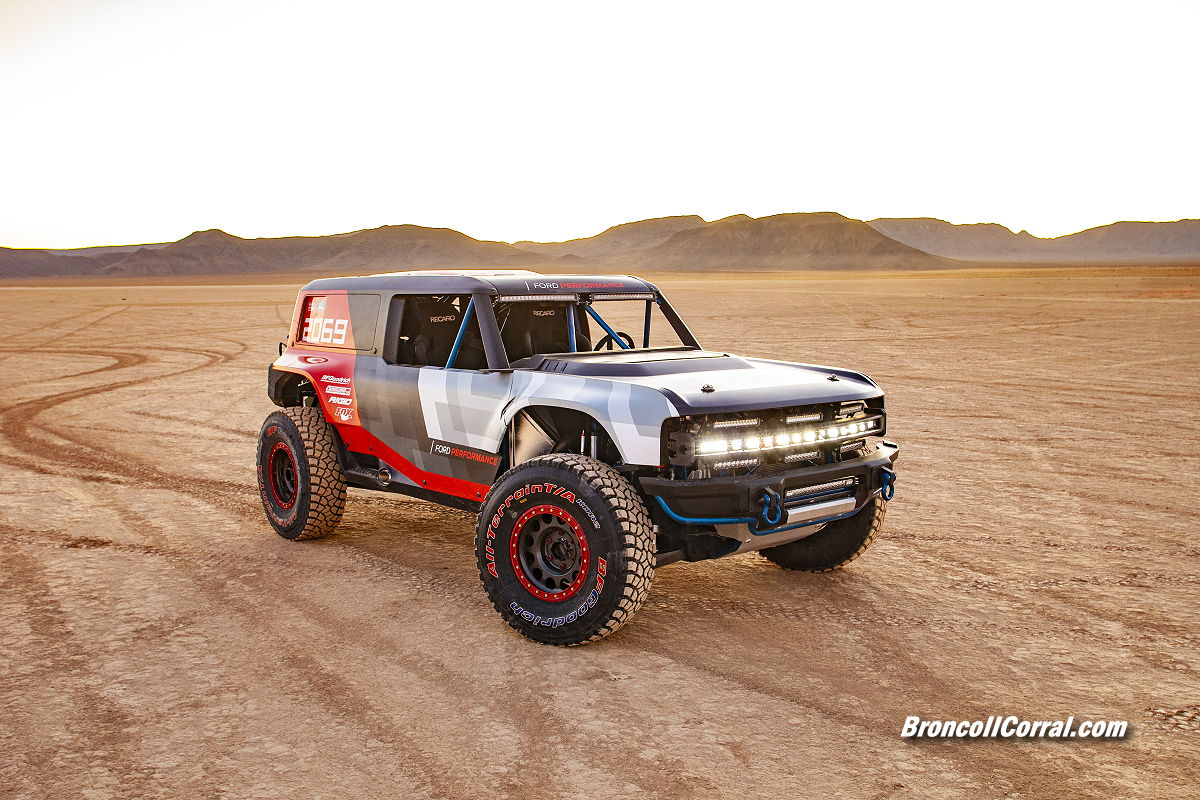 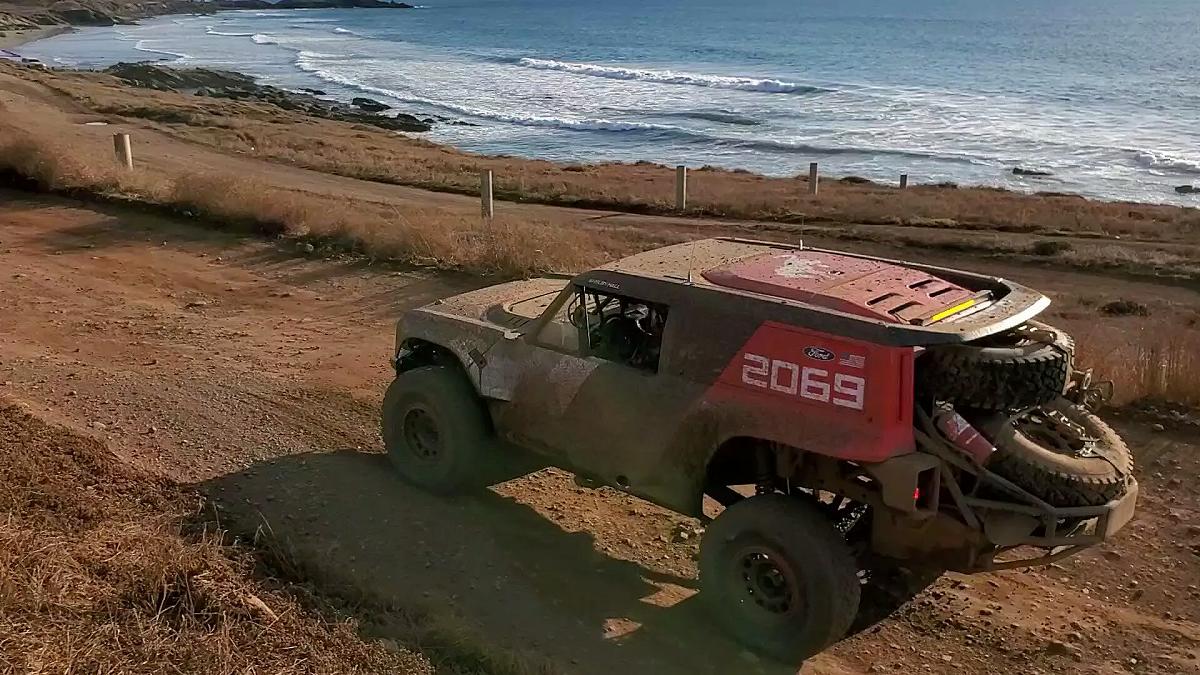 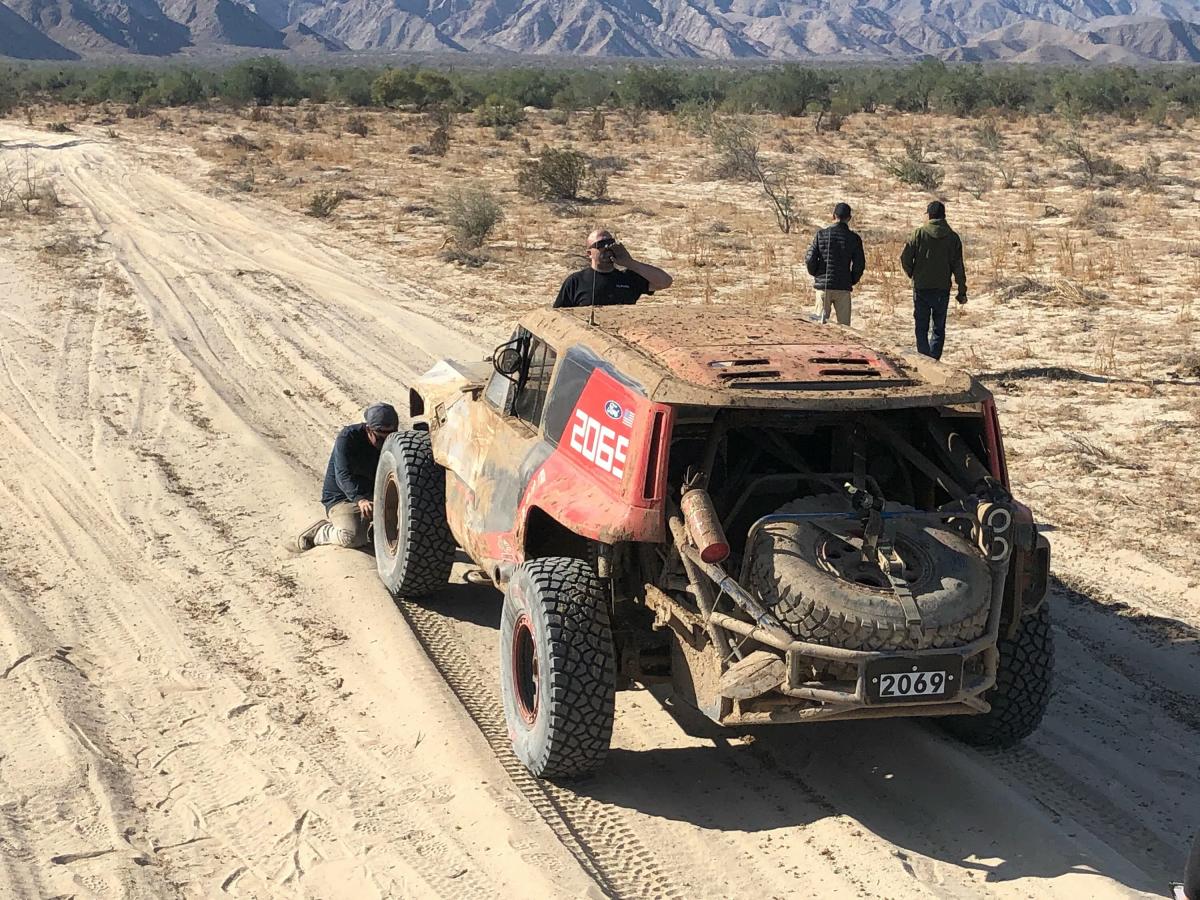