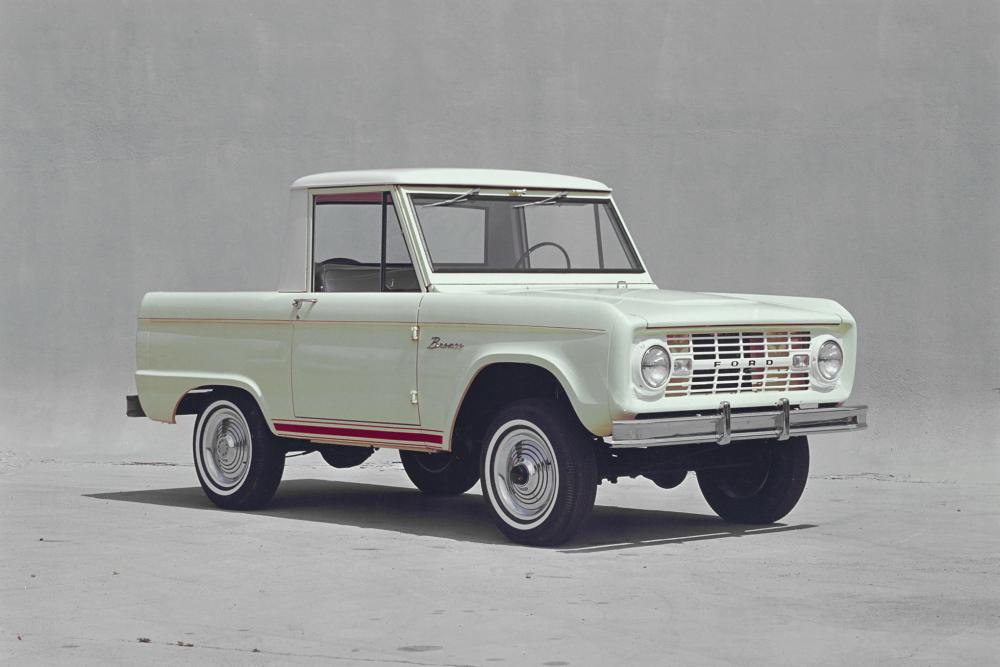 Golden anniversaries are special. Unlike a 50th birthday, which is congratulatory celebration making it to a certain point after a born-on-date, a golden anniversary evokes a much deeper and reflective look at the most memorable highlights of the journey to reach such a benchmark. The Bronco’s golden anniversary this year certainly garners that respect.

Like a couple celebrating their golden wedding anniversary, off-roaders who have one (or more) Broncos in their stable have a true passion for this unique 4×4. Brought to market in August 1965 as a 1966 model to compete against the Jeep CJ-5s and International Scout 800s of the time, Ford advertised it quite simply: Bronco All-Purpose-Vehicle.

Ford’s new offering was love at first sight for those seeking a more civilized, smoother riding, more powerful, two-door alternative to the CJ-5s and International Harvesters of the day. Ford sold more than 35,000 Broncos during the first two years. 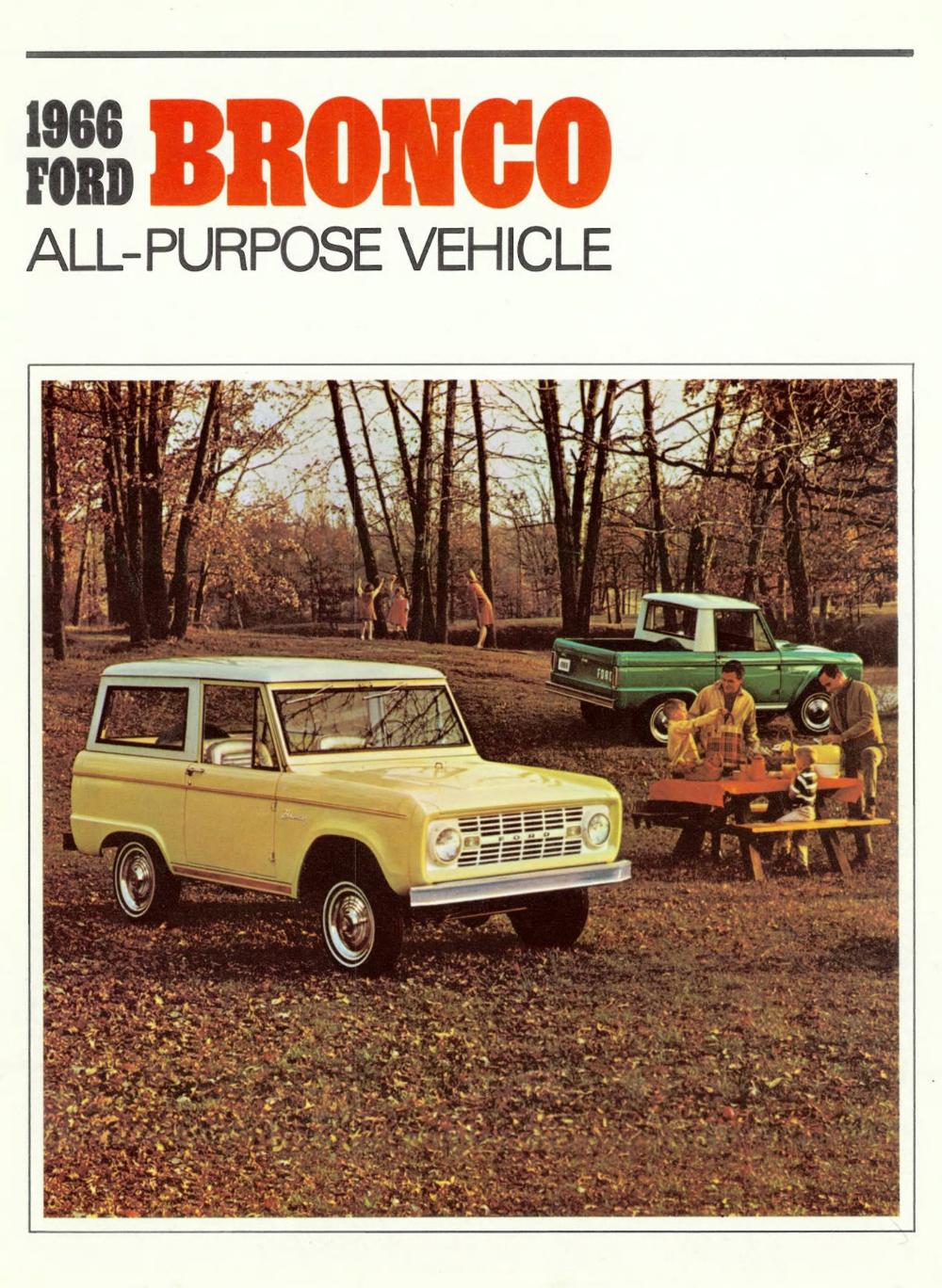 Ford touted the compact 4×4’s maneuverability, ride, comfort, and outdoor appeal, but it was the push in the off-road racing circles that really heated up the romance with the “little” Bronco – a romance that still remains strong today. The most popular model was the wagon, followed by the half-cab with its short bed, and a rag-top roadster. Although the basic models came with a 170cid straight-six and three-speed, it was the optional 289-cid V-8 (and a long list of other accessories) that excited the off-road enthusiasts and four-wheeling crowd.

The popularity of the Bronco kick-started the advent of the sport-utility vehicle (SUV). By the early ‘70s SUVs such as the Chevy Blazer, International Scout II, and Jeep Cherokee were all trying to get their piece of a new, fast growing automotive niche. 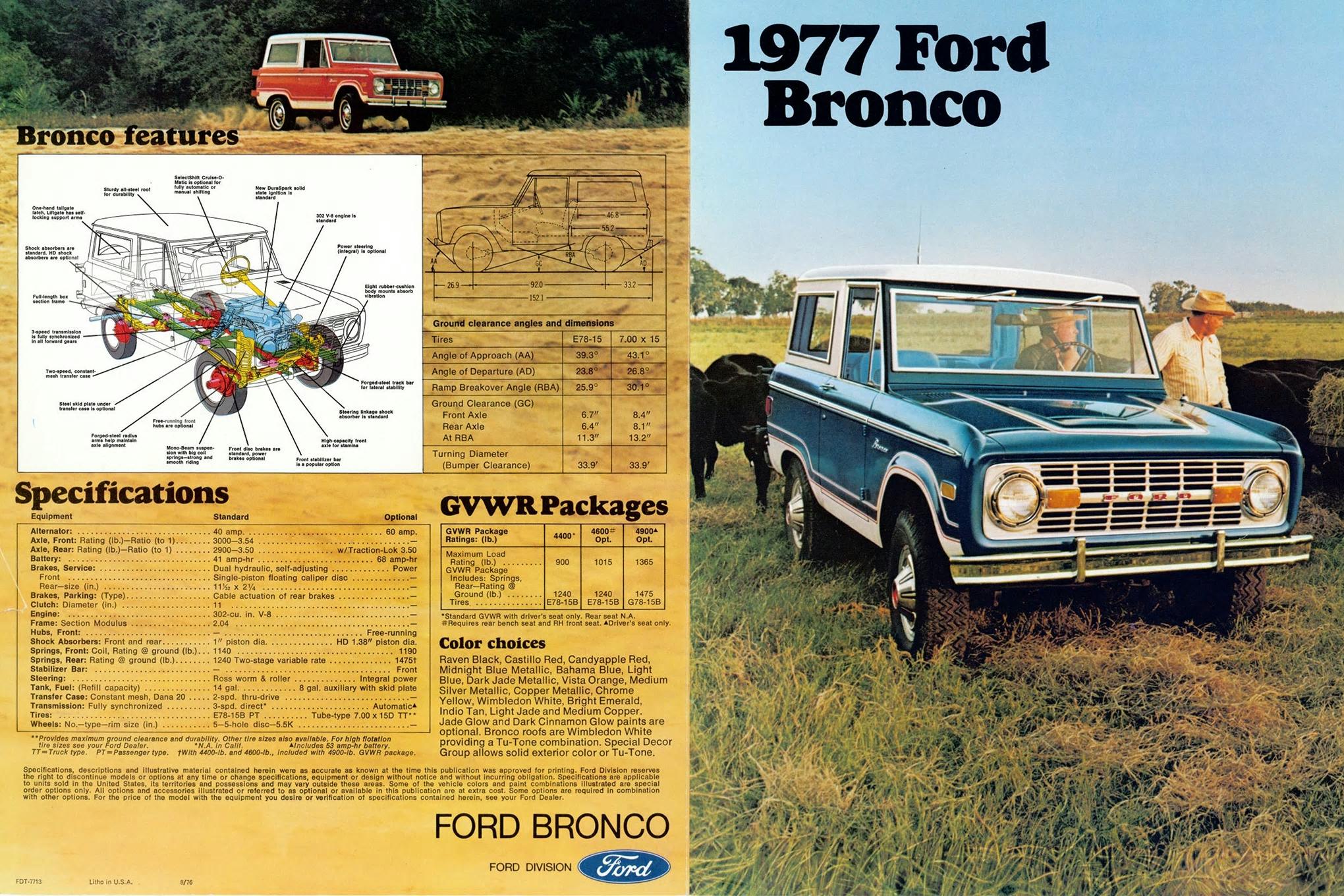 1977 was the last year of the “bobtail” Bronco. It was offered in (18) different colors, with either a 3-speed manual or 3-speed automatic behind the 302 V-8. It was the classic Bronco’s best sales year. 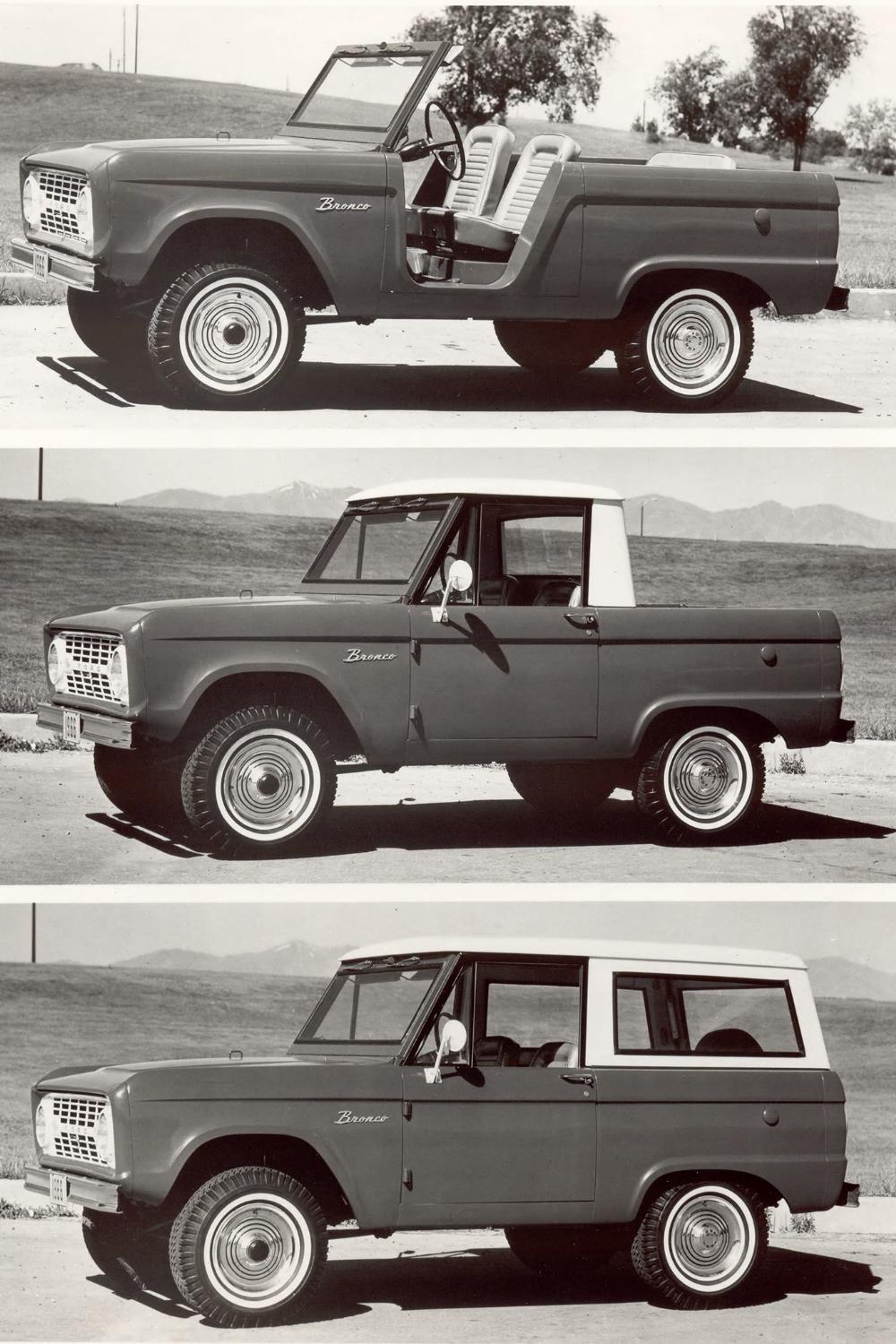 Ford offered the Bronco in three basic styles when it debuted in 1966:

The convertible was dropped in 1968, the half-cab four years later. 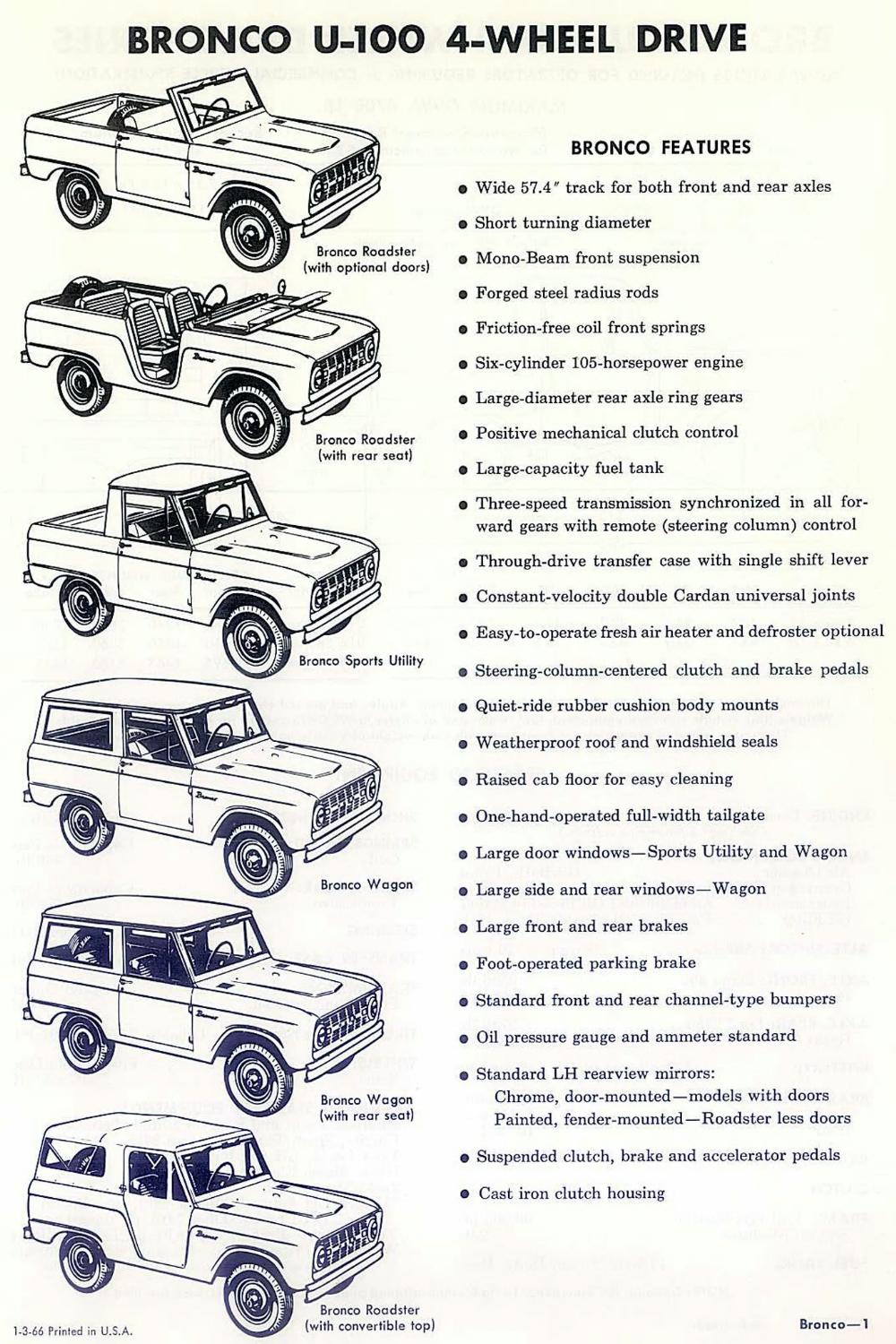 This page from the 1966 Ford Bronco specs shows the variations offered and a list of standard features available for the new four-wheel-drive. 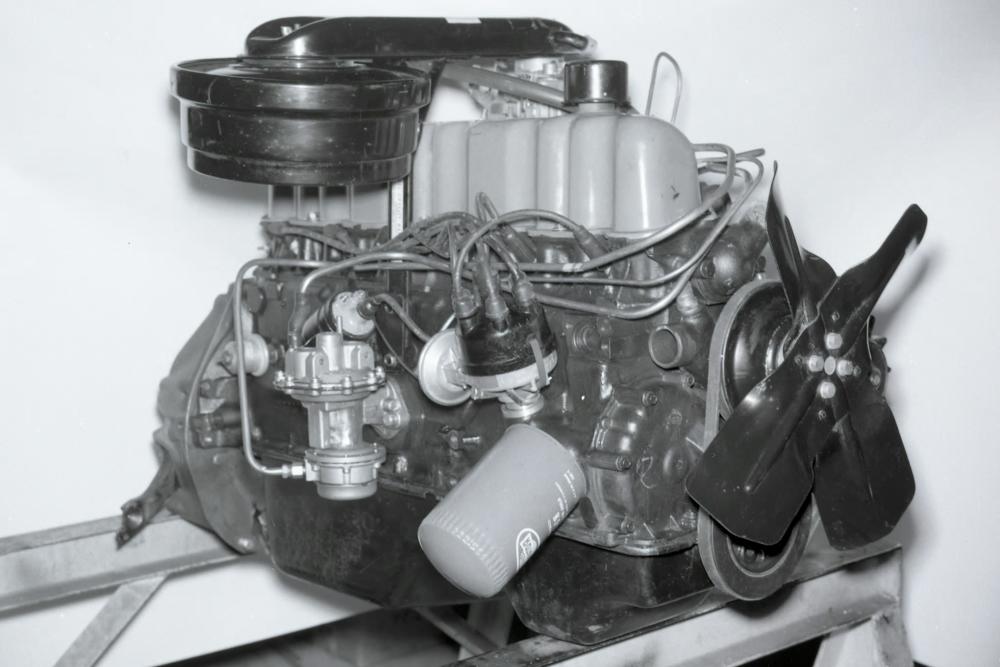 The base 105 hp 170 cid straight-six wasn’t a powerhouse by today’s standards, but it was reliable and fuel efficient back in the day. The option was the 289 cid V8 that powered Ford’s Mustangs and Fairlanes. 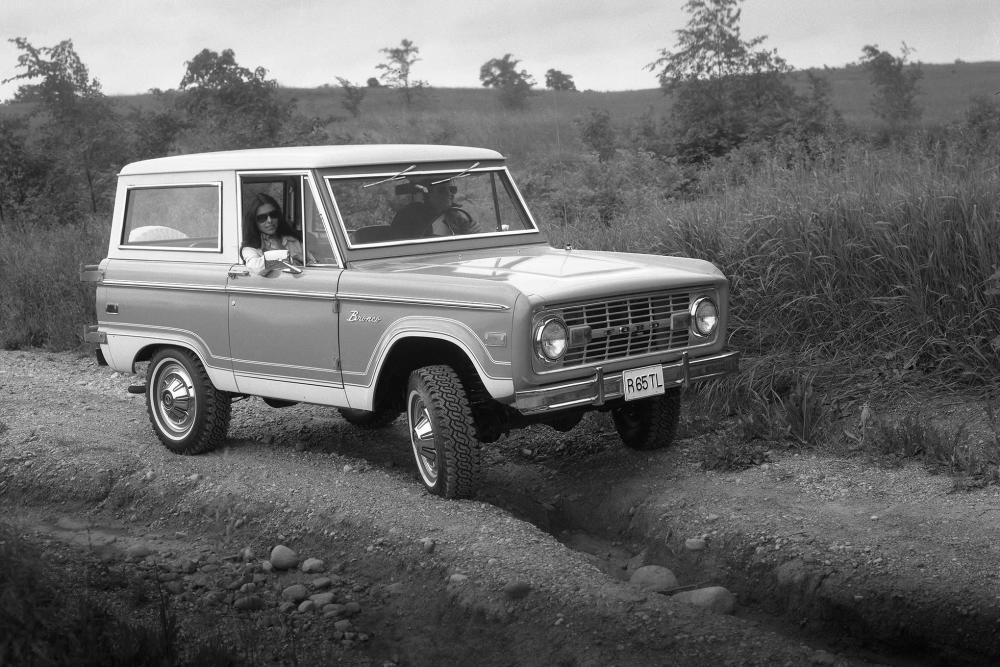 By 1977 Ford had upgraded the Bronco with power steering and automatic, and the six-cylinders were long gone leaving the 302 Windsor as the only engine choice. 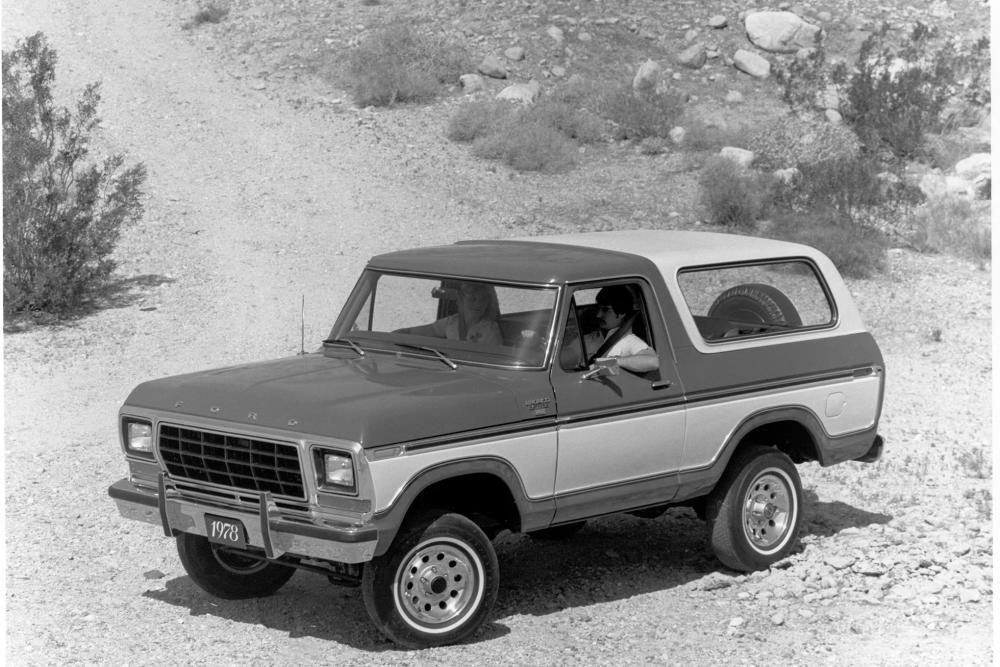 The big change. In 1978 Ford switched gears and built the Bronco on the F-150 platform, increasing wheelbase to 106 inches. It was the start of an entirely different era for the Bronco. More room, more options, more comfort. 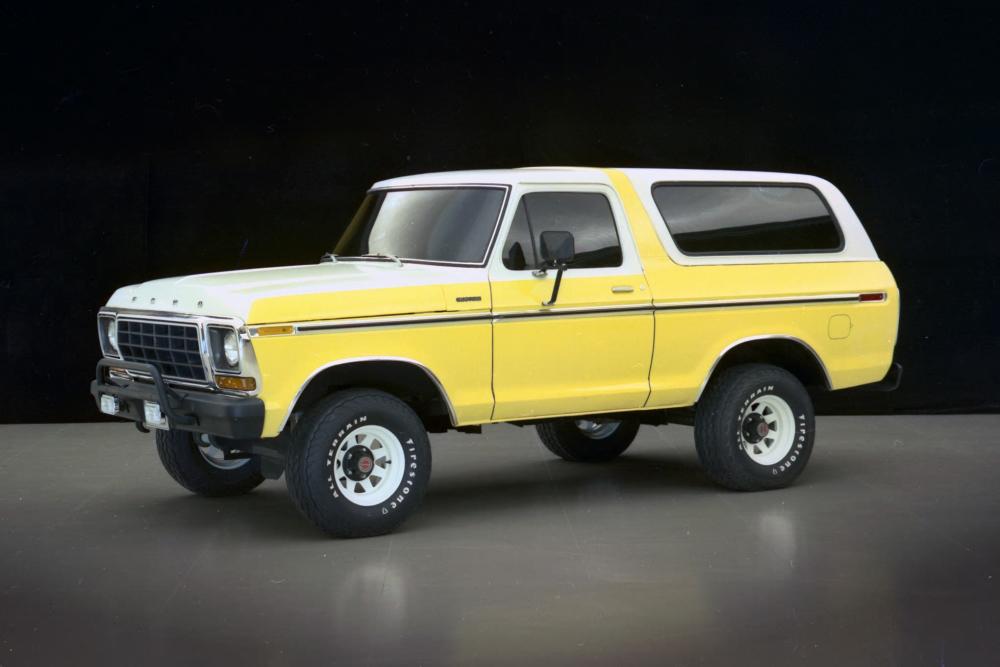 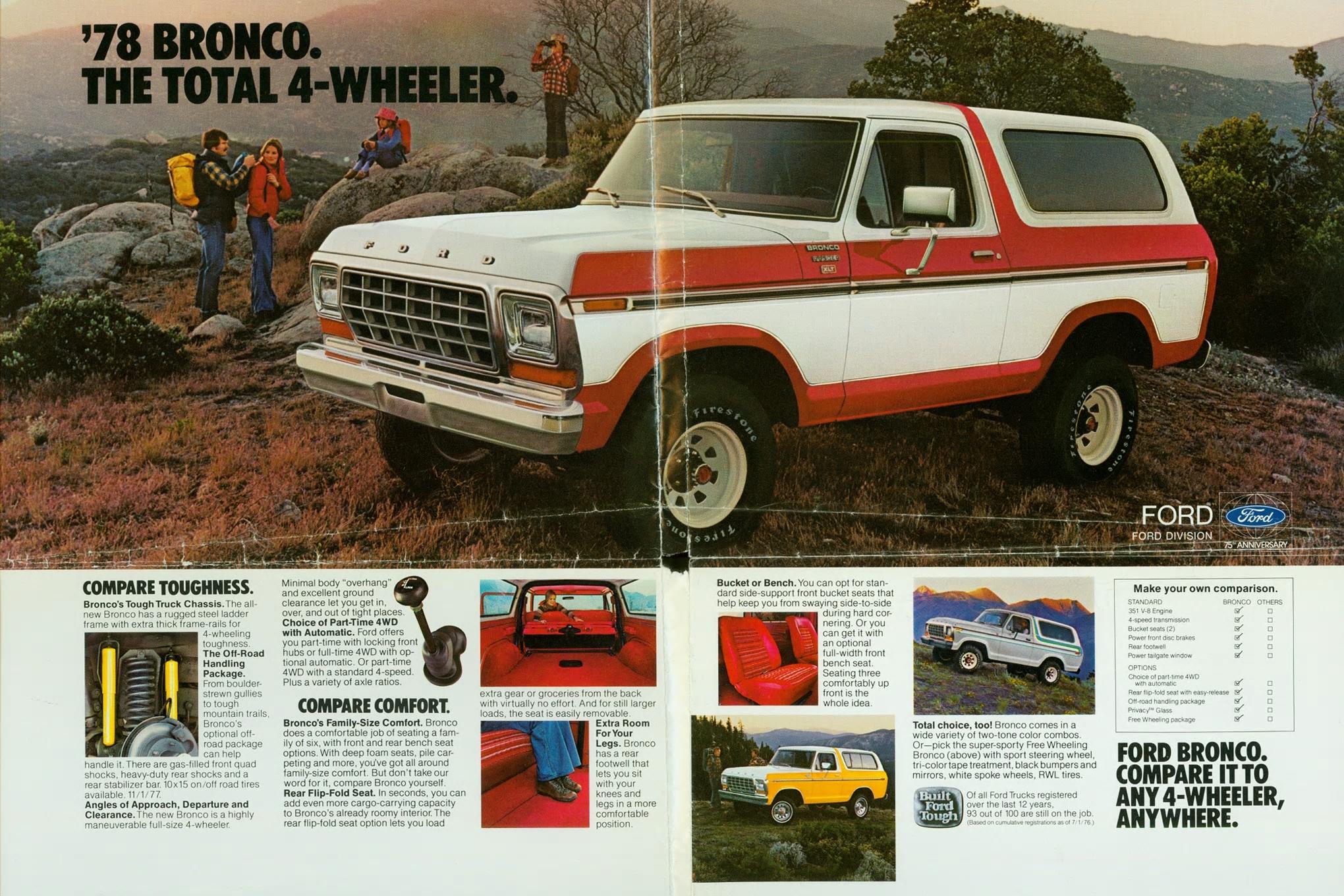 Ford advertised the new generation Bronco with heavy emphasis on its off-road, backcountry abilities, 351 V8 and off-road options that no other full-size SUV was offering at the time. 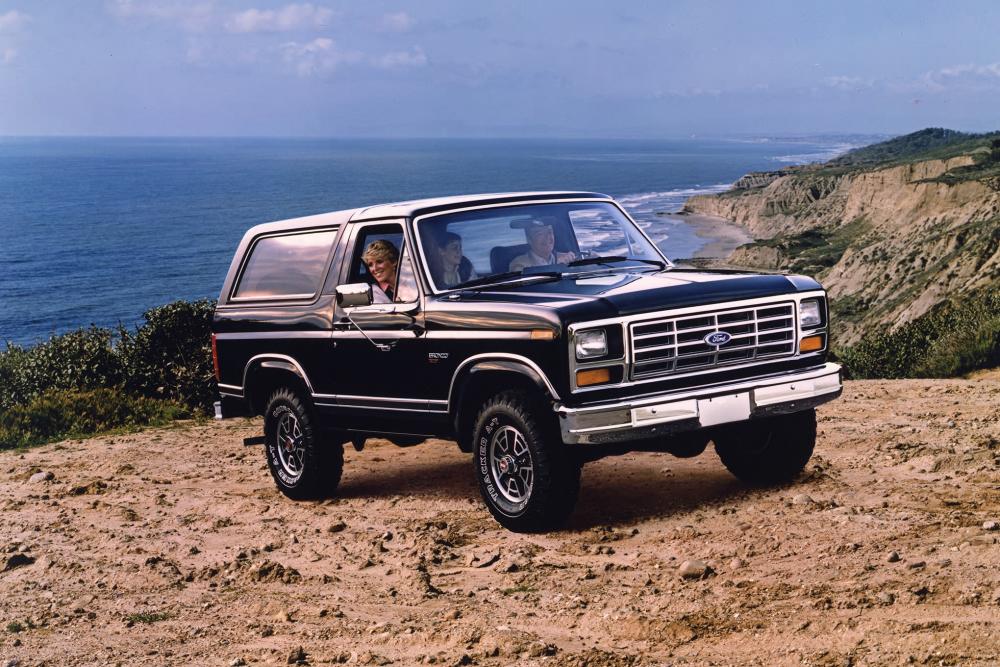 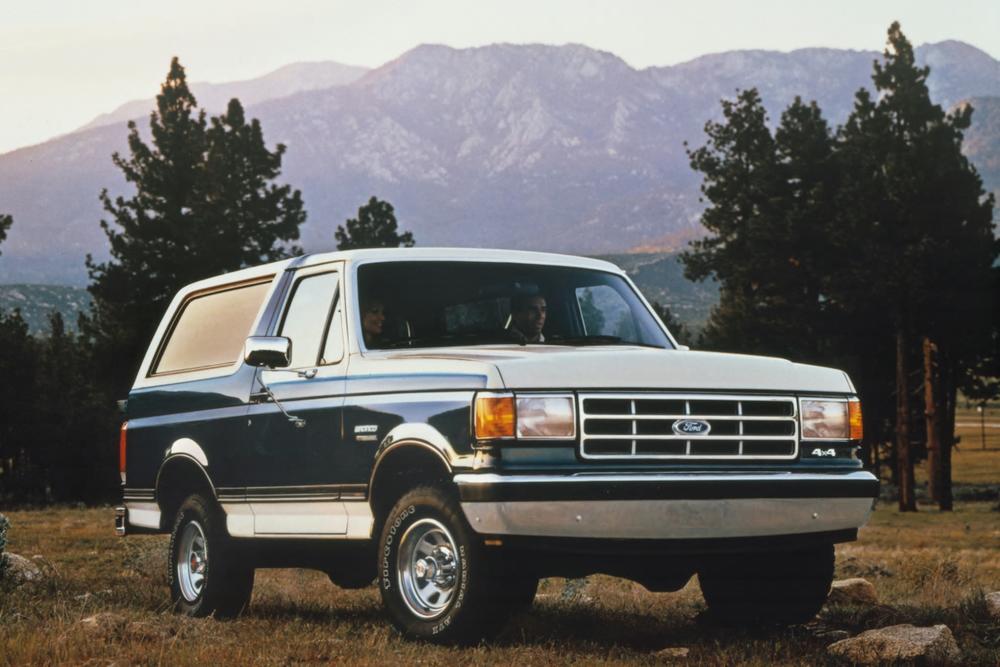 When the 4th Generation came out in 1987, Ford beefed up the rear differential with a nine-inch, brought in EFI, and added a four-speed-auto with overdrive, along with implementing a growing number of safety and emissions components. 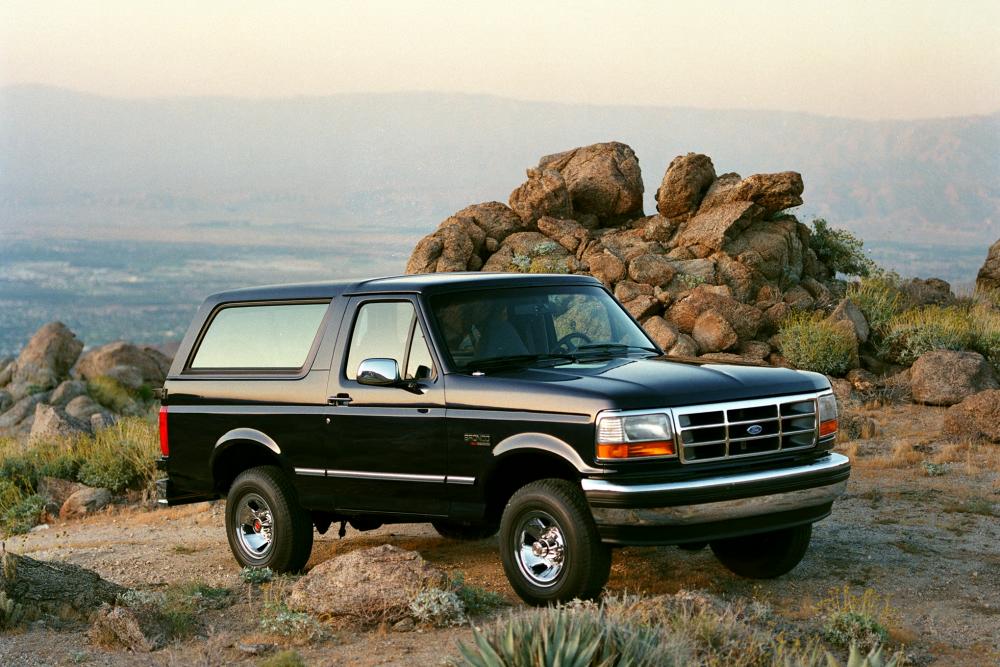 The last generation of Broncos were built between 1992 and 1996 when Ford put the name and truck out to pasture, ushering in the Expedition as the replacement. It was a good 30 year run that saw a lot of variety and changes in a vehicle marketed under the same name.

Off To The Races 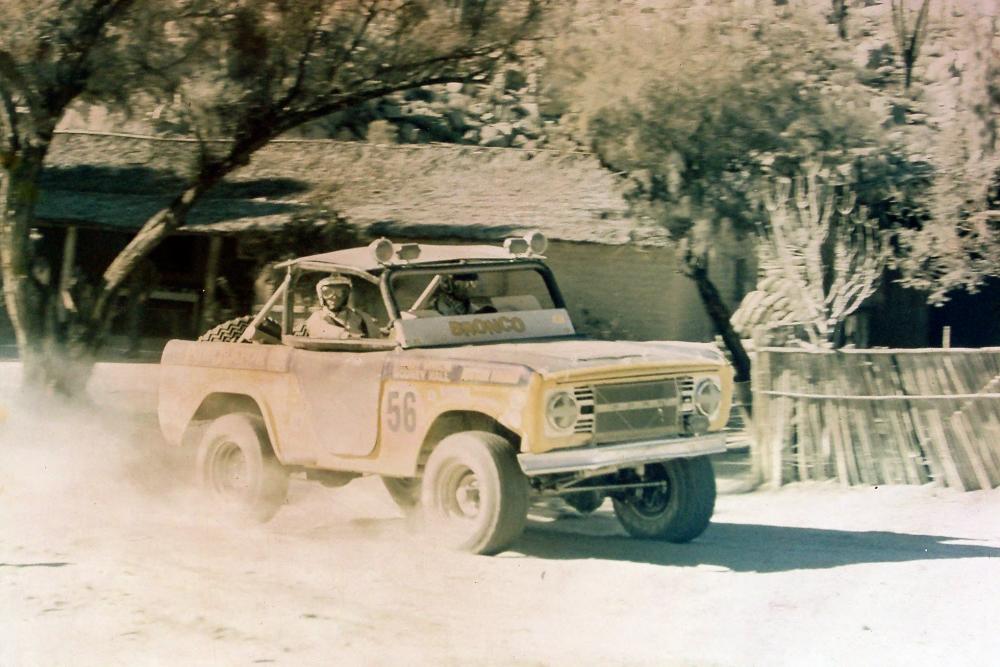 Future Off-road Hall of Famers Rod Hall and Larry Minor on their way to a first overall in the 1969 Mexican (Baja) 1000 driving in a Stroppe-built Bronco in the production 4×4 class.

But it was the off-road racing scene that really put the spotlight on the early Bronco. The Ford-backed Holman-Moody-Stroppe (HMR) racing team started winning races with the bobtails in 1965, even before some dealers had them on the lot.

Stroppe’s early race-winning Bronco was powered by a 200cid straight-six topped with a supercharger designed for the Cobra 289. It made 315hp and sounded like “the high-pitched whine of a bumblebee in flight” according to a 1968 Ford press release. By 1969 however, the team’s entries were running V-8s.

The publicity garnered from winning the longest and most prestigious off-road events of the time (Mint 400, Baja 500, Mexican 1000/Baja1000) with legendary drivers like Larry Minor, Rod Hall, Parnelli Jones and Bill Stroppe leading the charge, cemented the Bronco name in automotive history books.

That early racing glory also lead to Stroppe offering a very limited-production, special-edition “Baja Bronco” through Ford dealers from 1971-’75. The Broncos came right from the Ford plant to Stroppe’s Southern California shop where they were customized with double shocks at all four corners, fender flares, roll cage, heavy duty suspension, swing-away tire carrier, auxiliary fuel tank, extra cooling, and off-road tires on wide wheels.
Stroppe’s Baja Broncos were also available with a C-4 automatic and power steering, which Ford didn’t offer until 1973, along with the option of competition racing harnesses, high-performance 302 and a Detroit locker in the rear. Today Baja Broncos are rare and very coveted by Ford Bronco aficionados. 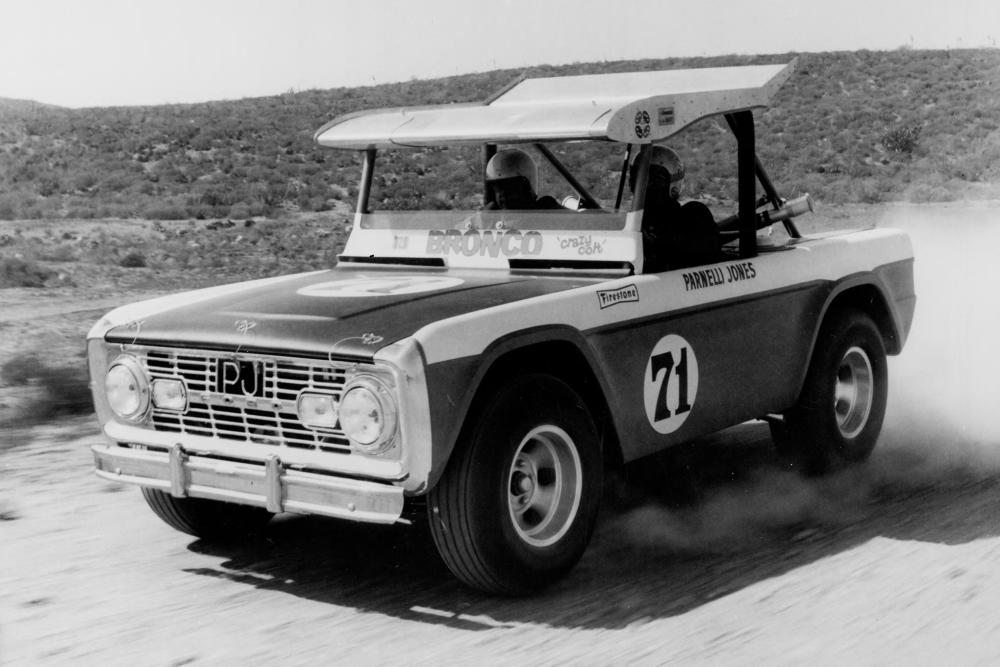 Bill Stroppe and Parnelli Jones at speed during the 1970 Mexican (Baja )1000. The Holman-Moody-Stroppe racing team of Broncos were hard to beat in the desert in the late ‘60s, early ‘70s. 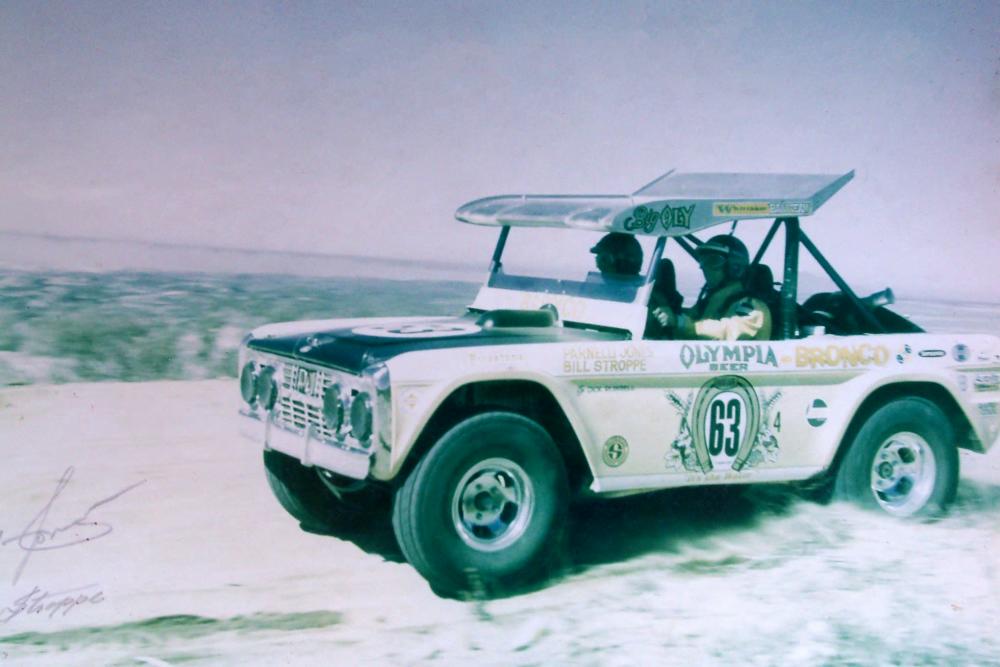 “Big Oly,” a 1970 model, was the most recognizable of all the racing Broncos. Parnelli Jones and Bill Stroppe won the Mexican (Baja) 1000 in record time that year and went on to set numerous other desert racing records piloting the fiberglass-bodied, 400hp, tube-chassis 2wd racer that was originally called “Crazy Colt.” 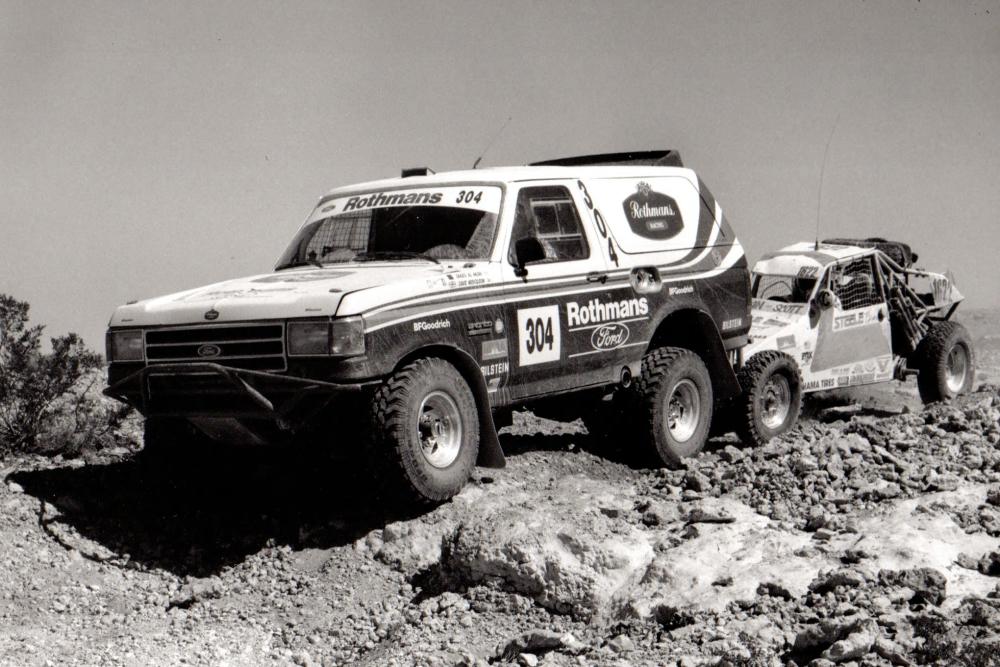 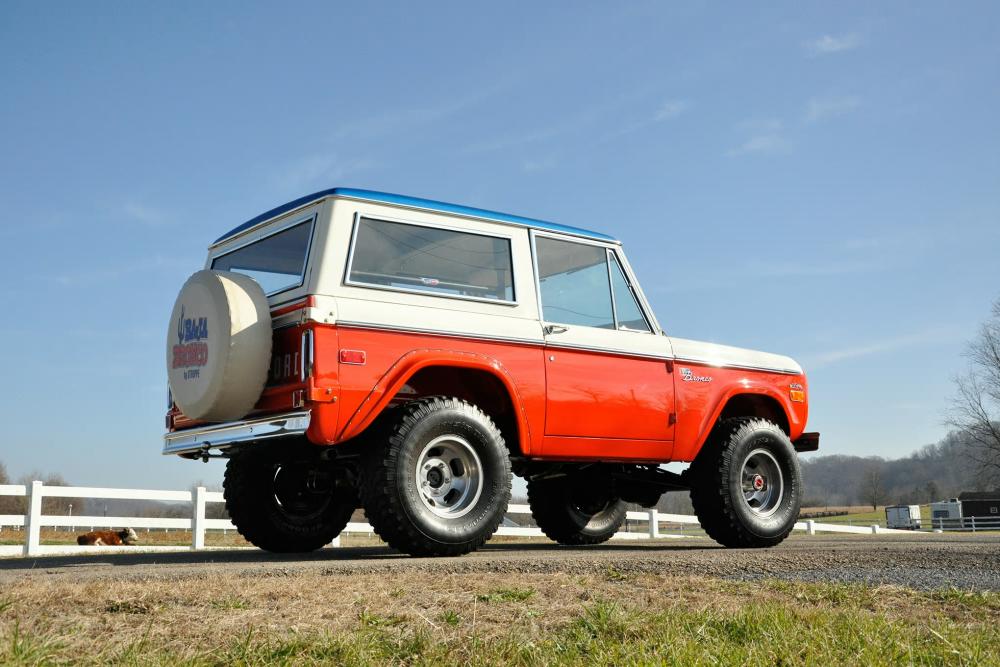 The winning notoriety of the Stroppe racing Broncos lead Bill Stroppe to offering limited-edition Baja Broncos like this one from 1971-1974.

By now sales of the little Bronco were being overrun by the Blazer and Cherokee, which appealed to a broader range of 4×4 buyers seeking even more power, room and comfort than Ford’s two-door bobtail offered.

The classic first Gen Bronco had a good 12-year production run. Even though total sales only topped 230,00, it played a big role in blazing the trail for not only the SUV market but also the compact SUV market of today. Ford hadn’t made any major changes to it other than upgrading the V8 and automatic, so big changes were made to keep the Bronco competitive in the ever-changing SUV market. 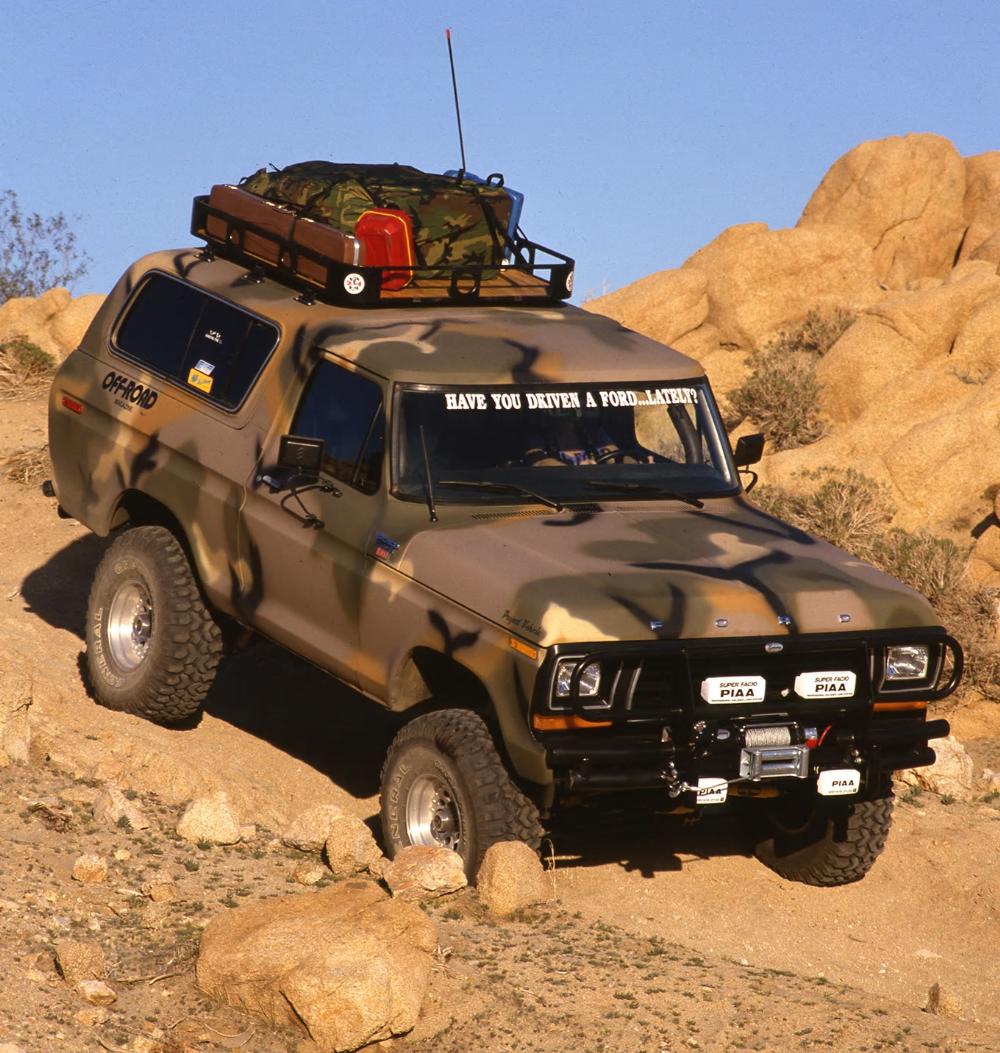 In 1978-’79 a new 106-inch-wheelbase Bronco emerged, sitting on a shortened F-100 chassis and sharing its drivetrain. A dozen years later one of these Broncos, a ’79 called “Project Deepwoods,” was one of Off-Road magazine’s project truck builds in 1991. Deepwoods generated more interest from readers than any other project build up to that time.

Ford kept to the same game plan from then on, staying with a bigger body based on whatever they did to the F-150. In 1980 the 3rd generation Bronco emerged, sharing the 104-inch platform and looks of the F-150. The Bronco was growing up and becoming a lot more sophisticated and refined.
The short wheelbase, roomy interior, and better suspension made the full-size Bronco popular for Ford-living families and those who wanted a very capable 4×4 truck with an enclosed cargo area. Off-roaders and outdoorsmen took to modifying the big Broncos in the same way they did the F-150s.
In 1987 Ford made another big facelift, still following the changes made to the F-150. More safety features are added and more bells and whistles to meet the demands of consumers. That 4th Gen Bronco lasted through 1991 when Ford once again made a major facelift to the 1992 F-150, and hence, emerged the 5th generation Bronco.

On June 14, 1996 the last Bronco rolled off Ford’s Wayne, Michigan, assembly line – accompanied appropriately by a 1970 Bobtail. The two-door Bronco was put out to pasture, replaced by the four-door Expedition.

Even though the Bronco is no longer in production, its legacy stands strong: Broncos from every generation still run the streets and trails. Those who own Broncos, especially the classic first-generation models, are loathe to let them go. When they do it’s often passed down to a son, daughter, family member or close friend.

Hundreds of Bronco related how-to articles and feature vehicles have graced the pages of this magazine, its predecessor Off Road, and other four-wheel-drive publications during the last 50 years. Such articles will continue to flow just as the love of the classic bobtail, and its full-size off-spring, keep owners engaged customizing them for all types of dirt sports and off-road pursuits.

Thankfully there’re a number of Bronco-specific and other aftermarket suppliers that have all the parts and accessories to restore and customize every model from every generation. We’ll be highlighting many of those products in buyer’s guides, how-to’s and features in coming issues this year.

Stock or custom, early model bobtail or full-size, the Bronco still fits right in with the off-road crowd it appealed to a half-century ago when Ford brought it to life. So to all those who own, work on, make or supply parts for Broncos, be they bobtails or full-size, a toast: Happy Golden Anniversary, Bronco! 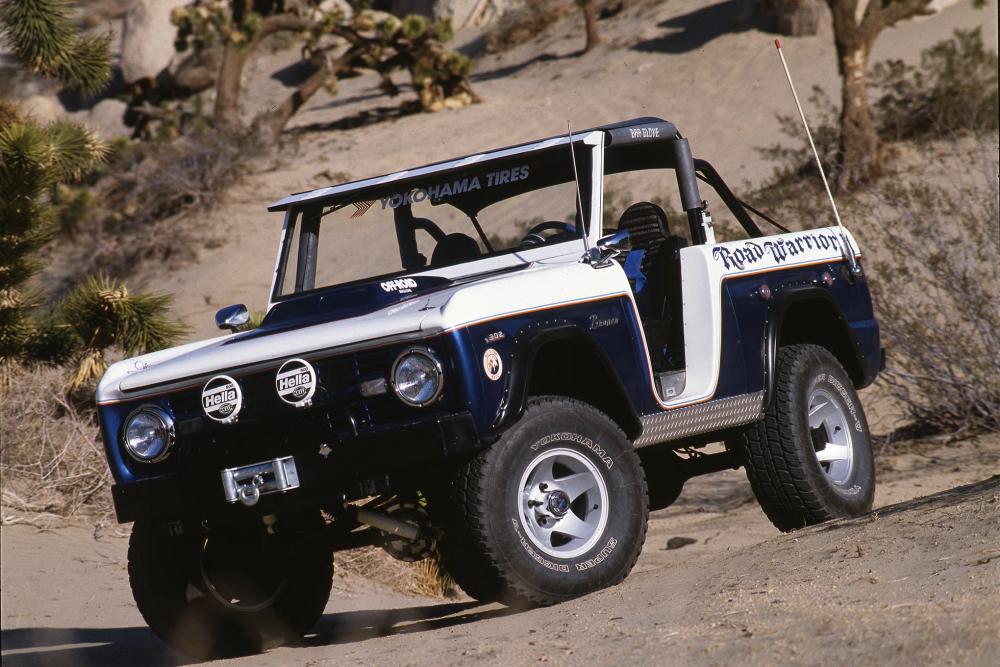 This 1969 Bronco of Mike Stockberger’s was featured in a 1991 issue of Off-Road. The same types of customization on the classic era are still happening today. 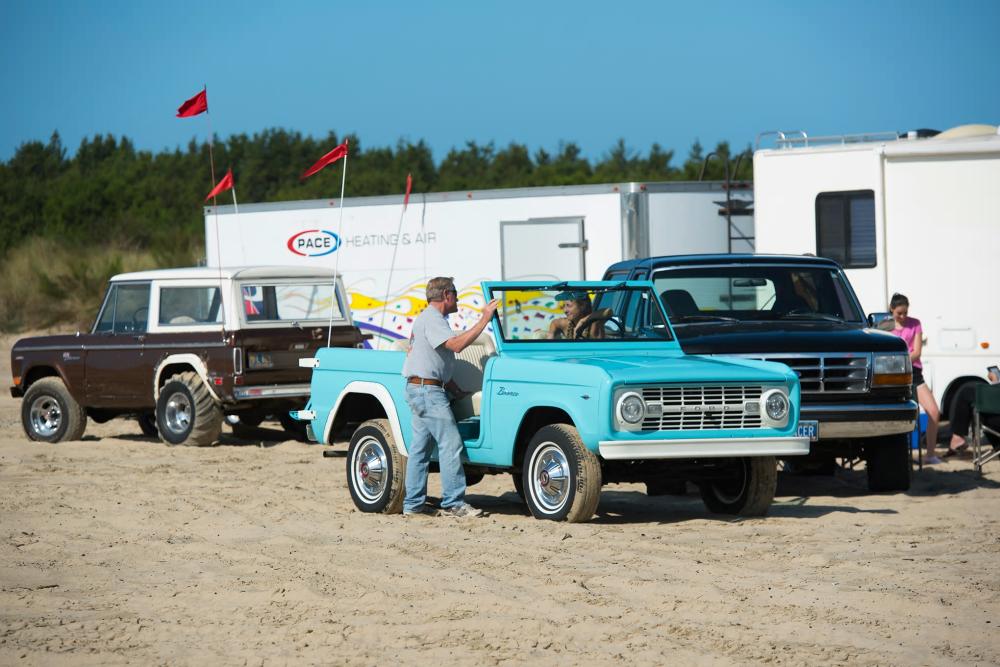 Lydia Maine’s 1967 “roadster” is rare as Ford only offered the ragtop during the first two years of the Bronco’s production. 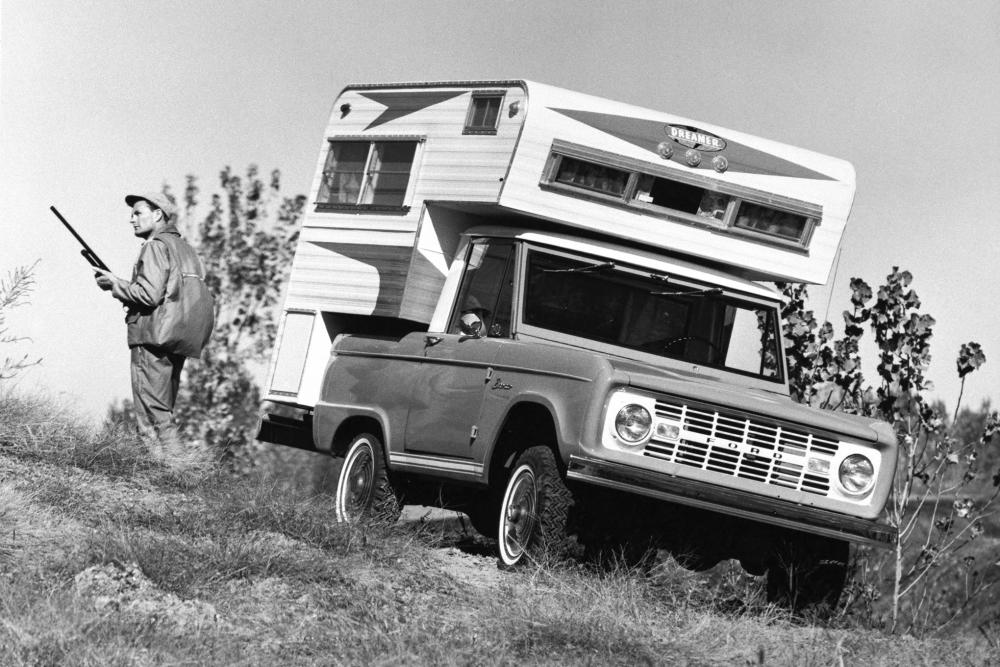 Ford really went after the outdoor lifestyle, even showing the Sport Utility model with a slide-in camper in its short bed. 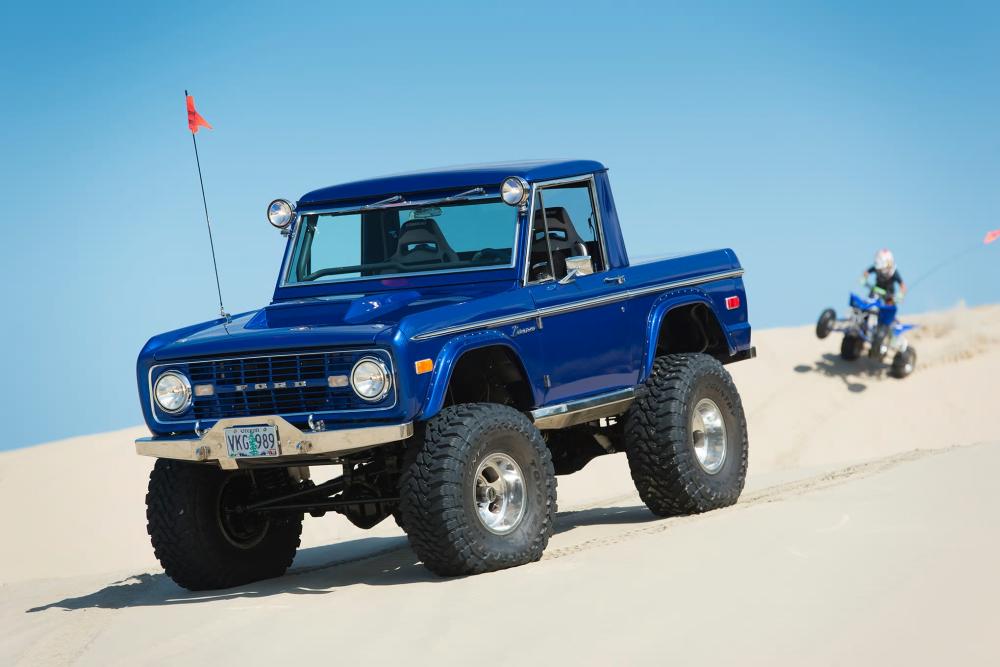 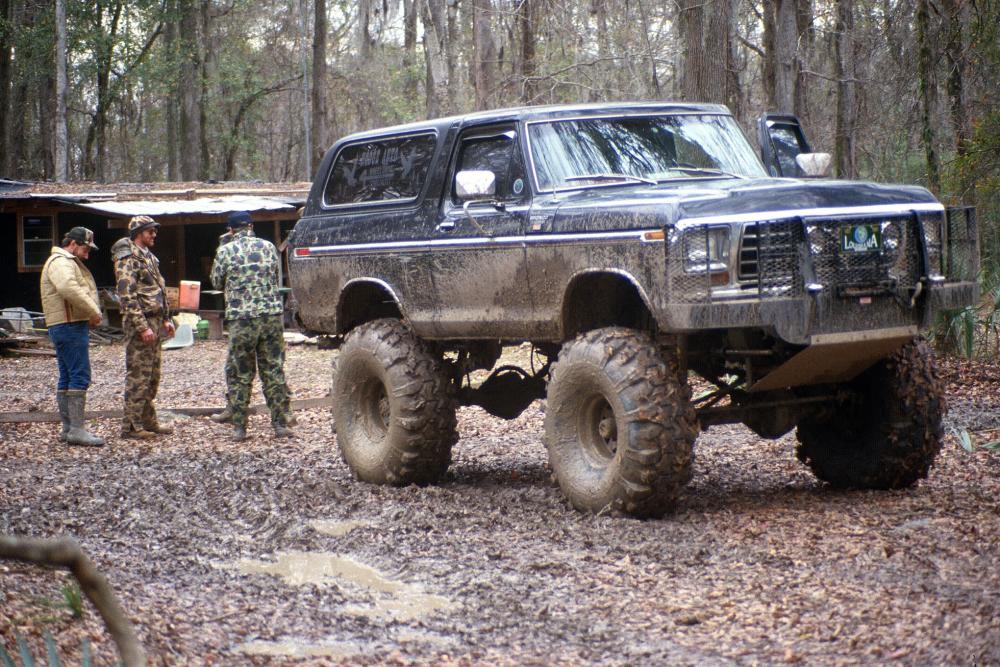 Early ‘80s Broncos were a big hit with many outdoorsmen. These hunters in south Louisiana found a big lift kit and 44-inch mudders were just the ticket when heading deep into the bayous. 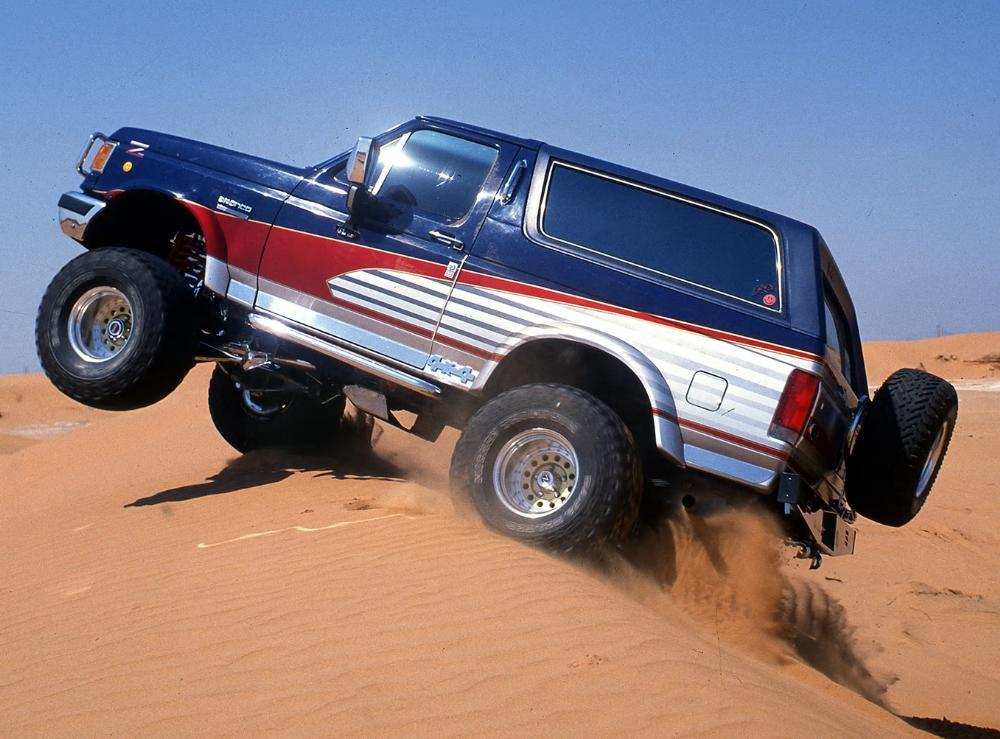 The popularity of the 4th Generation Bronco among off-road enthusiasts continued to drive creativity. This 1988 Texas Bronco, captured in action by the author, was featured in Off-Road Magazine in 1991. 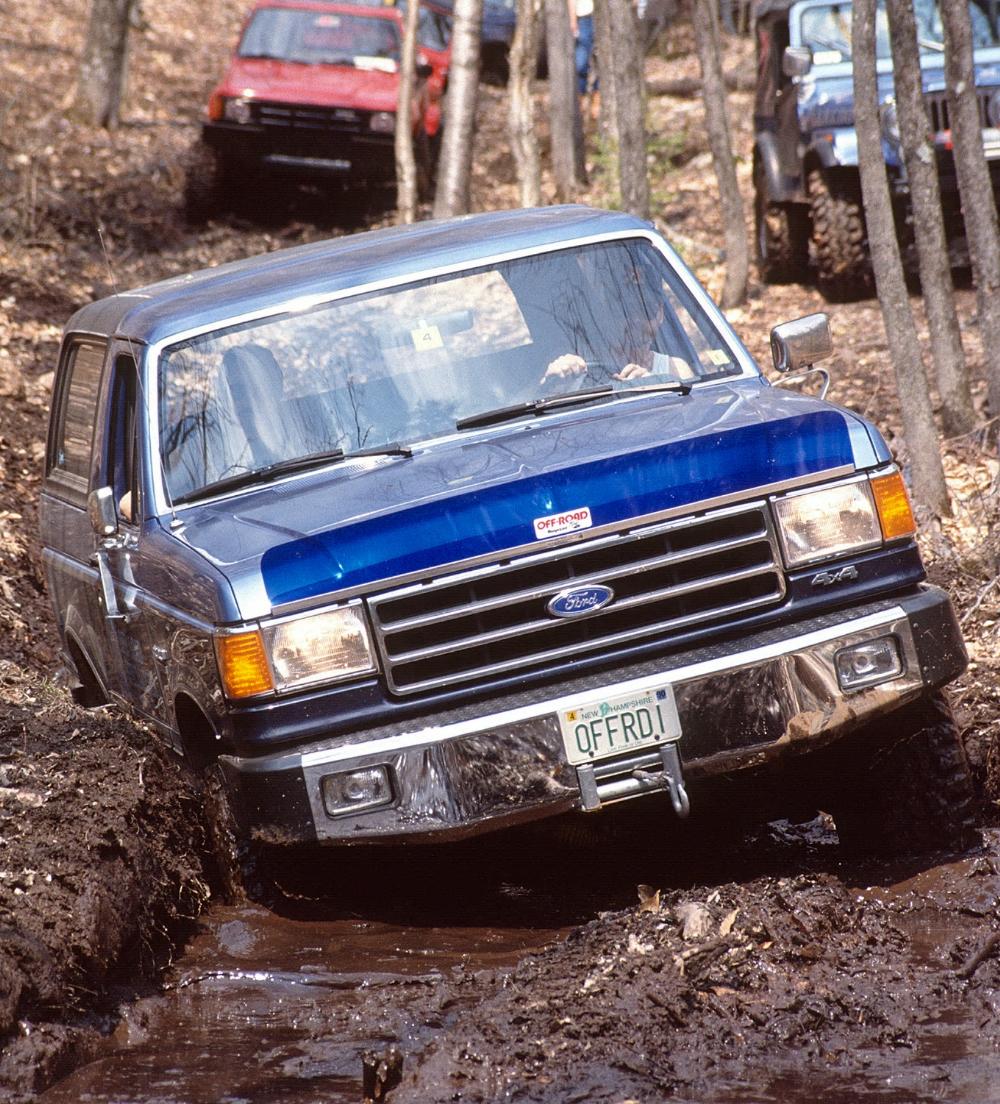 Some Bronco owners totally enjoy taking their trucks deep into the woods. This 1990 Bronco was owned by Jim Jackson of ARB Air Lockers who left many a smaller SUV in the mud back in the early to late ‘90s. 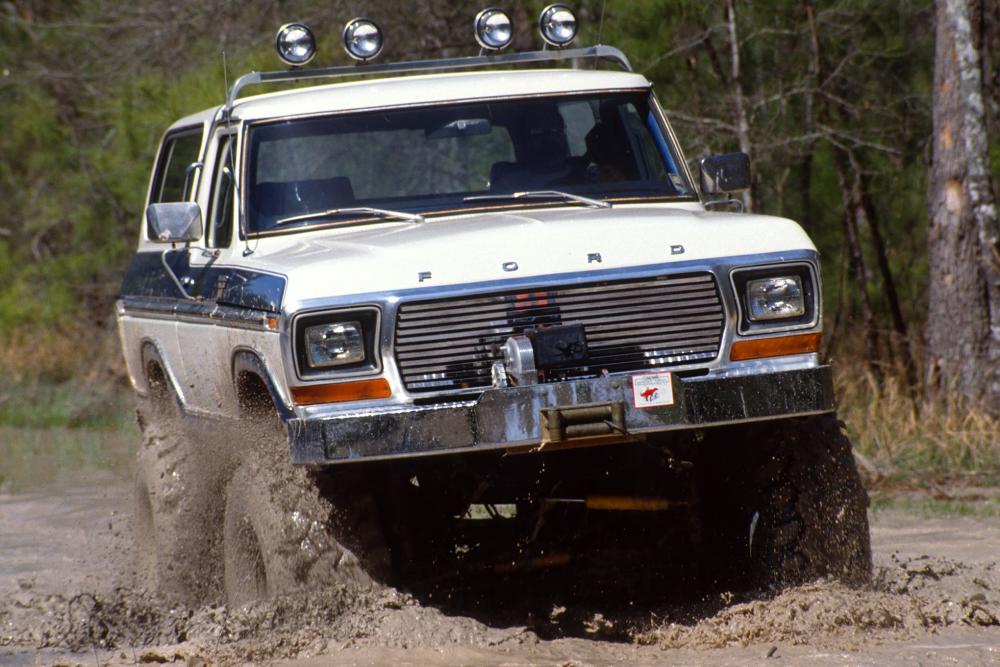 Getting’ down and dirty deep was (and still is) a popular Bronco activity on weekends for a lot of earlier generation full-size Broncos. 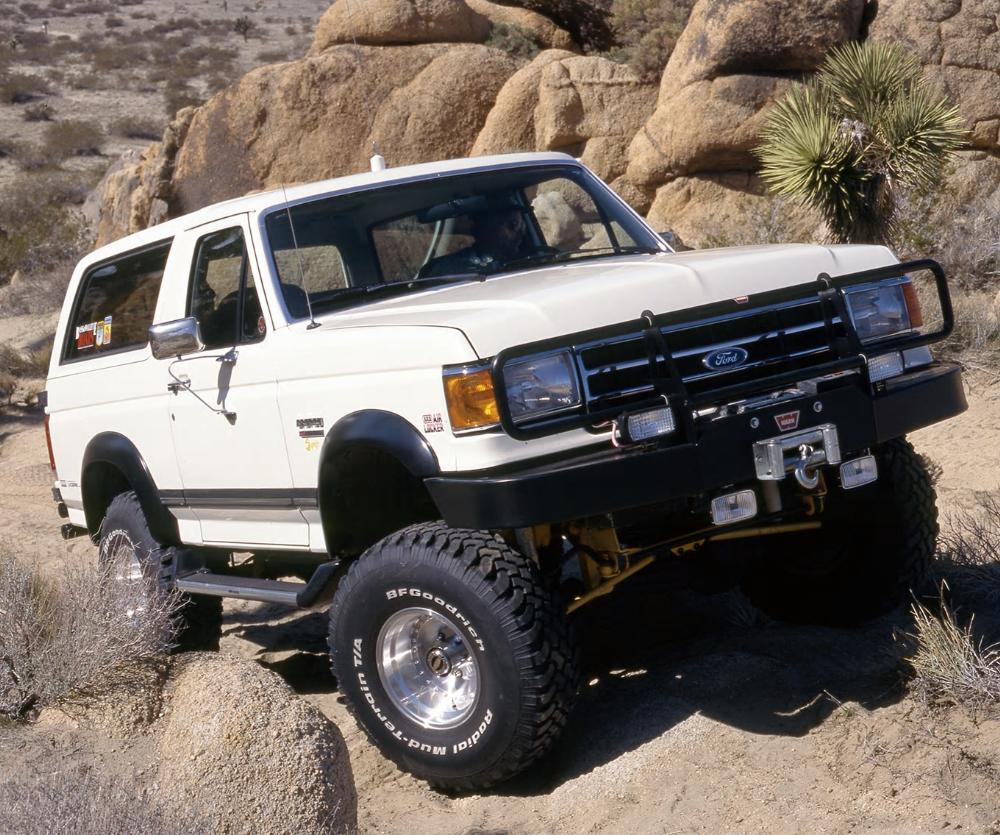 Author’s 1990 Bronco was part of an Off-Road Magazine project build in the early ‘90s. A six-inch lift, Warn winch, 35 BFG M/Ts and lockers front and rear made it quite trail ready. 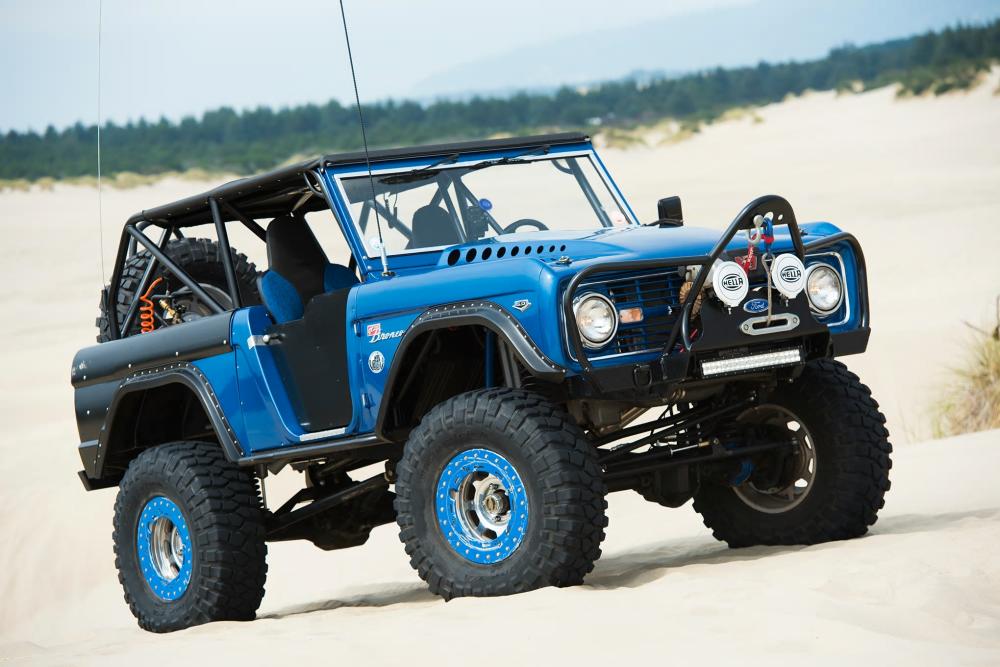 This purpose-built trail rig of Jim Shrum found the transition from the rocks of Moab to the dunes of Florence, Oregon, an easy one. His 1970 bobtail runs a custom, long-travel 4-link that he designed and fabbed. 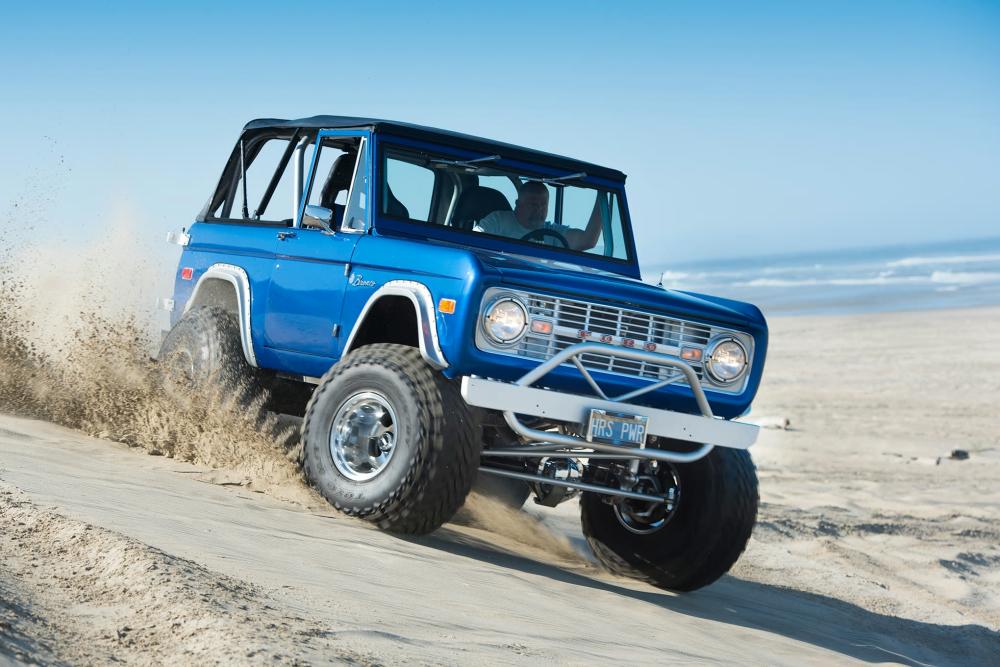 Andy Hess’s 1973 ragtop shows how the aftermarket supports the rebuilding and customization of the first generation Broncos.