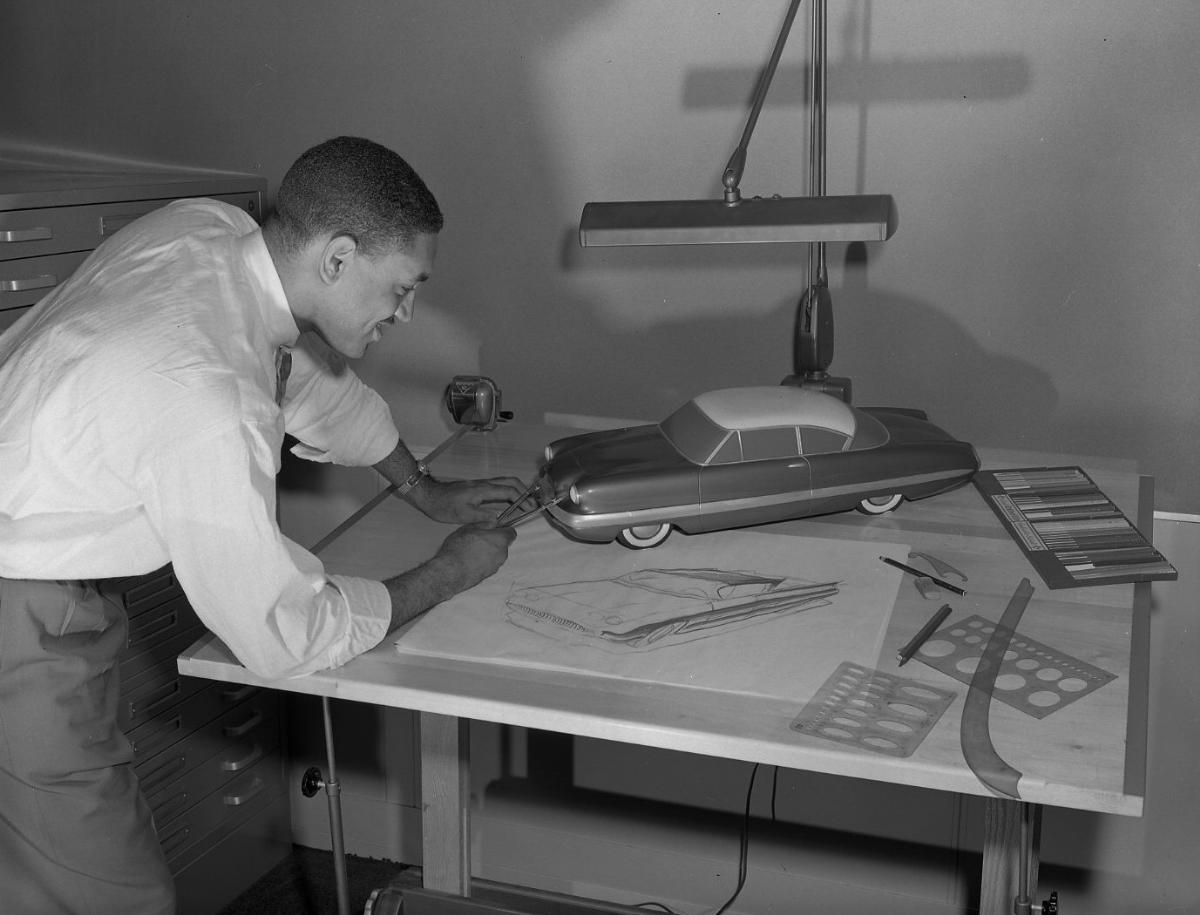 DEARBORN, Mich., Feb. 24, 2020 – Bronco is the product of legendary talent, from the teams who won the Baja 1000 to the collectors who restore them today. But there’s one legend in the story of the Bronco who not only helped create the first Ford 4×4 sports-utility vehicle design, he made history, becoming one of the first African American designers in the industry.

McKinley Thompson Jr., a Ford designer who helped pen the first-generation Bronco, was the first African American designer hired at Ford Motor Company after graduating from ArtCenter College of Design in Pasadena, California with a degree in transportation design in 1956.

His first assignment was at Ford’s advanced design studio in Dearborn, working under George Walker, vice president of Ford design. Among his projects was a light-duty cab-forward truck, several concept sketches for the soon-to-be Ford Mustang and the legendary Ford GT40. Thompson also worked on the futuristic space-age Ford Gyron, a two-wheeled concept car that was on display at the Century of Progress exhibit at the Ford Rotunda in 1961.

“McKinley was a man who followed his dreams and wound up making history,” said Ford Bronco interior designer Christopher Young. “He not only broke through the color barrier in the world of automotive design, he helped create some of the most iconic consumer products ever – from the Ford Mustang, Thunderbird and Bronco – designs that are not only timeless but have been studied by generations of designers.” 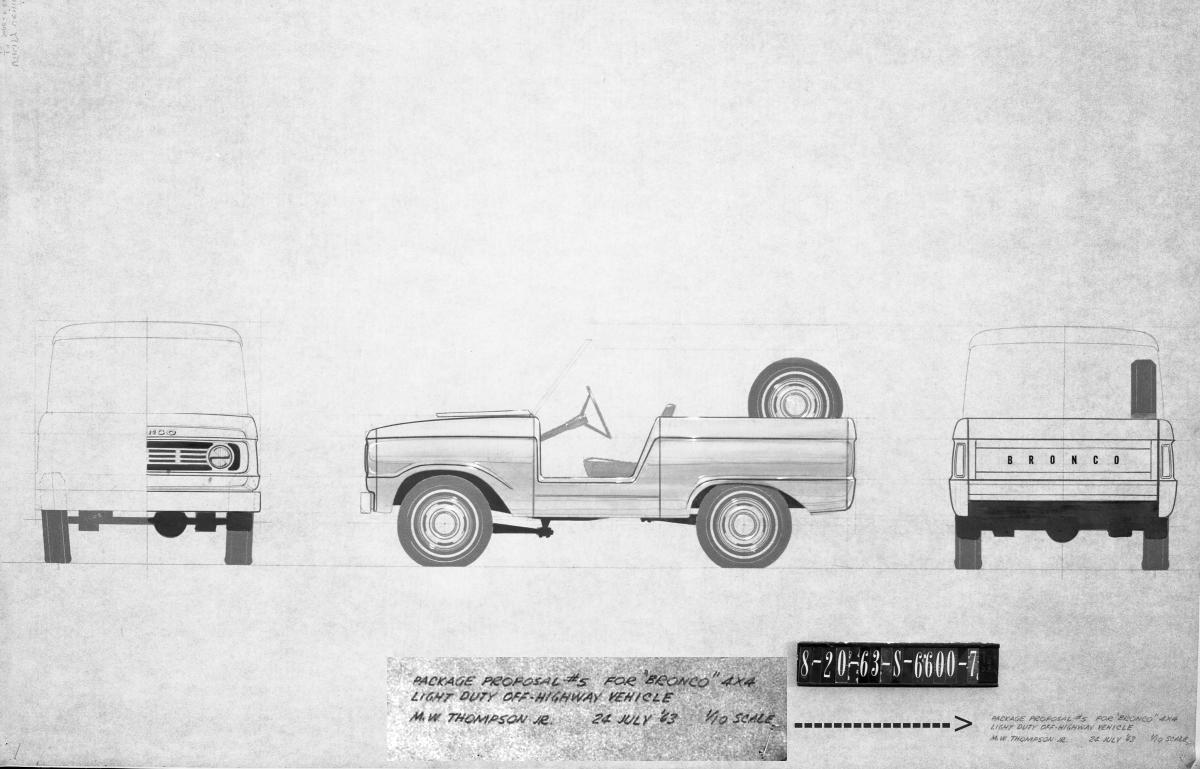 Among Thompson’s more noteworthy projects was the Bronco sports-utility vehicle, an open-air 4×4 concept featuring a square, short body and high ground clearance with minimal front and rear overhangs for optimum off-road capability. One of his designs, titled “Package Proposal #5 for Bronco,” rendered July 24, 1963, influenced the design language that would become iconic attributes of the first-generation Bronco.

In Thompson’s proposed design, the form and function of the wheels positioned at the far corners of the body for a confident and aggressive go-anywhere stance, while the curve of the wheel arches smoothing out conveyed speed.

“I believe the hardest thing for a person like McKinley to do was working within the constraints given him to make a beautiful product,” said Young. “Engineering dictates size and functionality, then manufacturing limits how it can be stamped and assembled, and finance says you have to build it for a low price.”

Thompson’s concept for an all-purpose compact two-door SUV is a theme he would return to later in life. After retiring from Ford, he worked to design and build a concept he envisioned as an affordable all-purpose vehicle named the Warrior. The small utility vehicle was based on a one-piece fiberglass body, a process Thompson dreamed of decades earlier. 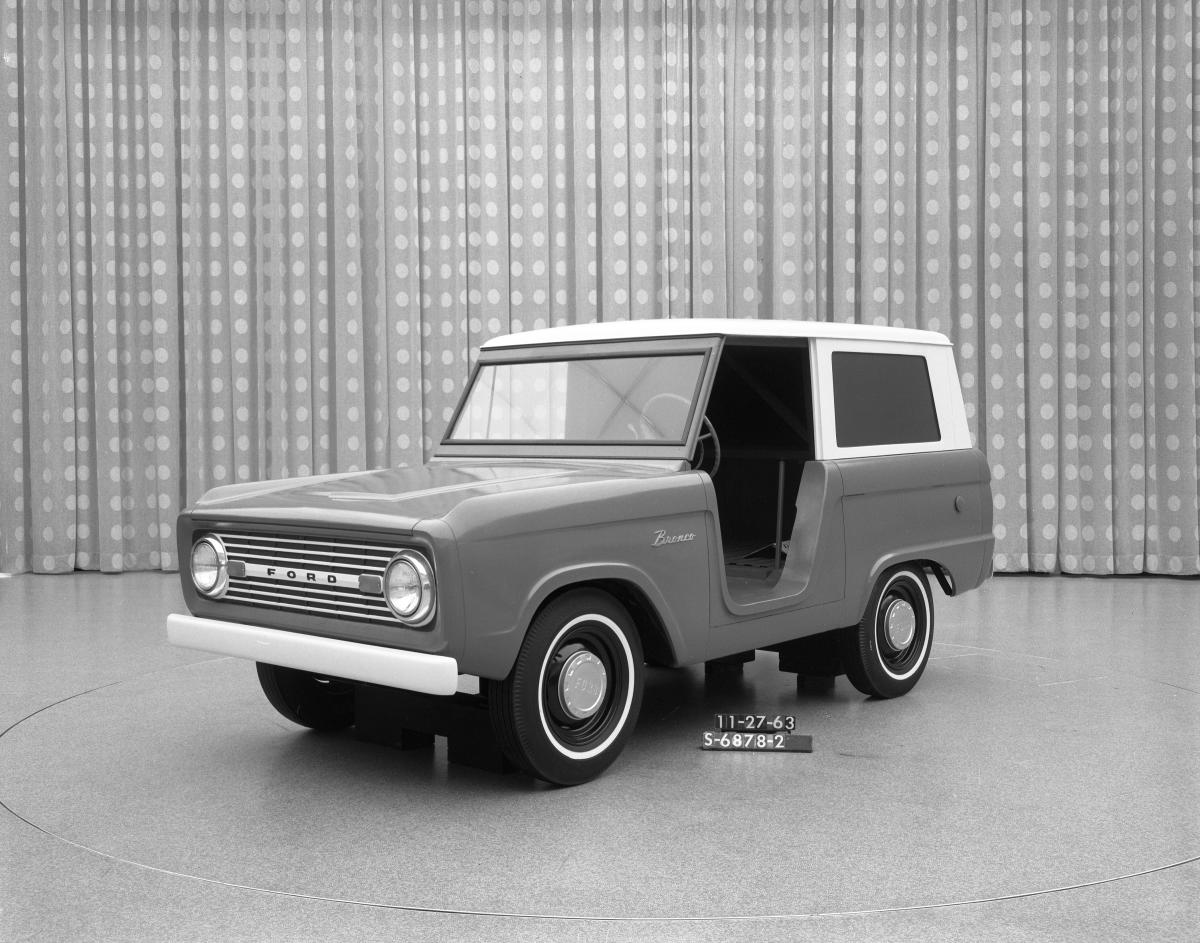 The Warrior And The Dreamer

Thompson was born in 1922 and grew up in Queens, New York. He had a keen interest in cars from the time he was young, and later recalled seeing a silver-gray DeSoto Airflow when he was around 12. “It just so happened that the clouds opened up for the sunshine to come through,” he said in an interview documented by. “It lit that car up like a searchlight.” Thompson recalled running toward it, but the light turned green. “I was never so impressed with anything in all my life,” he said. “I knew that’s what I wanted to do – I wanted to be an automobile designer.”

Thompson served in the Army Signal Corps in World War II, learning drafting and working as an engineering layout coordinator. After the war, that work provided for him and his growing family, but Thompson’s love of cars and his dream of being a designer persisted. In the early 1950s, he entered a design contest in Motor Trend magazine, submitting a turbine car with a reinforced plastic body, both concepts that were trending in the postwar era.

He won the contest, then went on to enroll in the transportation design department at ArtCenter College of Design.

Later on in his Ford career, Thompson worked on the side to create his dream car in a rented garage in Detroit from 1969 to 1979, enlisting the help of Wallace Triplett, who had also broken the color barrier as the first African American draftee to play for the Detroit Lions in 1949. Together, they built a prototype and pitched the plans to burgeoning automakers in developing nations. Thompson hoped to change these countries for the better, much the same way Henry Ford envisioned with the Model T.

Eventually, Thompson pulled the plug on the project – but not on his dreams. He retired from Ford in 1984 and moved to Arizona with his wife. He passed away on March 5, 2006.

“McKinley’s influence, beyond his work on the original Bronco, helped pave the way for others like him who might not have had an opportunity to express their creative talents and live their dreams to be a part of one of America’s greatest companies,” said Young.