In 1980 the Bronco went from a straight Dana 44 front axle to what Ford calls the Twin Traction Beam (TTB) front suspension. The TTB system is Fords version of an independent front suspension, and was used on the Ford Bronco from 1980-1996. Mechanically, the TTB axle is similar to a straight axle, but instead of a solid axle tube, the differential and steering knuckles are attached to beams. The inboard ends of the beams are attached to a frame-mounted crossmember by a bushing, while the outboard ends support the steering knuckles and are attached to the frame through the springs and radius arms.

Most people are familiar with the locking hubs on Dana 44 axles. The Dana 44 TTB uses the same locking hubs, except for some 1987-1988 models. 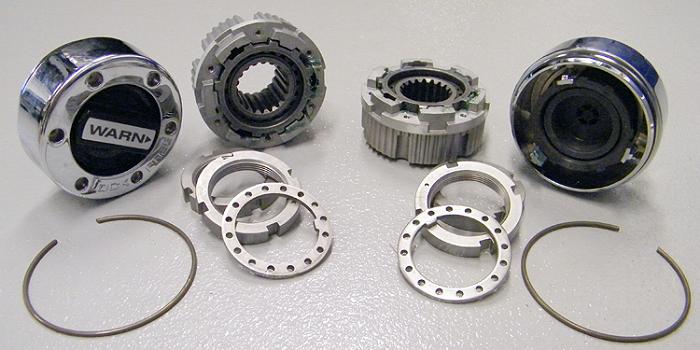 For some reason in 1987-1988, Ford used a one piece flange style manual locking hub similar to the ones found on the Ford Ranger & Explorer. 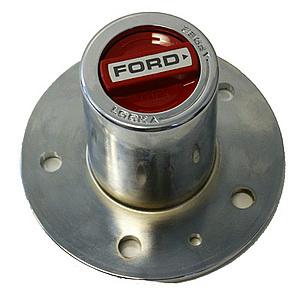 Here’s a setup you don’t see that often. It seems that the 1980-1983 Dana 44 TTB and Dana 50 TTB trucks that were equipped with a front limited slip differential also came with a unique housing that held the passenger side axle shaft in externally with (3) bolts. In the photo below, you can see the typical housing on the left that the passenger side axle shaft slides in to, and then the shaft is retained internally with a c-clip. You’ll notice that the housing on the right has a much larger opening to allow for a bearing, and the whole assembly is retained by (3) bolts. 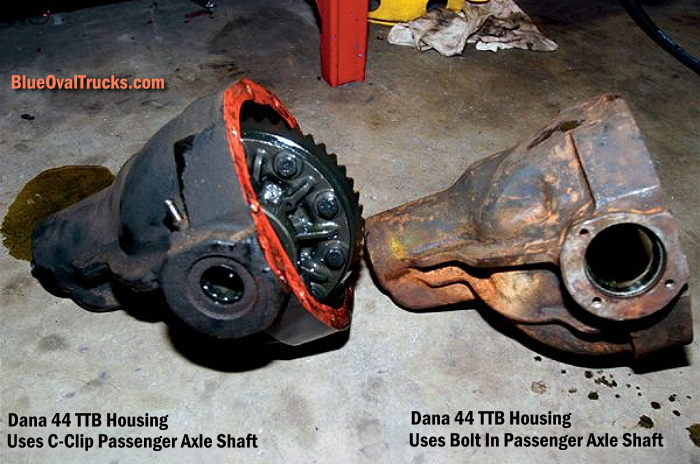 The photo below shows the difference between the passenger side axle shaft that is held in with a c-clip, and the one that is bolted in. 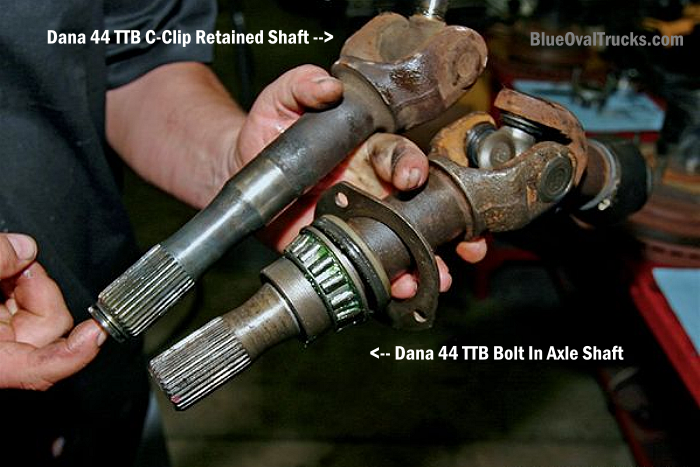 Why would you want this setup? Because you don’t have to worry about a broken c-clip, and the shaft sliding out of the housing when the suspension flexes off-road. Some people put a spring in the passenger side slip yoke to keep pressure on the shaft so it stays in place. This is permanent fix to that problem if you can find the housing with the bolt in shaft still in place.

This is what you would likely see if you were to crawl under one of these trucks and look: 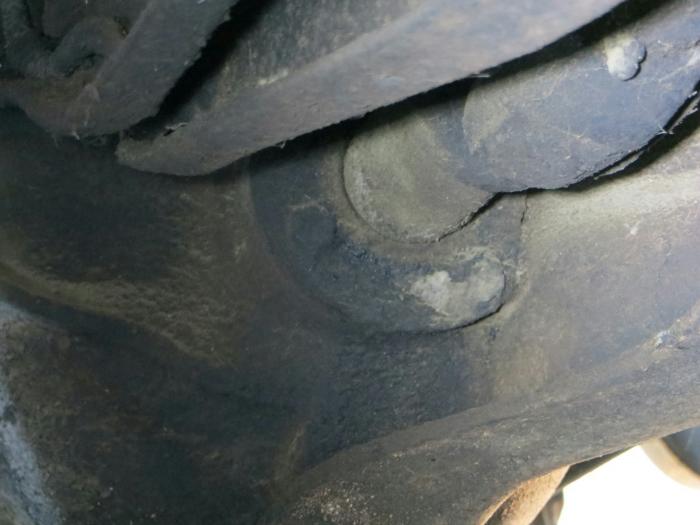 Here’s the Spicer part numbers for the bolt in parts if anyone is interested:

Parts for the C-clip version are:

Dana 44s are reverse rotation hi-pinion. Most are a 3.50 gear from the factory. A new carrier is needed for gears lower (numerically higher) than 3.92

There are (3) styles of carriers:

Not all Dana 44 TTB spindles are the same.

If for some reason you need to replace a spindle, you need to be sure that your ordering one that matches the one your replacing.

See the photo below for reference. 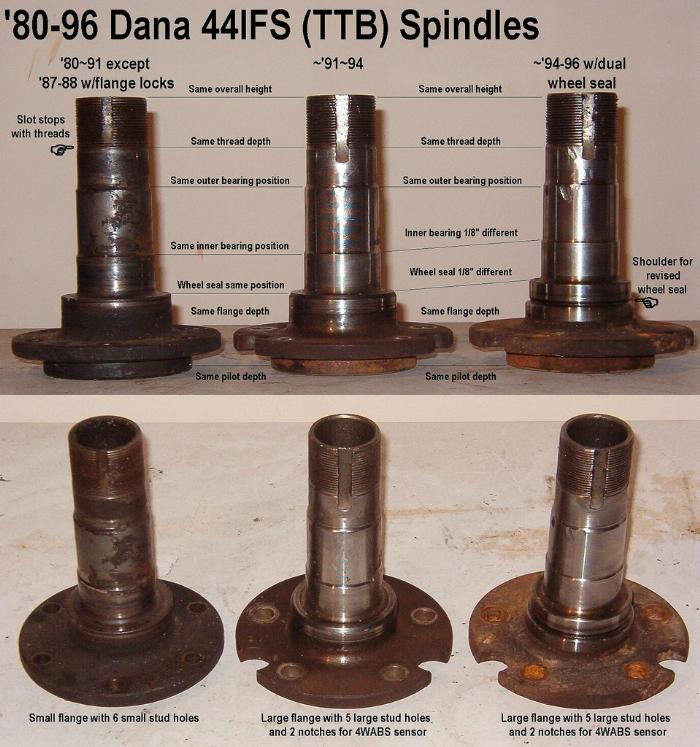 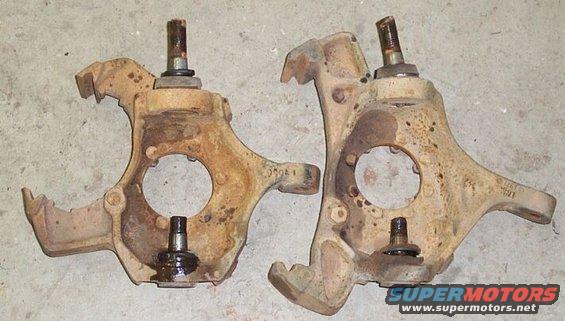 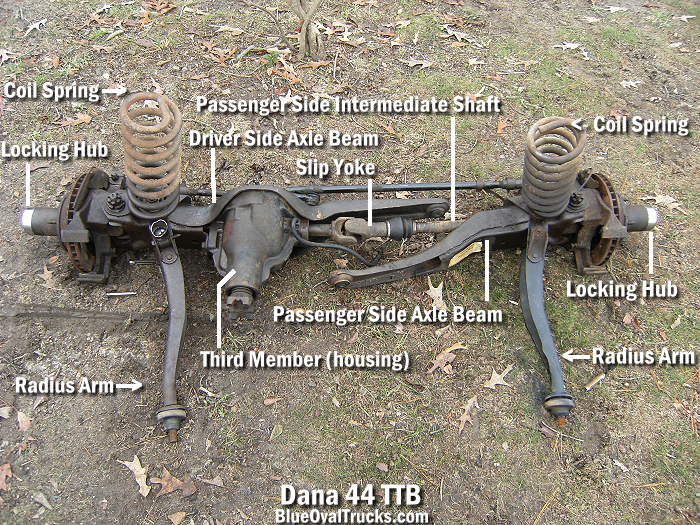 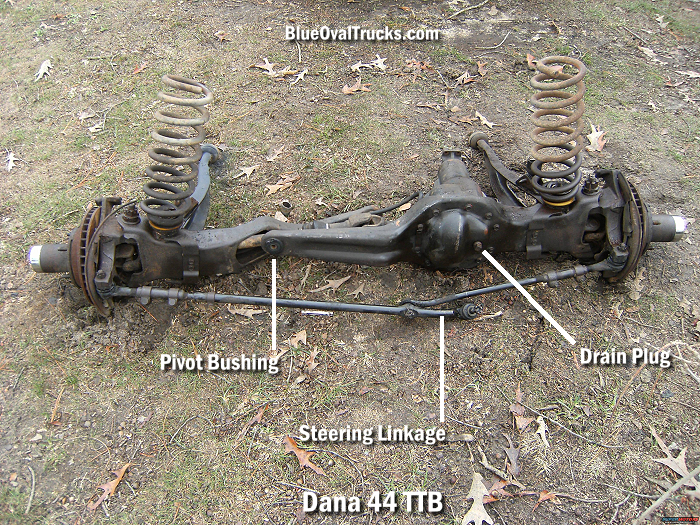 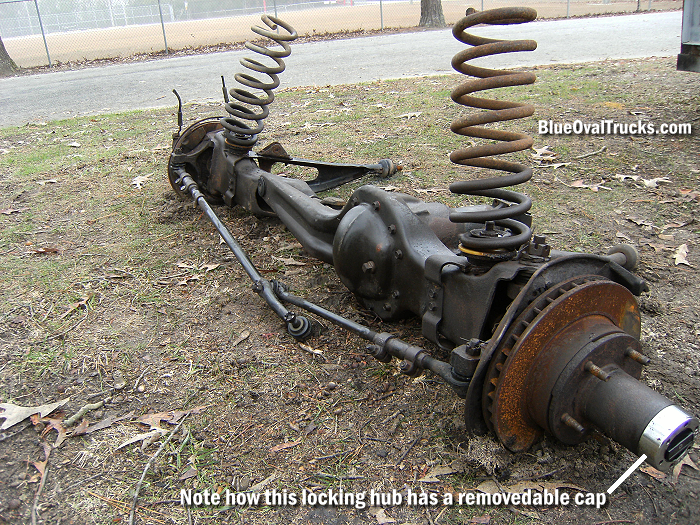 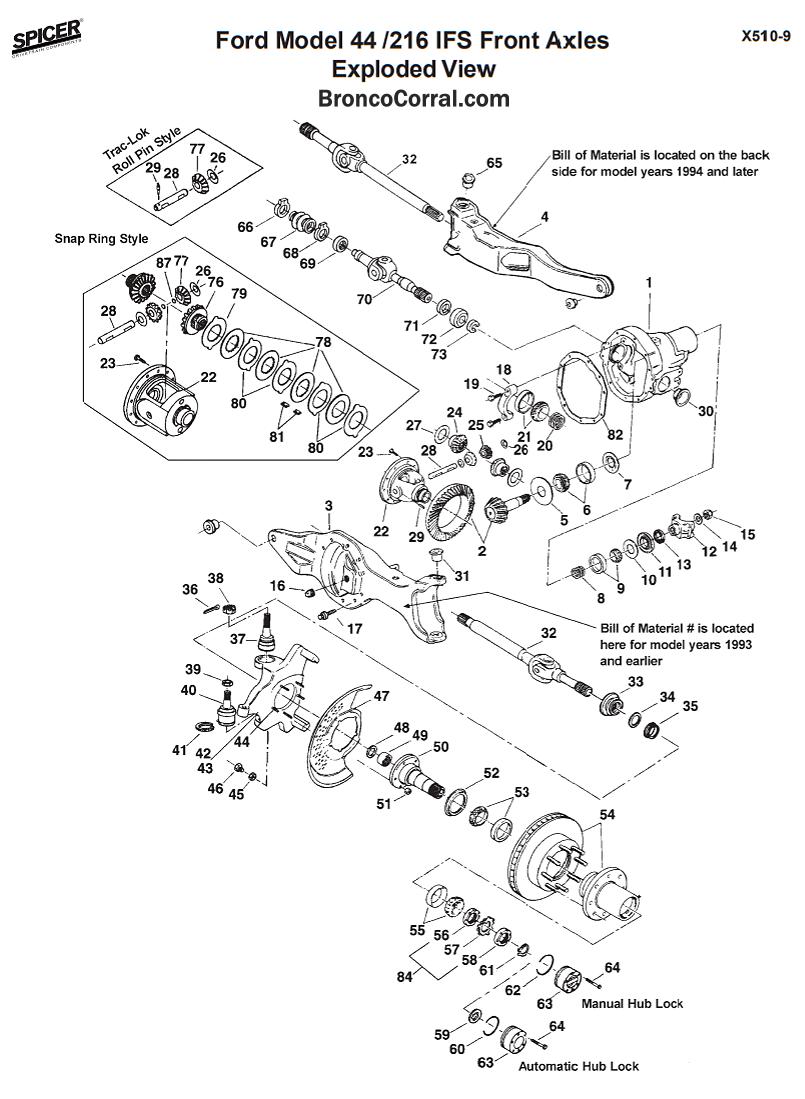 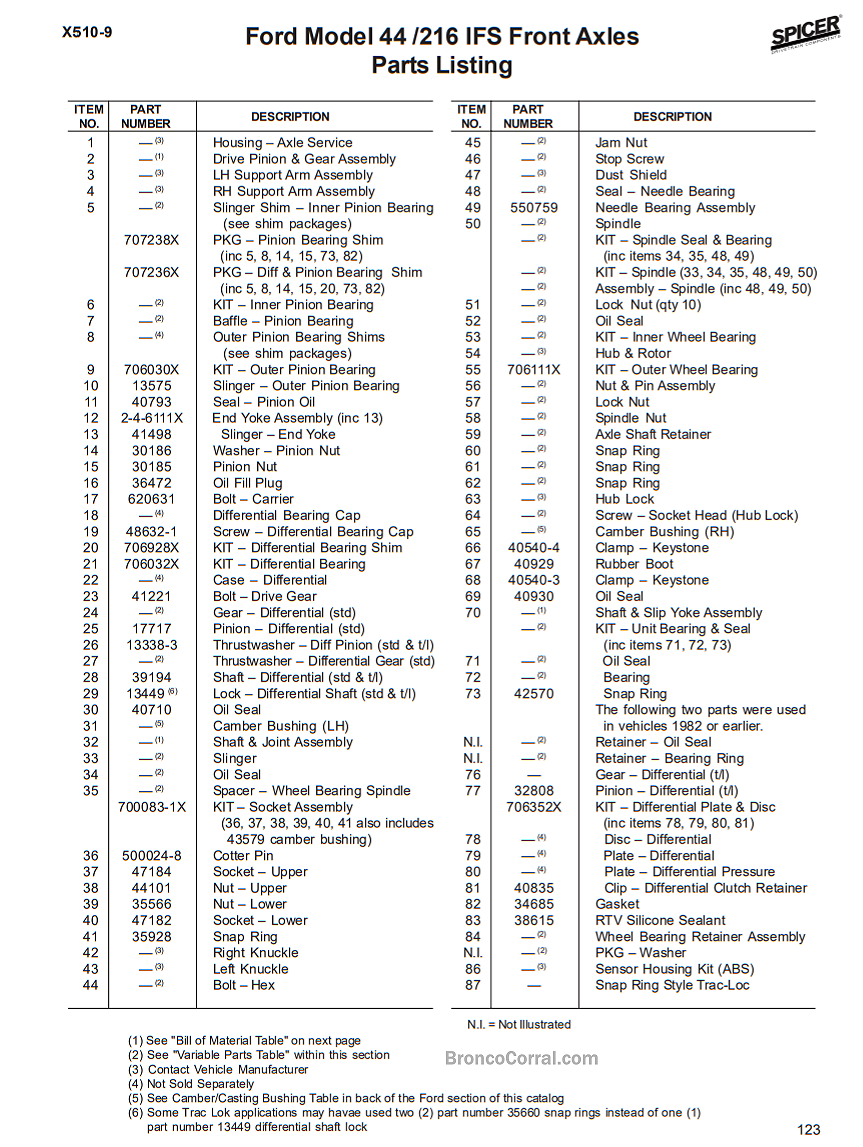 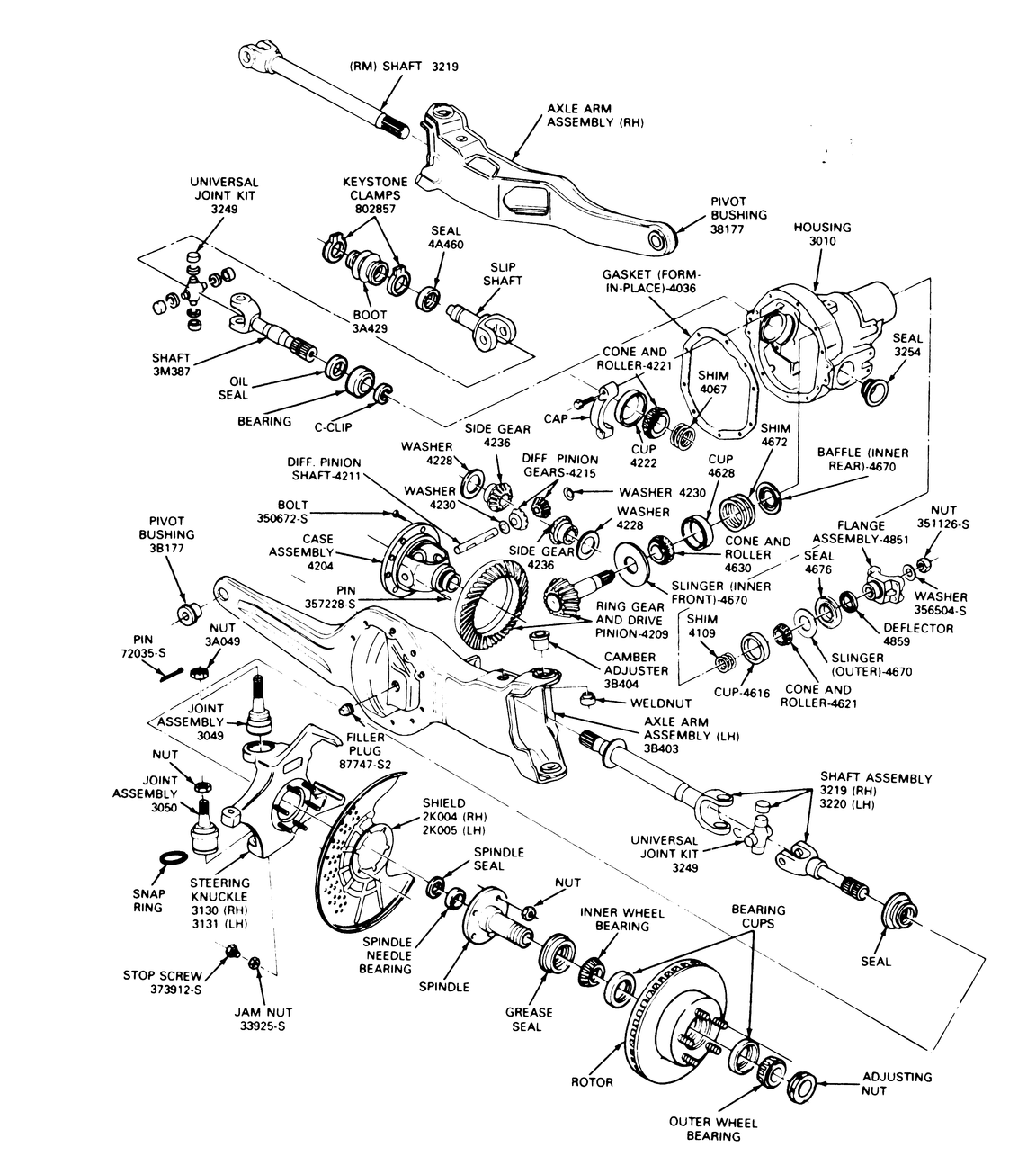