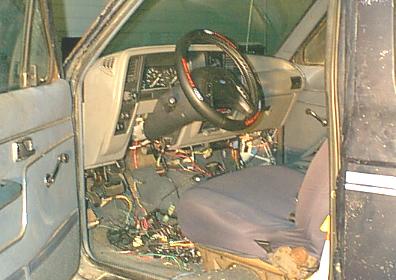 After converting my ’85 Bronco II over to a 4 Liter, I installed the transmission that would work well with it and realized one thing… my floor shifter won’t shift this thing. I looked into numerous solutions. Neither Hurst nor B&M makes a shifter for this application (as of 11/05/02), I decided the whole darn dash from the truck with the column shifter would come along as well. This not only simplifies the installation of the engine and wiring harness, it is actually SO SO much simpler than you would think.

The hardest part was probably taking the Saws All and enlarging the hole in the firewall that the steering column passes through. If you are capable of wiring a 4 liter into your truck, you are perfectly capable of doing this swap, I guarantee it.

I would like to make a few personal recommendations

I recommend using the Explorer dash as opposed to the ranger in the Bronco II, because it gives you the controls for rear windshield wiper/washer/defroster, etc, whatever you’re equipped with. If you don’t have those, which mine didn’t, you can always use the factory switches to power some off road lighting, map lights, whatever you want, and still have the clean, sleek look to your dash.

Obtain a repair manual for the donor and project, to aid with the wiring. Remove the donor dash with all the wiring harnesses in tact! This not hard to do.

Removing the old dash is fairly self explanatory in the repair manual, and surprisingly the new dash bolts up pretty much the same as the old one did. Pretty much first you remove the steering column, then unbolt the top dash cover that is held on by a bit of screws, then you take out the 4 screws that hold the dash in right where the windshield meets, the 2 bolts that hold it in down near the corners in the kick panel, and the braces that are located near the steering column and gas pedal. The dash comes right down, it’s that simple. disconnect the wiring from the dash, or cut it if you like, cause you really don’t need it.

You must remove the brake pedal/steering column support assembly from the donor and replace yours with it. There are no interchange issues with these, the power brake boosters pretty much have all the same bolt pattern. Here are some pictures to show you a few key points of what must be done. 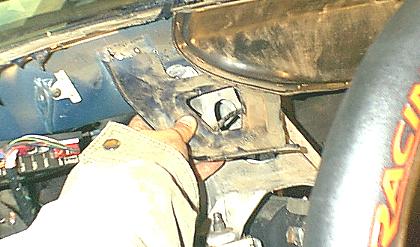 The piece I am depicted here holding in place must be removed in order to mount the new steering column securely. It is held on with 3 small tac welds on each side. I pried mine off with a screwdriver with minimal damage, This part and enlarging the firewall hole for the steering column were the only real modifications that it took. 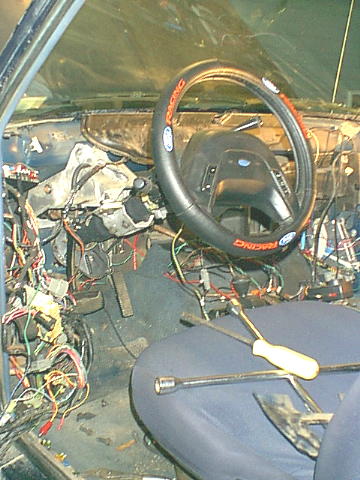 Here it is almost ready to put the dash on, the only thing left that needs to be taken off is that defroster air duct.  Other than that, the A/c systems are entirely interchangeable except for some of the later model dashes had a vacuum motor that controls weather or not inside or outside  air is taken in. If your  a/c control has 2 cables, this is what you have. If it has 3, then you don’t  even need the vacuum circuit.

Pull all your original wiring to the drivers side where it comes through. This way you can  hang it down out the door, out of your way, however it will still be there when you come to hook things into your new harness with the original connectors in case you forget where they go. The defroster air duct in this picture  still needs to be removed before  putting the dash on, as well as a small black box on the drivers side kick panel about level with the steering column. I believe it  is some sort of control for the windshield wiper delay. 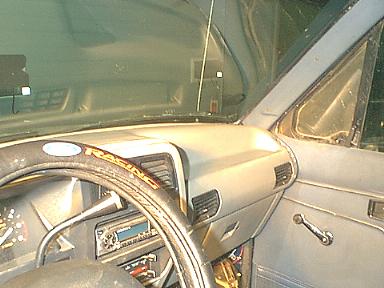 Here the dash is in the vehicle, but no wiring has been done yet. This is the overall look to expect here minus the wires that will be spliced into their proper places eventually, and the cover that goes over the bottom of the steering column. I am happy with my choice on the conversion, and should have the wiring and all done by November 16, 2002, when I will update this site again. Like I said, the wiring is no trouble as long as you have a good diagram for the donor and the project. I know this for a fact because I have already converted the under hood when I swapped over to the 4.0L V6 and complete explorer fuel injection.