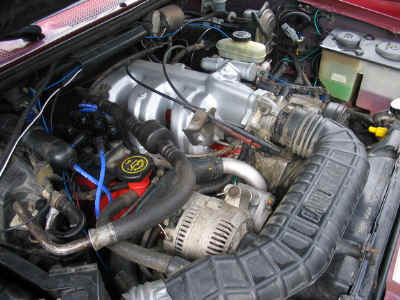 The 4.0L OHV (Over Head Valve) V-6 engine found its way in to the Ford Ranger in 1990 and ultimately replaced the 2.9L V-6. Information on this engine is being provided because many Bronco II owners have swapped it in to their Bronco II.

This evolutionary redesign of the American 2.9L solved many of the reliability issues that plagued its predecessor. A beefier cylinder head design eliminated the 2.9L’s common failure of cracked heads. Hydraulic roller lifters replaced the simple hydraulic lifters used in the 2.9L, which were sometimes overly sensitive to oil contamination, often requiring the lifters to be replaced prematurely. However, one major design fault was not completely eliminated: Valve rockers and upper pushrod tips still received poor oil supply, resulting in eventual wear to these areas, and consequential valvetrain noise as a result of the increased clearance. Required replacement of these parts is common in older engines.

The 4.0L OHV engine was produced until 2000 and was used in the Ford Explorer and Ranger. Output was 160hp and 225 ft·lbf. Though there is some variation, typically 155hp is quoted as horsepower for 1990-1992 applications.

The difference between a SOHC 4.0L and OHV 4.0L is that in a SOHC engine there is a camshaft sitting on the top of each cylinder head with the valves running directly off the camshaft. It doesn’t rely on push rods, rocker arms, or lifters. The SOHC engine uses a jackshaft in place of a camshaft to drive a timing chain to each cylinder head. Three timing chains are used, one from the crank to the jackshaft, one in the front of the engine to drive the cam for the left bank, and one on the back of the engine to drive the cam for the right bank.

The OHV engine has the cam mounted above the crank. The cam and crank are joined in time by a timing chain. Lifters ride on the cam and push rods that extend to rocker arms in the heads which push the valves.

Missing or Bogging –  There are several things that could be causing this.  First off your MAF may be dirty. Check HERE on how to clean it. Then there are the obvious – plugs, wires, dirty injectors. Tune up items basically.

Also, if you get a problem with hesitation, check the wires around the exhaust. One of the oxygen sensor wires may have been damaged by the exhaust.

How To Build Performance:

Check this article on ‘How To Build A Ford 4.0L OHV For Power‘. 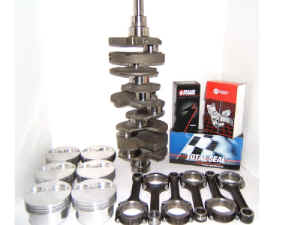 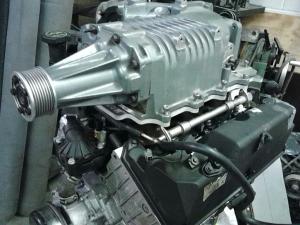 Camcraft: Offers a new camshaft for the 4.0L.

Competition Cams: Offers camshaft# 49-410-8 as an OEM replacement good for towing and all around performance. Camshaft# 49-422-8 is a more aggressive cam for 4.0’s with other modifications. It is designed to improve midrange power and torque.

Thomas Knight: Offers a kit to install an Eaton supercharger on the 4.0L Ranger.

Gibson and Dynomax: Both offer cat-back exhaust systems for the Ranger.

Nitrous Oxide Systems (NOS): Nitrous Oxide Systems (NOS) showed the world how to effectively harness the power of nitrous oxide for automotive use in the 1970’s. Since then, NOS has powered more racers than any other brand of nitrous. When you’re looking to go fast, rely on NOS to deliver the most power per dollar available. From stock engines to race vehicles, jet skis to trucks, NOS has a kit for you.

Port your upper and lower intake.  The intakes don’t line up diameter to diameter.  Porting opens this up and allows better flow.  Knife edge the intake side of the throttle body to remove the front lip.  You can use a Dremel tool to grind, sand and buff this area to obtain a smooth airflow in to the engine.  You can also mill down the butterfly to blend in to the shaft for a smoother air flow.

For details on how to port your heads, click HERE.

MSD – Manufactures a DIS ignition system along with wiring harnesses.  Find their parts at Summit Racing.