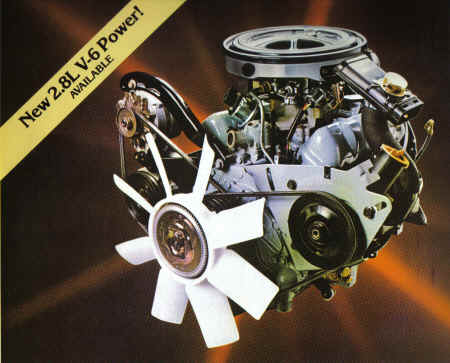 The Ford Cologne 2.8L V6 is a 60° cast iron block V6 engine built by the Ford Motor Company in Cologne, Germany.  The 2.8L engine in the Bronco II is the same design as the 2.8 V-6 used since 1974 in the Ford and Mercury Capri vehicles.  A unique feature of the 2.8L is the timing gear vs a traditional timing chain (See picture below). 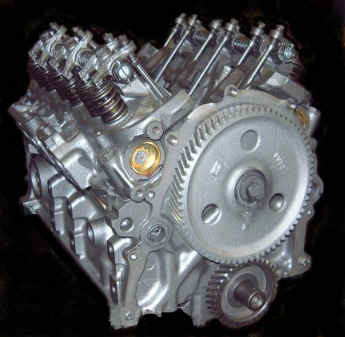 Valve Seals – The 2.8L’s are known to burn oil and smoke when they get high mileage.  They use a rubber valve seal that deteriorates and leaks oil into the cylinder.  Click HERE for information on replacing the valve seals.

Loose Distributor Rotor – Some of the Ford 2.8’s came with round distributor rotors. These have (2) screws that hold them in place. There have been reports of them coming loose in the distributor. Click HERE for more information.

TFI Failure – If your truck stops running and wont restart, it could be from a faulty TFI. Click HERE for more information.

Cooling – A simple upgrade to the 2.8L heads is to drill two more water passages in them between where the two exhaust valves are side by side.  This helps prevent a local boiling point from forming.  Just use a good head gasket that already has the water passage holes in them for a guide, and mark the head and drill two holes.  Keep the holes a little smaller than the holes in the head gasket. – Contributed By Ryan Propst

Porting – Port your intake manifold and cylinder heads.  The intake and heads don’t line up diameter to diameter.  Porting opens this up and allows better flow. Click HERE for details on porting.

The 2.8L V-6 comes with a 2-bbl carburetor and manifold with a traditional round metal air filter container.  Offenhauser offers a 4bbl intake manifold (RWA6110).  The ignition system must be changed to earlier vacuum advance unit (Dura-Spark II) eliminating the EEC-IV computer and pollution equipment.  You can use the distributor, ignition module and coil from a 78 Pinto.  The Offenhauser Intake does not have an EGR setup. This will not allow the A4LD tranny to shift correctly.

The Offenhauser intake can be found at Racer Walsh (below):

Racer Walsh carries the Offenhauser 2.8L aluminum intake manifold for the Ford 2.8L, and works with the RWA6239 4BBL carb. You will need to use the RWA6278 thermostat housing with the new manifold. The intake manifold and carb combo are made for street driving and lower rpm off road applications, such as trail riding and playing in the mud. The installation of the manifold and carb still provide good gas mileage and an easy horsepower improvement.

In addition to the carb and intake, Racer Walsh also offers camshafts, valve springs, valve spring retainers, and pistons for the Ford 2.8L.

You can also convert to fuel injection using parts from a 3.8L Ford.  Check out:

Fuel Injection For Your Ford 2.8L

The air cleaner can be modified by adding another air intake and then routing intake hoses to a fresh air source providing a dual ram air effect. This of course should be accompanied by a K&N Air Filter.  There are many 2-bbl air cleaners out there of different dimensions, and it’s metal design allows for modifications for any type of set-up.

MSD offers wiring harnesses to simplify the installation of a MSD 6 series box on late model vehicles. The harnesses plug in between the ignition coil and the factory coil connector. Four wires with corresponding colors and matching connectors then connect directly to the MSD 6 wires. These harnesses reduce the installation time, reduce or eliminate cut wires, and allow you to quickly convert back to the factory ignition.

The MSD to Ford TFI Coil Harness is designed to provide a splice-free and simple installation of an MSD Ignition Control to Ford vehicles equipped with a TFI Coil. On MSD 6 & 7 Series Ignitions all of the wires connect to the corresponding colored wires. MSD 7 Series Ignitions share the same color wires.

1. Disconnect the connector from the coil and connect it to the MSD PN 8874 Harness.

2. Connect the other end of the Harness to the Coil.

3. Connect the four wires of the Harness to the MSD Ignition Control. 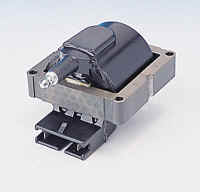 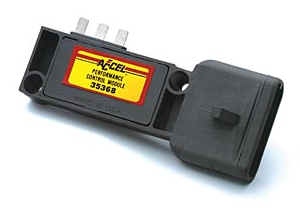 Make sure you have a good set of spark plug wires. Summit Racing carries the JBA Powercables P/N W06309.